There are different types of bicep tears based on which of the bicep tendon attachments is strained or torn:

A torn bicep injury is classified into one of three grades of severity based on how extensive or complete the tendon tissue is damaged and other physical criteria.

Grade 1:
A Grade 1 bicep tear is considered a “strain” and it occurs when the tendon is overstretched but does not get detached from the bone. Usually very minimal loss of mobility and strength.

Grade 2:
Occurs when the tendon is partially but not fully detached from the bone. Can cause some degree of mobility and strength loss.

Grade 3:
When the tendon attachment ruptures or tears completely away from the bone. This is the most severe type of bicep tear and it causes mobility loss and often requires surgical repair.

A bicep tear can be caused either by chronic overuse or by acute physical trauma such as in an accident. When the shoulder or arm is stretched or torn in an auto accident it can cause an acute tear of the biceps at the shoulder (proximal bicep tear). This type of tear in an accident almost always occurs in the long head tendon (on the outside of the shoulder). Biceps tears at the elbow (distal bicep tear) can be caused by auto accidents or by workplace injuries (such as lifting something very heavy).

A torn bicep injury is preliminarily diagnosed by a doctor based on medical history, symptoms, and physical examination of the arm. The physical examination alone will often not be able to rule other similar shoulder and arm injuries (such as a torn rotator cuff). The doctor’s initial diagnosis will usually be confirmed with an X-ray and possibly an MRI. The MRI is the only conclusive way to establish whether the bicep tear involves a complete or only partial detachment of the tendon.

The appropriate treatment for a torn bicep injury will depend largely on the type and degree of the bicep tear. For a Grade 1 or 2 bicep tear, treatment is usually limited to rest and over-the-counter anti-inflammatory medications such as ibuprofen. For more serious Grade 2 bicep tears, stronger anti-inflammatory medications might be required along with physical therapy. Physical therapy can help speed recovery and regain full range of motion and strength.

For the most serious torn bicep injuries surgery may be necessary. Surgery is always recommended in cases where the bicep tendon is completely torn away from the bone attached. Most doctors will also recommend surgery if the tendon is more than 50% torn away from the bone. Distal bicep tears at the elbow are also more likely to require surgery to make a full recovery.

Surgery for a torn biceps involves the surgical reattachment of the damaged and torn tendon to the bone. This is usually bone with some type of grafting that allows the tendon tissue to regenerate and eventually reform its attachment to the bone.

The best way to evaluate the potential settlement value of a torn biceps injury is to look at settlements and verdicts in prior cases involving a bicep tear and similar circumstances. Below are actual compensation awards in prior torn bicep cases. 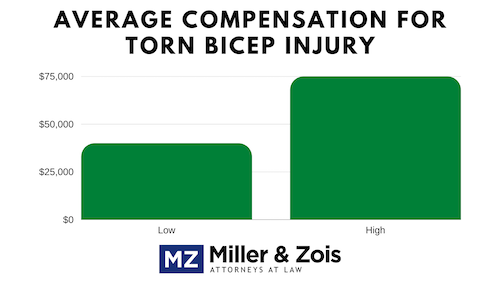 FAQs – Torn Bicep in Personal Injury Case
How much compensation can you get for a torn bicep?

The level of compensation you can expect for a torn bicep in a personal injury case will depend on the type and severity of the injury. The most serious types of bicep tears involve total tendon detachment and require reconstructive surgery. The typical settlement value of these cases is between $40,000 to $75,000.

What happens if you don’t fix a torn bicep?

If you don’t get any treatment for a torn bicep injury involving partial or complete detachment of the tendon from the bone, your arm will likely lose strength and mobility and could become permanently disabled.

Can a torn bicep heal on its own?

A serious bicep tear (where the tendon completely or partially detaches from the bone) will not heal on its own because the tendon will not reattach itself to the bone. Minor torn bicep injuries, where there is only a “strain” as opposed to an actual tear, will heal on their own.

How do you fix a torn bicep?

For a minor bicep tear, treatment is usually limited to rest and anti-inflammatory medications. For a Grade 2 or 3 bicep tear, surgery will often be necessary to reattach the torn tendon to the bone.

If you suffered a torn bicep injury in an accident, call our personal injury lawyers today to find out how much your case might be worth.