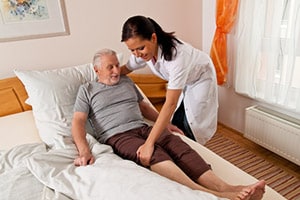 Tardive dyskinesia is a serious movement disorder causing sudden involuntary movements in the mouth, throat, and face. Tardive dyskinesia is usually caused by prolonged use of certain prescription drugs commonly used in the treatment of mental health disorders. Initial efforts to sue the manufacturers of the drugs that caused dyskinesia (e.g., Reglan) for product liability were largely unsuccessful. However, individuals who develop tardive dyskinesia from prescription psychotropic drugs can potentially sue the prescribing doctors for medical malpractice.

Tardive dyskinesia is a very serious facial and oral movement disorder resulting from neurologic damage. People with tardive dyskinesia are not able to control the movement of muscles in their face, mouth, neck and connected areas. The dyskinesia causes sudden, involuntary movements of these facial and oral muscles. These involuntary jerking and grimacing movement can be very severe and disabling, making it difficult to chew, drink and swallow. They also cause significant disfigurement.

The involuntary movements of tardive dyskinesia are triggered by abnormalities inside the person's brain. The brain normally controls and coordinate all of the muscles in the body with electrical signals transmitted across nerve pathways. When someone has tardive dyskinesia these signals from the brain to the facial and oral muscle are distorted resulting in the involuntary movements.

Tardive dyskinesia is a not a disorder that just occurs on its own from natural events or injury. Rather, tardive dyskinesia is caused by prolonged use of certain prescription drugs that are used in the treatment of mental health conditions such as bi-polar and schizophrenia. These medications are known as antipsychotics or psychotropic drugs.

When the link between certain mental health drugs and tardive dyskinesia was first documented, it prompted the FDA to require a black-box warning label on certain drugs. This invariably led to a wave of product liability lawsuits against drug manufacturers. For the most part these product liability lawsuits against the drug manufacturers have not been successful and few law firms are taking these cases at this point.

This does not mean, however, that individuals who develop tardive dyskinesia from extended use of prescription medications have no legal recourse. Doctors who prescribe medications known to cause tardive dyskinesia have an obligation to use appropriate care in administering those drugs and then carefully monitoring the patient's response to those drugs. Doctors, mental health facilities, and nursing homes can be sued for medical malpractice in connection with tardive dyskinesia. Malpractice theories in these cases often involve allegations that doctors or facilities prescribed the antipsychotic drugs unnecessarily, left patients on the medications for too long, and/or failed to properly monitor progress and response to the medications.

Below are verdicts and reported settlements from medical malpractice cases by plaintiff's who developed tardive dyskinesia from prescription drugs.

If you have been diagnosed with tardive dyskinesia as a result of taking prescription drugs for mental health conditions, autism or other disorders, you may have a claim against your prescribing doctor for medical malpractice. Call the malpractice lawyers at Miller & Zois at 800-553-8082 or contact us online.