Sphenoid bone fractures and sphenoid sinus fractures are severe injuries. When a patient suffers a sphenoid fracture, there is a significant chance of brain injury or death.

What is the sphenoid?

The sphenoid is a sinus. There are four sets of sinuses (maxillary, ethmoid, frontal and sphenoid) in our skulls distributed around the eyes. These sinuses serve many purposes. One purpose is to reduce the impact a blow to the head.

What is the sphenoid bone?

The sphenoid bone is one of seven bones that forms the base of the cranium. It looks like a small butterfly with its wings extended. The ligaments to the sphenoid bone can ossify.

Why is a fracture of the sphenoid bone so serious? 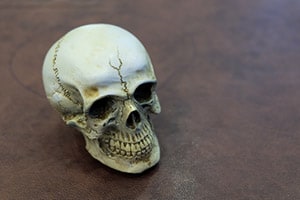 Our brains have a strong structure of bones to protect it. Any type of fracture to the skull is dangerous and can cause swelling. It is also important to keep in the mind that to suffer a sphenoid bone fracture the patient most likely had a significant blow to the head. We see these in automobile accidents and sometimes in slip and fall cases. If you have suffered that strong an impact to the head that your sphenoid bone is fractured, you have likely suffered a head trauma that puts you at significant risk of severe injury or death.

How is a sphenoid bone fracture diagnosed?

A CT scan is the most likely test to reveal a sphenoid fracture. A cerebral blood flow study might also indicate the possibility of a fracture.

Below are recent settlements and verdicts in cases involving a sphenoid injury. Keep in mind that the compensation is not just for the sphenoid injury alone but also for traumas that accompany such an injury. Also remember that these settlements and verdicts are not an accurate predictor of the outcome of any particular case. But understanding what these cases have settled for and what juries have awarded can inform your understanding of the potential range of values in your case.

If you have been in a car or truck accident or medical malpractice, you should contact an attorney as soon as possible. The rush is because there is a limited window to both collect evidence to bring a claim. We can help you and no cost or obligation. Fill out our free case review form today or call 800-553-8082.