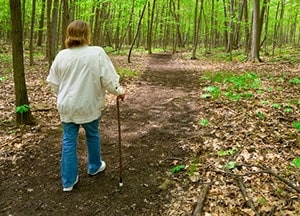 This is a medical malpractice case lawsuit brought against Sheppard Pratt, a mental health provider woman in Baltimore County. A woman suffering from dementia had an awful fall that caused a hip fracture. The claim is that she was a fall risk there either was not an appropriate protocol or that protocol was not followed.

This is not a nursing home case but it is conceptually very similar. This woman's claim was filed by her malpractice attorneys in Health Claims Arbitration on August 22, 2016. It is the 418th medical negligence lawsuit filed in Maryland in 2016. The Baltimore County Circuit Court case number is 03C16010643.

Plaintiff is admitted to Sheppard Pratt, suffering partly from dementia. One month after her admission, she is improperly supervised and falls, striking her head on a pole and landing on the floor. She is transported to Greater Baltimore Medical Center's (GBMC) emergency room. This occurs as a deviation from her plan of care, which states that she should only "ambulate with assistive device/wheelchair with staff only."

At GBMC, the staff diagnoses her with a right hip fracture. This requires surgical repair. It is further discovered that plaintiff fell four additional times while in her one month stay at Sheppard Pratt.

She alleges that as a result of the nurse's negligence, she has endured severe physical pain and suffering.

If you have suffered as a result of the negligence of a doctor or medical facility, our law firm can help you. You are entitled to justice and monetary compensation for the harm that has been done, and Miller & Zois has a very long history of results in medical malpractice cases in Maryland, earning large verdicts and settlements. Call Miller & Zois today to speak to a caring medical negligence attorney who can help you, at 800-553-8082, or get a free online case review.