S. marcescens can frequently be seen on tile and shower corners or at the water line of a toilet bowl where it appears as a pink or orange filmy residue. Seldom used toilets are actually the ideal breeding ground for s. marcescens because of the standing water in the bowl. Aside from shower tiles and toilets, the s. marcescens bacteria can also usually be found in soil and in human and animal feces. 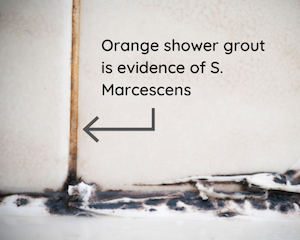 At one point in time, serratia marcescens was believed to be a completely harmless organism. Recently, however, scientific research has shown that s. marcescens can be a harmful bacterium. Serratia marcescens is now known to be a common cause of human infections in the respiratory tract, digestive tract, and in wound site infection.

Once s. marcescens has established itself on a surface, completely eliminating it can be very difficult. Total eradication of the bacteria can be only accomplished with a bleach-based disinfectant or cleaner. The best methods for controlling the development and spread of s. marcescens include:

The difficulty of treating infections caused by s. marcescens is one of the reasons why prevention is often considered to be so important. This is particularly true in a hospital setting where s. marcescens is known to be a problem. Hospitals have an obligation to ensure proper cleaning and disinfecting of equipment and facilities to prevent s. marcescens from developing and infecting patients.

When a hospital acquired infection is related to serratia marcescens, it is most likely the result of negligent practices at the hospital such as failures to properly clean surfaces on a regular basis. Hospital patients who develop infections from s. marcescens at the hospital may be entitled to bring a hospital malpractice lawsuit and get financial compensation for their injuries.

If you were injured as a result of hospital negligence, contact our medical malpractice attorneys for a free case review and evaluation. Call us at 800-553-8082 or contact us online.