Placental abruption is most common during the third trimester of pregnancy, but it can occur as early as 20 weeks. When a placenta ruptures, the connection with the fetus is broken, depriving the fetus of essential nutrients and oxygen, its waste disposal system and its protection against infection.

This can cause distress for the mother and birth injuries or death to the child. Placenta previa is sometimes confused with placental abruption, but they are very different. With placenta previa, the placenta partially or entirely covers the cervix. The common thread is the concern about bleeding.

If you believe your child has birth injuries that may be from medical malpractice, call us today at 800-553-8082 or get a free, no-obligation case evaluation online.

There are also underlying medical ailments that can predispose a woman to an increased risk of placental abruption. These conditions include high blood pressure, diabetes, autoimmune diseases, like lupus or rheumatoid arthritis, that affect blood vessels. If the mother has these problems, doctors should have a heightened concern about the risk of an abruption.

The diagnosis of placental abruption is a clinical diagnosis. So you look at certain signs and symptoms from the mother like abdominal pain and, in particular, vaginal bleeding. You also look a the fetal heart strips for signs of fetal distress or a nonreassuring heart rate. If there is a concern, a sonogram is often a good place to start.

But they vary significantly. The symptoms may appear singly, in combination, or there may be no symptoms because the bleeding is hidden. Defense lawyers and their experts in these lawsuits say as many as 50%^ of abruptions have hidden bleeding. (This is almost certainly an exaggeration to make these abruptions seem impossible to predict or diagnose.)

The reason for an abruption without bleeding is that the bleeding is hidden because the blood insinuates itself between the membranes and uterus, and then escapes through the cervix, causing external hemorrhage. You do not see bleeding until the separation nears a complete level when there is no longer blockage of blood escape into the vagina. 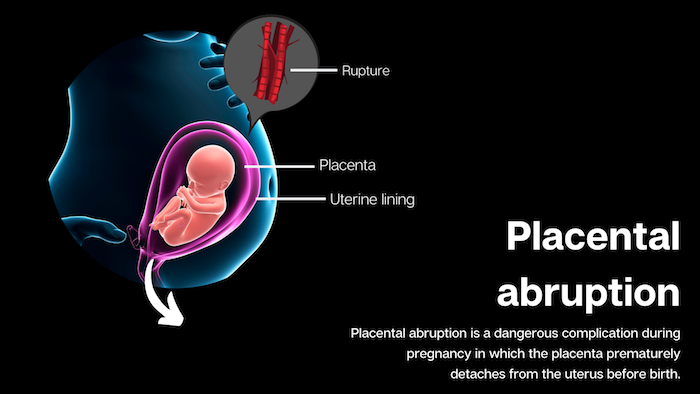 Doctors need to know this and not drop their guard when they have evidence of a possible abruption. Again, the confusion with placenta praevia comes into play here because you can rule out placenta praevia with an ultrasound but you cannot diagnose an abruption with certainty.

Placental abruption is suspected when a pregnant mother has sudden localized abdominal pain with or without bleeding. The fundus may be monitored because a rising fundus can indicate bleeding.

Again, an ultrasound may be used to rule out placenta praevia but is not diagnostic for abruption. The diagnosis of abruption is often one of exclusion if imaging does not confirm an abruption. This means the doctor must consider other possible sources of vaginal bleeding or abdominal pain and rule them out to diagnose placental abruption.

The Degree of Abruption Matters

The placenta has an excess capacity to provide for the fetus. Even if 40 percent of the placenta is abrupted, the baby will still be fine and will continue to get the oxygen and nutrients it needs while continuing to serve as a waste disposal system. The key is whether the separation of the placenta stops there.

Once the diagnosis of placental abruption is made, the question is what to do. There are a number of management choices at this point depending upon the degree of concern that includes facilitating delivery to avoid more severe complications. Another less extreme option is bed rest.

Many medical malpractice cases stem doctors missing the warning signs of an abruption. While less than one percent of pregnant women suffer placental abruptions, including smokers, drug users and diabetics are at great risk as are women over 40, carrying multiples, and women who have had several children in the past.

The standard of care requires relevant risk factors are noted by the OB/GYN early in the pregnancy along with the appropriate follow-up. In the case of an abruption, the standard of care dictates that the doctor recognizes these risks factors and order the appropriate tests and follow-up to monitor the risk. If the OB/GYN's fails to properly diagnose or treat abruption, it may cause harm to the mother and child that may be medical malpractice.

Getting an Experienced Malpractice Lawyer on Your Side

There is no question that placental abruption can be spontaneous and that a pregnancy can be lost due to placental abruption despite the quality prenatal care. But too many children suffer life-threatening injuries because a doctor should have discovered the symptoms of abruption and acted to protect the child. If your child has suffered a birth injury because a doctor improperly or unnecessarily used forceps during the birth of your child, our law firm has the experience and resources to help you both get the cash compensation you deserve for the harm that has been caused.

We are based in Maryland but handle birth injury cases throughout the country. Call Miller & Zois today and speak to a childbirth injury medical malpractice attorney at 800-553-8082 or get an online case evaluation.