Osteomyelitis is a very serious medical condition characterized by inflammation of the bone and bone marrow that can be fatal if not properly treated. Osteomyelitis can be caused by bacterial or fungal infections.

If caught early enough the condition is treatable with antibiotics and, in some cases, surgery. However, if left untreated -- often because of a misdiagnosis -- the infection may spread to other parts of the body or cause bone death. If bone death occurs, amputation may be the only option to prevent the spread of infection.

If you have a potential osteomyelitis medical malpractice case in Maryland, call us at 800-553-8082 or get a free, confidential online consultation here.

Osteomyelitis is caused by infectious organisms. These organisms can enter the body through several pathways. For instance, trauma that breaks the skins can introduce bacterial organisms into the body. A patient may contract osteomyelitis during orthopedic surgery, especially if the hardware is used to fix the fractured bone.

Osteomyelitis may also occur if bacteria from major local infections such as cellulitis or necrotizing fasciitis enter the blood stream. Perhaps not surprisingly, one of the most common sources of osteomyelitis is staphylococcus aureus, a member of the normal flora found on the skin and mucous membrane. If the skin is broken, this organism has a direct pathway into the body.

Once the bone is infected, leukocytes are attracted to the infected area. In an attempt to kill the infecting organisms, the leukocytes release enzymes that lyse the bone. Bones are highly vascular. As a result, pus from the immediate infection disrupts the blood flow to local vessels causing bone death. To reformulate the bone, the body may release osteoblasts.

These cells create new bony structures that are very visible bone deformities on diagnostic tests such as x-rays.

Who is at high risk for contracting osteomyelitis?

The following individuals are at high risk for contracting osteomyelitis:

What are the signs and symptoms of osteomyelitis?

It is important to note that sometimes there are no direct signs of immediate infection.

How is osteomyelitis diagnosed?

By far the most common way to diagnose osteomyelitis is through a CBC blood test. If an infection is occurring, the test will likely reveal an elevated White Blood Cell count (WBC).

White Blood Cells are responsible for fighting off most infections in the body. Normal levels range from 4,500 – 10,000 white blood cells per microliter. Anything above this may indicate an infection is occurring. 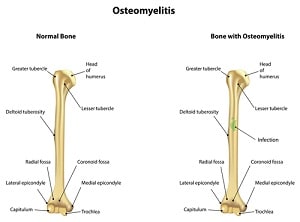 X-rays are a very powerful tool for diagnosing osteomyelitis. Generally speaking, it is cheaper to get an x-ray and nearly every healthcare facility has an x-ray machine nearby. Moreover, despite their limitations in revealing damage to soft tissue, x-rays are very good at visualizing bony structures. However, damage may not be visible until osteomyelitis has been present for several weeks.

More expensive tests that can also be used to provide detailed images include Computerized Tomography (CT scans) and Magnetic Resonance Imaging (MRI). Both can provide exceptionally detailed images of the bone and the surrounding soft tissue.

A bone biopsy can reveal what particular organism is causing the osteomyelitis and thus is an important tool for determining what antibiotics should be used for treatment.

How is osteomyelitis treated?

When is the failure to diagnose or treat osteomyelitis medical malpractice?

Medical malpractice typically occurs when a physician fails to recognize and respond to the signs and symptoms of osteomyelitis. On many occasions, the patient may be identified as high risk for osteomyelitis simply by taking a thorough history. Again, a patient with a recent history of trauma, infection, or orthopedic surgery is at high risk for developing osteomyelitis.

Commonly, the patient presents with symptoms of severe pain, redness, and swelling in the location of the infection. Medical malpractice may occur if the physician fails to diagnose osteomyelitis by performing the appropriate diagnostic testing or fails to treat the condition by prescribing the appropriate antibiotics. Many times surgery may be avoided with the timely administration of IV antibiotics. Thus, it is essential for the physician to pay close attention to the patient's symptoms.

Below are some sample verdicts and settlements in Maryland and from around the country in osteomyelitis cases. These are just examples of what a case involving the failure to diagnose and/or treat osteomyelitis might be worth. These verdicts are not representative of the outcome of each case. It is both trite and true: each case is different with unique facts and challenges. 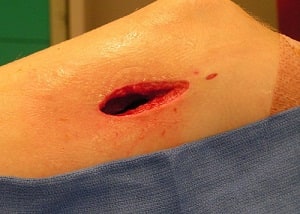 If you think you have a potential wrongful death malpractice claim for someone you loved because a doctor failed to diagnose an aneurysm, call 800-553-8082 or get a free no obligation case evaluation.