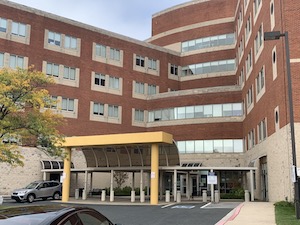 Hopkins Bayview is located in southeast Baltimore on Eastern Ave. The Hopkins Bayview hospital and the larger Johns Hopkins Bayview Medical Center campus is massive. The hospital and its related facilities cover several blocks and can be seen from miles in any direction. Bayview is a very large and busy hospital. With 411 staffed bed, Bayview hospital is the 5th largest hospital in Maryland. Bayview has one of the biggest and most comprehensive neonatal intensive care units (NICU) in the state, with almost 50 staffed neonatal beds. Bayview is also home to the Johns Hopkins Burn Center, which is the only adult burn center in Maryland.

Hopkins Bayview hospital has an excellent reputation and is widely considered to be one of the better hospitals in Maryland. Bayview has consistently received very high grades for patient care and safety. In the most recent report on hospital safety from the healthcare watchdog group Leapfrog, Hopkins Bayview hospital was one of only a dozen hospitals in Maryland to receive a letter grade of A.

There is no doubt that Bayview is a good hospital by any standard, but this does not mean that nothing ever goes wrong. Like any other busy, urban hospital, mistakes and medical negligence are a regular problem at Bayview. This is inevitable when you have thousands of patient admissions each year. Even the very best hospitals in the country regularly make mistakes and commit medical malpractice.

When Hopkins Bayview gets sued for medical malpractice they usually prefer to settle legitimate claims. This is typical for all hospital defendants in malpractice cases. Hospitals generally make better defendants in malpractice cases because are very concerned about their public image and they will settle claims to avoid negative publicity. Hospitals are self-insured so they have the freedom to settle cases without any approval from an insurance carrier or concern with how a settlement will impact their malpractice rates.

In our experience, these generalizations about hospitals preferring to settle very much apply to Hopkins Bayview. This does not mean that Hopkins Bayview will simply make an immediate settlement offer any time they get sued. Bayview will invest time and money going through the discovery phase of a case to evaluate whether they think the allegations of medical malpractice have any validity. Once they go thru this process and if they determine that the malpractice claim are not frivolous, Bayview will typically shift gears and make a strong push to settle out of the case for a reasonable amount.

Hopkins Bayview and its defense team are painfully aware that the odds are stacked against them if they go to trial in Baltimore City. This makes them even more willing to settle legitimate claims and avoid a headline grabbing very from a Baltimore City jury.