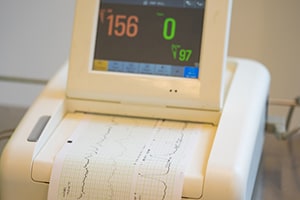 This is a survival and wrongful death medical malpractice suit filed by a widow who lost her husband who had been treated at Chester River Hospital in Kent County. The gist of the case is that the ER doctors and cardiologist who consulted with them failed to diagnose a heart attack. It was filed in Maryland Health Claims Arbitration on February 6, 2017. It is the 64th medical malpractice case filed in 2017 in Maryland.

A patient goes to the emergency room at Chester River Hospital in Chestertown with sharp pain in his left upper chest and shoulder. Chester River is a small, 57-bed hospital owned by the University of Maryland. Still,

The patient informs the emergency room staff that that he has a significant cardiac history for heart attack, coronary artery disease, stents, quadruple bypass, and a pacemaker. He provides a whopping list of nine medications that he is taking the ER nurse. But instead of recording the medication, the nurse indicates that the medications were provided during a visit three years ago.

The patient has an electrocardiogram (ECG) done which shows sinus bradycardia, a low heart rate, a first-degree atrioventricular block and T-wave abnormality. So clearly there are some bad things happening to a man who could not be at more risk for a cardiac event. The hospital does a blood test, but does not provide a nuclear stress test. Defendants inform the patient and his wife that the ECG and blood tests are normal and that plaintiff has a pulled muscle in his left shoulder. He is given a prescription for cyclobenzaprine - which is a muscle relaxant -- and is discharged.

The next day, defendant doctors review the ECG and cross out "non-specific intraventricular block" and write "left bundle branch block." By reviewing the record, the family malpractice attorney claims that the defendants should have known that the patient did not have a prior medical history significant for this or an atrioventricular block. Defendants did not call patient regarding this information. The day after he is discharged from the hospital, plaintiff is starts becoming lethargic and fatigued.

Another day later, the man's wife finds him unresponsive. She calls 911, and paramedics find him in cardiac arrest when they arrive. They attempt CPR and rush him to the ER. Tragically, he is pronounced dead fifteen minutes after his arrival at the ER. The cause of death includes coronary artery disease, sick sinus syndrome, hypertension, and dyslipidemia.

Plaintiff alleges that cyclobenzaprine is a contraindication for a patient with a history of cardiac disease as it is well-known to exacerbate these conditions and cause cardiac arrest and death.

If you or a loved one have suffered a permanent injury or death due to the negligence of a doctor or hospital staff, Miller & Zois can help you. We have a long history of obtaining large verdicts and settlements in medical malpractice cases. Get a free online case review or call us today to speak to a medical malpractice attorney at 800-553-8082.