This page will look at drunk or impaired driving accidents in Maryland. Our Maryland drunk driving car accident lawyers look at the average settlement payouts in drunk driving injury cases, how having a drunk driver as a defendant impacts your compensation claim, and how to maximize the settlement amount of your lawsuit. 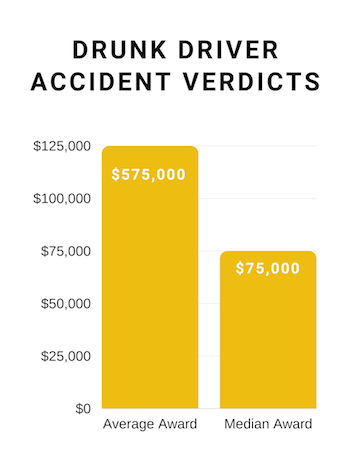 All fifty states and Washington DC legally require drivers' blood alcohol content (BAC) to be 0.08% or less. Although drunk driving incidences have reportedly declined by half over the last thirty years, drunk driving remains a serious problem in Maryland and the United States.

In October 2016, the Maryland General Assembly passed "Noah's Law," named after a Montgomery County police officer who was killed by a drunk driver during a traffic stop. With the passage of this legislation, which enforces stricter drunk driving penalties including the usage of an ignition interlock device, Maryland's drunk driving laws are among the toughest in the United States.

Recovering from a car accident is even harder when you know the at-fault driver chose to get behind the wheel after drinking. If you are seriously injured in an accident caused by a drunk or impaired driver, you can sue that driver and get monetary compensation just like in any other accident case. Proof that the other driver was intoxicated at the time of the car crash is powerful evidence of negligence in the case.

Our law firm represents victims of serious motor vehicle accidents. Many of these claims our attorneys handle involve victims who have been harmed or killed by intoxicated drivers. If you or a loved one has been injured or killed in a car accident caused by a negligent or drunk driver, contact our Maryland car accident lawyers today.

Both of these numbers are higher compared to regular auto tort cases. The main reason for the higher compensation amounts is drunk drivers cause more serious accidents.  Another reason drunk driver accident lawsuits sometimes have higher settlement valuations is simple. Juries have zero sympathies for drunk drivers and this translates into bigger verdicts. But as we explain below, this does not apply to every car accident with a drunk driver.

Yes. There is insurance coverage in every drunk driving accident case that occurs in Maryland. If a drunk driver injured you or a loved one, you have a claim.

Is a Maryland Accident Case Worth More If It Was Caused By a Drunk Driver?

Sometimes. The settlement payouts in DWI/DUI auto accident cases are largely the same as other accident cases our lawyers handle throughout Maryland. But some differences impact how the case should be fought and what the compensation amount of a lawsuit might be.

The question of whether a drunk driving car crash case is different from other accident cases hinges on whether the drunk driver denies liability. If the driver claims that he or she was not at fault for the accident, any evidence of the driver's intoxication should be admissible to prove fault in the crash.

However, if the defendant concedes liability for the accident, your lawyer cannot provide evidence to the jury in a Maryland court that they were drunk.

There are some exceptions to this rule. For example, if the defendant was on the job or in a work vehicle their intoxication can be used as evidence in a negligent entrustment claim.

What Happens If I Was a Passenger in a Car Driven by a Drunk Driver?

Ultimately, our lawyers believe there are cases when getting into a car as a passenger with a drunk driver constitutes contributory negligence under Maryland law. But there are also many instances when insurance companies claim that a passenger knew things that they could not have possibly known. We have had success in fighting this defense in jury trials.

Can a Defendant Found Guilty in a Criminal Trial Dispute Responsibility?

No. A guilty plea or verdict alone does not constitute liability in a civil case in most states.

How Do Drunk Driving Lawyers Prove That a Driver Was Drunk?

If you have a test that shows a blood alcohol content (BAC) of .08 or above, you are presumed to be under the influence of alcohol according to §11-174.1 of the Maryland Transportation Article. Lawyers seek the expert counsel of toxicologists in these cases. Toxicologists study the effect of drugs, chemicals, and other substances on living organisms.

It is useful to have a toxicologist explain what BAC means and the impact it would have on the driver's ability to operate a motor vehicle in the context of a particular accident. This is because the plaintiff has to explicitly make a causal connection between the intoxicated state and the driver’s behavior.

The language that lawyers use against drunk drivers is also important. They can reinforce the fact that alcohol caused the accident by continually emphasizing that the driver’s BAC was above the legal limit and that they chose to drive anyway.

Our lawyers handle serious car accident cases. We have recovered millions for our clients over the years and can help you and your family get peace of mind during this trying time. If you or a loved one has been injured or killed in a car accident caused by a negligent driver, you need someone to fight for you. Call us at 800-553-8082 or contact us online.