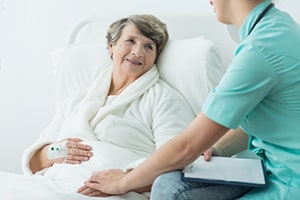 Compartment syndrome occurs when swelling or bleeding in an area creates excessive pressure within a particular muscle compartment area in the body. The compartmentalized bleeding or swelling is typically the result of a recent physical injury. The pressure can prevent blood from circulating to the affected area and require emergency surgery. The failure to see the signs and symptoms of compartment syndrome and the failure to rule out this condition is sometimes results in medical malpractice lawsuits. Our lawyers handle these type of cases.

What is Compartment Syndrome?

Muscles, organs, and other parts within the body are generally separated into areas referred to as "compartments." These compartments within the body are actually separated by internal segment walls of connective tissue known as fascia. When a physical injury occurs fluid and/or blood will often accumulate and trigger swelling within the injured compartment of the body. The fascia tissue which forms the walls separating the various compartments is not capable of expanding very much. As a result, when swelling from an injury pressure within the compartment will often rise significantly. When compartmental pressure gets to a certain point it will actually block the normal circulation of blood to the tissue or organs within the compartment. Without a constant supply of oxygen from blood flow, the organs or tissue within the injured compartment can quickly begin to decay. This can have serious consequences including functional loss or in some cases death. The areas of the body that are most susceptible to compartment syndrome are the arms, legs and abdominal area.

What are the Symptoms of Compartmental Syndrome?

Compartmental syndrome is frequently a complication resulting from physical injuries suffered in car accidents, slip and falls, workplace incidents and other types of personal injuries that frequently lead to litigation. Compartment syndrome can also be at issue in medical malpractice cases. Listed below reported settlements and verdicts from personal injury and medical malpractice cases in which compartmental syndrome was involved.

The lawyers at Miller & Zois have a well-documented track record of success in both personal injury and medical malpractice cases. If you or a family member have suffered permanent injury from compartment syndrome resulting from the negligence of someone else, contact us today to see if you might be entitled to legal compensation. Call us at 800-553-8082 or get a free online consultation.