Cephalopelvic disproportion (CPD) occurs when the size of a mother's pelvis in misaligned with the size of the infant's head during childbirth. "Cephalo" refers to head and "pelvic" refers, of course, to the pelvis. "Disproportion" means they do not fit together.

The real risk is not an infant that is too small for the pelvis, but rather an infant that is too big. During the delivery, the baby has to navigate his or her head to get through successfully. Instead of dropping through, he or she has to screw his or her way through the pelvis. If the baby gets stuck, there is a real risk of oxygen deprivation, which can lead to catastrophic injury and death.

Failure to recognize or appreciate the clinical presentation of probable cephalopelvic disproportion is medical malpractice if harm is caused to the child. Sometimes doctors just do not see the problem when they should have, or they use medicine or medical devices that make the problem worse.

One common problem that can cause cephalopelvic disproportion is using another mechanical device after the first one fails. The ACOG Practice Pattern #17 has this to say:

”Persistent efforts to obtain a vaginal delivery using different instruments may increase the potential for maternal and fetal injury and often indicates cephalopelvic disproportion... the weight of available evidence appears to be against attempting multiple efforts at operative vaginal delivery with different instruments unless there is a compelling and justifiable reason.  [One] study reported that the incidence of intracranial hemorrhage was highest in infants delivered by combined vacuum and forceps compared with other reported methods of delivery. The incidences of other injuries also were increased with combined methods of operative vaginal delivery.”

Often, the better plan is to do an emergency c-section which can be done in a matter of minutes.

If you believe that your child was harmed by medical malpractice, call us at 800-553-8082 or get a free online case review.

How is CPD diagnosed?

CPD is usually diagnosed before labor begins. But doctors should know of the risk of a large baby. Usually, an ultrasound is used to estimate fetal size, along with a pelvic measurement to estimate proportion.

Pitocin is Counterindicated with CPD 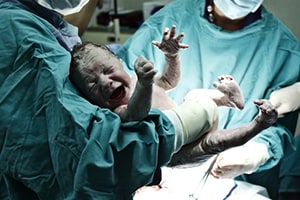 Doctors who do not refrain from the injudicious use of Pitocin can cause uterine hyperstimulation and iatrogenic fetal distress that may make CPD or shoulder dystocia an insurmountable challenge. It is amazing how many medical malpractice lawsuits involve CPD.

Below are sample settlements and verdicts in lawsuits alleging negligence in taking the appropriate precaution necessary to navigate known or potential cephalopelvic disproportion. These are a tool in helping better understand the potential value of these claims. But these cases cannot predict the value of your claim. There are simply too many factors in each case to try to predict the value of an individual claim.

Getting a Malpractice Attorney

If you have suffered from medical malpractice from a misdiagnosis, we can help you learn about your options and determine whether there is a path for you to get compensation for the harm that has been done.

Call us today at 800-553-8082 to discuss strategies to get you compensation for your loss. There is NO COST OR FEE of any kind for this case evaluation. You can also get a free online case review.