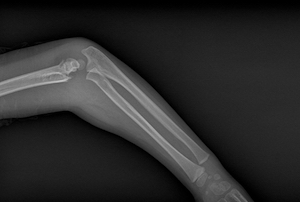 Let's understand the leg first because this has an impact on how much your case is worth. The leg is comprised of three bones. The femur, the largest bone in the human body, runs from the hip to the knee through the thigh. The lower leg is supported by two bones, the tibia, and the smaller fibula. Additionally, the kneecap is comprised of a flat, triangular bone called the patella.

Broken leg injuries are a frequent cause of emergency room visits. Femur fractures are particularly dangerous and can be fatal due to a high volume of blood loss. Broken legs can have lasting physical and psychological impacts, such as PTSD and osteoarthritis. Severe injuries can result in disability, affecting a victim’s long-term ability to work and quality of life.

Our personal injury lawyers have handled many broken leg injury claims over the years. So this page is also a job interview. If you have a personal injury claim involving a broken leg in the Baltimore, Maryland, and Washington, D.C. areas, our attorneys want you to call us. (Our lawyers have referral sources in almost all 50 states if you need help finding an attorney.) 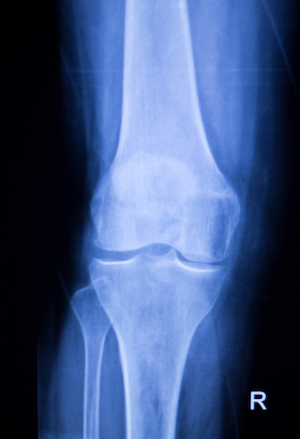 A common question that accident victims ask is, what settlement amount can I expect for a broken bone injury? The compensation amounts awarded for broken leg bone injury claims vary on the type of break.

For example, for a fibula or tibia fracture, the median recovery is approximately $85,000. The number more than doubles to $167,000 for a broken femur.  You would expect that average settlement for a broken femur to be higher because it is typically the most serious bone in the leg to break.

For multiple fracture or comminuted cases, when there is more than one fracture or the bone splinters into multiple fragments, the median verdict rises to $193,000.  While these statistics do not distinguish between the two, our car accident lawyers can tell you from experience that the average fractured fibula is usually worth more than a fractured tibia.

Still, the compensation amount for femur or comminuted fractures is not always higher than other fractures. A major factor when determining the settlement amount is how the broken bone has affected  the broken leg injury victim. Did the victim lose time at work? Do they suffer from chronic pain? Is there scarring?

“The value of broken leg injury claims depends on the type of fracture and the effect of the fracture on the patient’s health and ability.”

Where the bone breaks is also important to compensation payouts. For example, a broken shin in the lower third of the bone are particularly troubling for adults. After the body has finished growing, the blood supply to the tibia slows, making it difficult to keep the bone straight during the healing process. Additionally, certain fractures, such as tibial plateau fractures, put victims at a high risk of muscle and nerve damage.

Another important factor is the cost of the medical treatment that the victim has received and will need in the future. For example, did the patient require extensive surgery? How big was their emergency room bill? Do they go to physical therapy?

Finally, how the accident happened informs how much your case might be worth. Using car accidents as an example, the median value for pedestrians is $125,000.  That number falls to $97,300 for passengers. The median compensation payout in a truck accident is greater at $160,500.

If you sustained a broken leg injury in a fall accident, car accident, or workplace accident, our personal injury lawyers may be able to help you. To discuss your case with our legal team at no charge, call (800) 553-8082 or fill out our online form.

Sample Broken Leg Settlements and Verdicts
Another tool to calculate expected settlement amounts and jury awards is to look at compensation for broken fibula, tibia, and femur fractures is to look at stories of other broken leg lawsuits. You look at how those injuries resolved, whether by settlement or at trial, and what was the settlement compensation payout or jury award.
This is a wildly imperfect tool - no two cases are identical. But it is still helpful, along with other tools, in projecting a range for a settlement compensation payout or jury verdict for your lawsuit.
Below, our lawyers give you a summary of the lawsuit and how much compensation was given for the broken leg.
Get More Verdicts and Settlements
How Much Is a Broken Leg Worth in a Lawsuit?

What Impacts the Value of a Broken Leg Case?

Three primary factors drive the settlement amount of broken legs in personal injury cases: (1) the type and location of the fracture, (2) how the broken leg impacts the victim's life, and (3) which bone (femur, tibia, or fibula) is fractured.

Are Broken Leg Injuries Hard to Prove in a Lawsuit?

No. Broken leg injuries can be identified on a simple x-ray so they are easy to prove in a lawsuit. The settlement value of a fractured leg is on far more solid ground than many other injuries because there is such a clean and objective way to demonstrate injury. 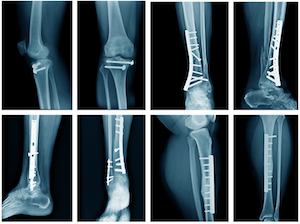 Prevalence of posttraumatic stress disorder in acute trauma patients by Noah Joseph et al., OTA International, March 2020.
Post-traumatic stress disorder does not just affect soldiers—many people who have experienced emotional or physical trauma suffer from PTSD. This includes those who have suffered severe bodily injuries. Researchers in this study were interested in the prevalence and risk factors of PTSD in trauma patients. They looked at 400 patients in a US facility and found that 26% of trauma patients—one in four—tested positive for PTSD shortly after their injury. Interestingly, while the severity of the injury did not make people more or less likely to have PTSD, being struck by a car as a pedestrian was among the predictive factors.

Age-based differences in the disability of extremity injuries in pediatric and adult occupants by Michaela Gaffley et al., Traffic Injury Prevention, September 2019.
The study aimed to compare motor vehicle accident injuries of the arms and legs in children and adults. Specifically, researchers wanted to know if age affected the likelihood that these injuries would result in a disability. Using the National Trauma Data Bank–Research Data System, they found that older adults were significantly more likely to be disabled from these injuries. Children’s bodies, the researchers explain, have a greater capacity to heal bones. Also, researchers found that disability was more common than death with these injuries and that impaired ability to move the extremities was the most common disability.

Predictors of Peripheral Vascular Injury in Patients with Blunt Lower Extremity Fractures by Lobsang Marcia and Dennis King, Annals of Vascular Surgery, May 2019.
To prevent interrupted blood flow and amputation after trauma to the legs, doctors must quickly identify damage to the veins. In this study, researchers identify risk factors for vascular injury to help emergency room doctors and orthopedic surgeons treating broken legs know when they should be double-checking for interrupted blood flow. By looking at leg injury victims over two years at a hospital, the authors found vascular injuries are more likely to be present with open tibia-fibula fractures, especially those located in the mid-shaft.

Incidence of Lower‐Extremity Fractures in US Nursing Homes by Kathryn Sine et al., Journal of the American Geriatric Society, February 2019.
Researchers were interested in the rate of lower-extremity fractures in nursing homes. These injuries can prove fatal in an elderly population. Looking at Medicare-enrolled nursing home residents over a year-long period, the authors compared leg fractures to hip fractures, a more commonly discussed problem for elderly people. They discovered that those who broke their legs were more likely to be immobile, dependent, overweight, and diabetic. Simply put, severely functionally impaired individuals are at a higher risk, suggesting the need for better strategies to prevent these injuries in these patients.

Effects of passenger car front profile and human factors on pedestrian lower extremity injury risk using German in-depth accident data by Bingyu Wang et al., International Journal of Crashworthiness, January 2018.
The authors of this study used accident data to better understand how the engineering of a vehicle, impact speed, and the age and weight of the victim affects the likelihood of a lower-extremity injury in a pedestrian crash. The author’s main takeaway was that higher speed collisions and bigger cars led to a higher likelihood that the pedestrian would suffer a lower-extremity injury.

Hire a Lawyer Who Fights for You

If you or a loved one was injured due to someone’s negligence, you have a legal right to compensation. The Maryland personal injury attorneys at Miller & Zois handle serious car accident, workers’ compensation, and premises liability personal injury cases. To get a free consultation about your personal injury or wrongful death claim, call (800) 553-8082 or fill out our online form.