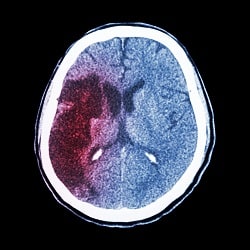 A man went to see an internal medicine physician at Johns Hopkins Hospital with complaints of increased thirst, urinary frequency, dizziness, confusion, fatigue, and headaches. The doctor reviewed an MRI study and a diagnostic lumbar puncture procedure that the man had previously undergone, which showed brain and cerebrospinal fluid abnormalities. The doctor initially thought that the abnormalities indicated "diabetes insipidus," a disorder that occurs when the body can't regulate salt and water, causing thirst and frequent urination. The man was never recommended for a brain lesion biopsy or a neurosurgical consultation.

For the next eight months, the man's medical condition was managed by the internal medicine doctor, who ordered three brain MRIs and two lumbar punctures during that time. Both studies, along with the man's worsening symptoms, continually demonstrated a decline in the man's condition.

Due to his progressively worsening condition, which included severe dizziness and double vision, fatigue, memory problems, and difficulties with complex tasks, the man and his wife relocated to California to be closer to family. Finally, after a neurosurgical consultation in California, the man was referred for a diagnostic brain lesion biopsy, which identified a brain tumor and a type of chronic immune cell inflammation that increases the body's susceptibility to infection.

As a direct result of the brain lesion biopsy, the man was diagnosed with a multifocal germinoma brain tumor, a germ cell tumor involving the ventricles and extending into the cervical spine. He started radiation therapy with positive results, and follow-up diagnostic imaging identified a stable disease with no residual brain lesions.