An aneurysm is a bubble in an artery. You can have aneurysms anywhere. There are commonly aneurysms in the brain, aorta, leg, eye, and brain. A ruptured aneurysm comes with potentially serious consequences. Medical malpractice lawsuits are often filed because the doctors and nurses ignored the signs and symptoms of an imminent rupture.

A brain aneurysm is a weakness in the wall of a cerebral artery or vein causing an area of localized dilation or ballooning. Although there are brain aneurysms are asymptomatic and do not cause any problems, brain aneurysms can grow in size and begin to bleed or rupture. When this occurs, patients begin experiencing symptoms including severe headaches, neck pain, vision loss, imbalance, dizziness, emotional changes, lack of concentration, and other neurological problems. If not treated in a timely manner, a symptomatic brain aneurysm can rupture causing permanent brain injury or death.

What Causes a Brain Aneurysm?

A brain aneurysm occurs when there is a weakness in the wall of a blood vessel in the brain. The repeated trauma of blood flowing against the vessel wall presses against the point of weakness and causes the aneurysm to enlarge. Over time, this pressure creates a blood-filled sac along the wall of the blood vessel. Although aneurysms can occur anywhere in the vasculature of the brain, they most commonly form in the arteries of the circle of Willis. The arteries are inherently weaker and thus are more susceptible to aneurysms.

Who Is at Risk for Developing a Brain Aneurysm? 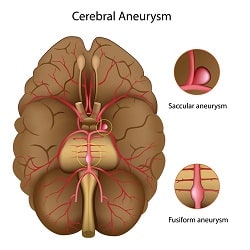 Genetic conditions associated with brain aneurysms include the following:

How is a Brain Aneurysm Diagnosed?

A brain aneurysm is diagnosed based on signs and symptoms, neurologic evaluation, and diagnostic studies.

a. Signs and Symptoms

As stated above, most brain aneurysms are asymptomatic. When a brain aneurysm becomes symptomatic it usually represents an emergent condition and the symptoms are sudden and severe. For instance, it is not uncommon for an individual with a brain aneurysm to present to the emergency room with the “worst headache of their life.” Typically, these individuals have accompanying neurological findings in addition to a headache including but not limited to vision loss, blurry vision, fuzzy vision, floaters, loss of coordination, loss of balance, dizziness, memory loss, emotional changes, depression, difficulty speaking, and lack of concentration.

It is worth noting that not every person with a brain aneurysm has the same symptoms. An individual may have a combination of several symptoms. Typically, a physician will be looking for one or more neurological finding in addition to a sudden and severe headache.

Diagnostic studies represent the gold standard for diagnosing brain aneurysms. Most hospitals and emergency rooms have Magnetic Resonance Imaging (MRI) and Computed Tomography (CT) available. However, the best way of identifying a brain aneurysm is Computed Tomography Angiogram (CTA), Magnetic Resonance Angiogram (MRA), or Cerebral Angiogram. Each of these methods uses radiographs and the injection of a contrast dye to obtain actual imagines of the blood vessels in the brain. This allows the radiologist to obtain a very clear picture of the size and position of the aneurysm.

How is a Brain Aneurysm Treated? 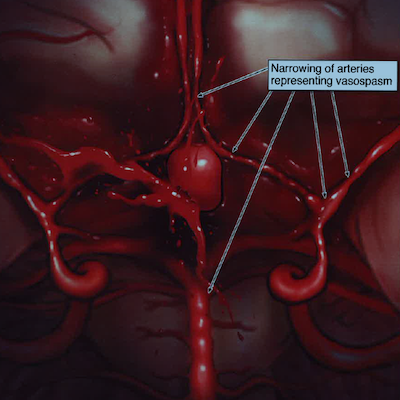 The treatment goal of a brain aneurysm is to exclude the aneurysm from the circulation to eliminate the chance of rupture. How do you do this? The surgeon with either clip the aneurysm or destroy the aneurysm with detachable coils, glue embolization or embolization with autologous grafts

If the aneurysm has not completely ruptured but is symptomatic and/or bleeding, the doctor may be able to treat the aneurysm through surgical clipping or endovascular coiling. In certain circumstances, a gamma knife procedure may also be used; however, this heavily depends upon the size and location of the aneurysm.

Surgical clipping involves placing a metal clip around the base of the aneurysm. This effectively cuts off the blood supply to the aneurysm preventing further growth and rupture.

When Is the Failure to Diagnose a Brain Aneurysm Medical Malpractice?

If you are reading this article, this may be the key question: what type of cases are viable medical negligence claims?

Medical malpractice can occur if the physician fails to recognize the signs and symptoms, fails to conduct a proper physical and neurological examination, fails to refer the patient to a neurologist and/or neurosurgeon, fails to order the correct diagnostic studies, fails to timely diagnose the condition, and/or fails to properly treat the condition.

A brain aneurysm represents a very serious medical condition. Once an aneurysm begins to grow and becomes symptomatic, time is of the essence.

Moreover, the vision loss associated with a migraine is usually a brief aura prior to the beginning of a headache. This is distinguishable from a patient with the sudden onset of a severe headache with no prior history of headaches and persistent vision loss. For these reasons, a competent physician should be able to distinguish between a migraine, a tension headache, and a headache caused by a brain aneurysm.

Below are some sample verdicts in Maryland from around the country in brain aneurysm cases. These verdicts are interesting and illustrative for attorneys trying to get a handle on how a jury might value these claims when they believe the doctor made a mistake.

But the predictive value of these verdicts is limited. It is foolhardy to believe that the outcome of one case is predictive of the result in another even in cases that sound similar. Why? Every case is unique and different and each case presents its own special opportunities and challenges. We provide these because they add to the understanding that lawyer and victims have about the possible settlement range of these types of cases even if you cannot specifically extrapolate the results to your case.

If you think you have a potential wrongful death malpractice claim for someone you loved because a doctor failed to diagnose an aneurysm, call 800-553-8082 or get a free no obligation case evaluation.

More Information on Malpractice Claims
Medical Malpractice
Client Reviews
★★★★★
They quite literally worked as hard as if not harder than the doctors to save our lives. Terry Waldron
★★★★★
Ron helped me find a clear path that ended with my foot healing and a settlement that was much more than I hope for. Aaron Johnson
★★★★★
Hopefully I won't need it again but if I do, I have definitely found my lawyer for life and I would definitely recommend this office to anyone! Bridget Stevens
★★★★★
The last case I referred to them settled for $1.2 million. John Selinger
★★★★★
I am so grateful that I was lucky to pick Miller & Zois. Maggie Lauer
★★★★★
The entire team from the intake Samantha to the lawyer himself (Ron Miller) has been really approachable. Suzette Allen
★★★★★
The case settled and I got a lot more money than I expected. Ron even fought to reduce how much I owed in medical bills so I could get an even larger settlement. Nchedo Idahosa
View More
Submit a Law Firm Client Review