What Is a Category 1 Fetal Heart Tracing?

So a Category 1 strip means things are going well. It is not, however, the time for doctors and nurses to become casual about the risks to the mother or the fetus. It is not unusual for a mom to start with a Category 1 and end up requiring an emergency cesarean section because of a Category 3 fetal heart tracing.

As a result, it is important for nurses and physicians to pay careful attention to the fetal heart tracing and to interpret the fetal heart strip in the context of the mother and fetus’ condition.

What Is a Category 2 Fetal Heart Tracing?

What is the appropriate response to a Category 2 strip? The doctors and nurses must continuously monitor fetal heart rate and contractions via the fetal monitoring strips. They must increase their monitoring and awareness of the monitoring as features of the strip give rise to concern whether oxygen is getting to the fetus.

What Is a Category 3 Fetal Heart Tracing?

There are many different types of Category 3 fetal heart tracing. This page is focused on minimal variability with recurrent variable decelerations.

Why Are Minimal Variability with Recurrent Decelerations a Warning Sign?

Minimal variability is a troubling sign. It indicates that oxygen reserves are being depleted. Similarly, repetitive and persistent late decelerations are a reliable sign of oxygen deprivation.

So from the very first time a doctor or nurse sees minimal variability with recurrent decelerations, it is a bullhorn warning that this child's oxygen reserves will soon be completely spent.

If the doctors and nurses ignore that warning or fail to recognize that periods of minimal variability accompanied by recurrent decelerations are indicative of abnormal fetal acid-base status and hypoxia, the child runs the risk of a serious birth injury or death.

Common causes of variable decelerations include head or cord compression. Head compression usually occurs while pushing during labor and delivery, while cord compression can be from a short cord, nuchal cord wrapped around the fetal neck, body enlargement, prolapsed cord, decreased amniotic fluid, or the forces of labor.

What Is a Variable Deceleration and What Does It Look Like? 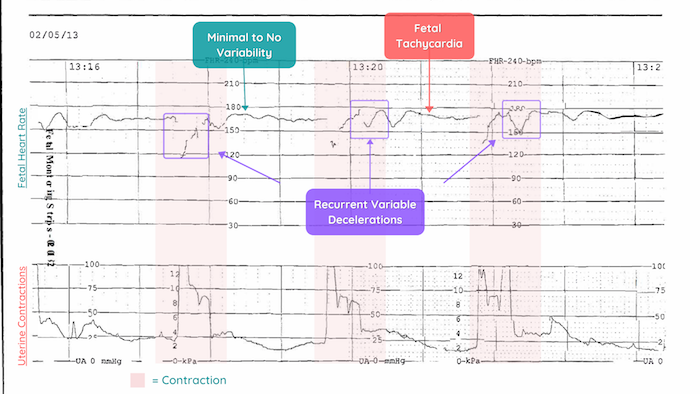 Two things are being recorded in this heart tracing. The upper part of the tracing is the fetus’ heart rate. The lower part is the mother’s uterine contractions. A contraction occurs when you see a spike in the line, once again looking like a mountain (this time right side up).

In addition, this fetal heart strip has minimal to absent beat-to-beat variability.

Unlike the baseline heart rate, the beat-to-beat variability is not looking at the average heart rate over 10 minutes, but how much the heart rate is going up and down between individual beats. Is it a line with a lot of ups and downs, or is it a pretty smooth line? Here, the line is relatively smooth, meaning there is minimal to absent beat to beat variability.

This feature, in addition to the tachycardia and decelerations, makes this a Category 3 fetal heart strip that requires immediate delivery via cesarean section.

The fetus in this tracing also has fetal tachycardia, or an elevated heart rate of 170 -175 beats per minute over a 10 minute period of time. A normal fetal heart rate is 110 - 160 beats per minute. An elevated heart rate by itself does not make this a Category 3 fetal heart tracing. However, the fact that it is present with the decelerations most likely indicates that the fetus’ heart is pumping faster to supply more oxygen to the rest of its’ body. Unfortunately for this patient, the fetus’ conditioned worsened over time as is seen in the below strip. 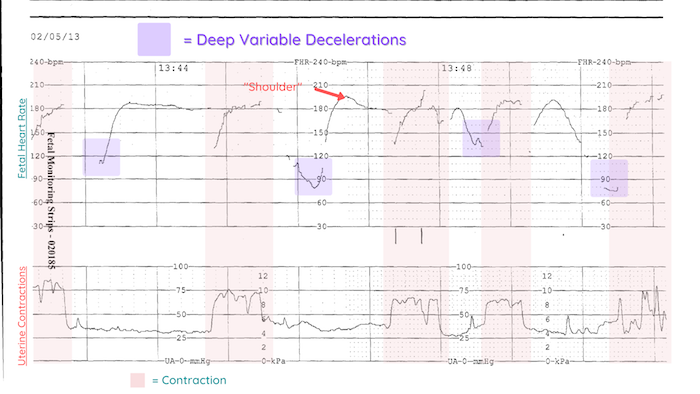 This fetal heart tracing occurred approximately 30 minutes later. This is also a Category 3 fetal heart tracing with the fetus experiencing large, deep variable decelerations. The depth and length of the decelerations are worrisome. To use an analogy, imagine being dunked underwater in a swimming pool, but not have enough time to come up for air between dunks. That is exactly what is happening here. The fetus is being deprived of oxygen with every contraction. The decelerations are lasting so long that the fetus has no opportunity to get oxygen from the mother. As result, the fetus suffers a brain injury and organ damage.

What Is a “Shoulder” in a Fetal Heart Tracing?

Another feature worth discussing here is the presence of something called a “shoulder.” If you look closely, after each variable deceleration the heart rate returns to the baseline and then continues a little higher for approximately 30 seconds or so. This represents the fetus gasping for breath following each deceleration. The fetus is overcompensating with an elevated heart rate when the contraction finally stops. Once again, this is just further evidence that action needs to be immediately taken to deliver this baby.

Ultimately, it is the nurse's and physician’s responsibility to read and interpret fetal heart tracings, not only by interpreting the tracing, but by considering it in the context of the patient’s condition.

In this particular case, the patient was a type 1 diabetic, who was at high risk for complications, including a lack of oxygen being transferred to the fetus during labor. Fetus’ of type 1 diabetic mothers are at high risk for developing depleted oxygen reserves. This a fancy way of saying they cannot last very long if their oxygen supply is reduced during labor and delivery.

Based upon these fetal heart tracings it was clear that this fetus was not tolerating the forces of labor and delivery and suffering injury. This is why an emergency cesarean section was required.