How to Read Recurrent Late Decelerations

Often, birth injury lawsuits involve the failure to identify and respond when the fetus shows recurrent late decelerations on the fetal heart monitor.

The purpose of this page is to help lawyers and parents better understand how to read recurrent late decelerations fetal heart monitor strips and understand their potential significance when evaluating what went wrong during the delivery process.

The fetal heart rate pattern can be a marker of fetal cardiac and central nervous system responses to significant changes in blood gases, blood pressure and acid-base status.

Before we read the tracings, it is important to understand the general categories of strips. For a description of these fetal heart tracing categories, please read our summary on Categories of Fetal Heart Tracings.

What Is a Category 3 Fetal Heart Tracing?

There are many different types of Category 3 fetal heart tracing. This page is focused on minimal variability with recurrent late decelerations (late decels) during labor. 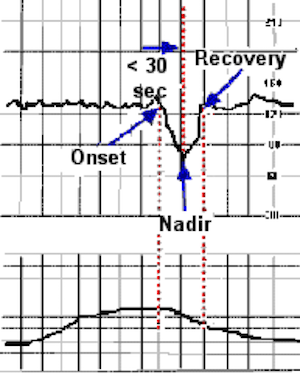 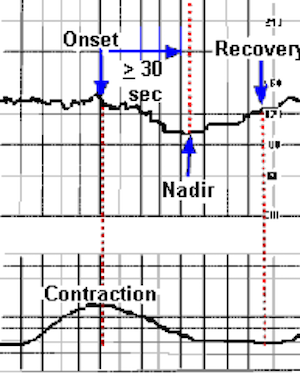 Why Are Late Decelerations Dangerous?

Late decelerations are dangerous because they are evidence of uteroplacental insufficiency. The placenta is the fetus’ lifeline from the mother. Vital blood and oxygen flow from the mother’s uterus to the placental and into the umbilical cord to the fetus.

If there is a disruption in the transfer of blood, nutrients, and oxygen from the uterus to the placenta, the fetus will begin to suffer.

Below is an illustration of the fetal placental circulation. As you can imagine, a disruption of this blood flow could severely injure the fetus. 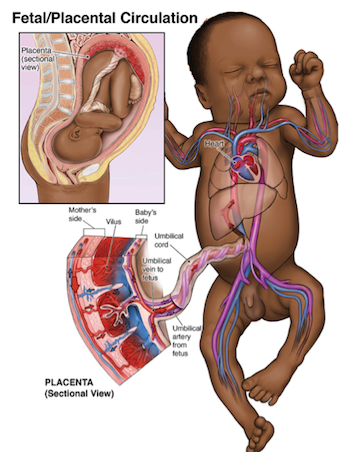 There are many dangerous conditions that can cause late decelerations. A few common ones are as follows:

Whenever late decelerations occur, it is very important for the nurses and physicians to document them in the medical record and to closely follow the patient. If late deceleration begins to occur more frequently, or if they are associated with other fetal heart strip abnormalities, such as minimal variability, the physician may need to perform an emergency cesarean section.

Variable decelerations can be subtle but the key is how the heart rate is trending. The risk of serious injury or death is high when doctors and nurses ignore the warning or fail to recognize that periods of minimal variability accompanied by recurrent late decelerations is indicative of abnormal fetal acid-base status and hypoxia.

What Does A Category 3 Strip With Minimal Variability and Recurrent Late Decelerations Look Like? 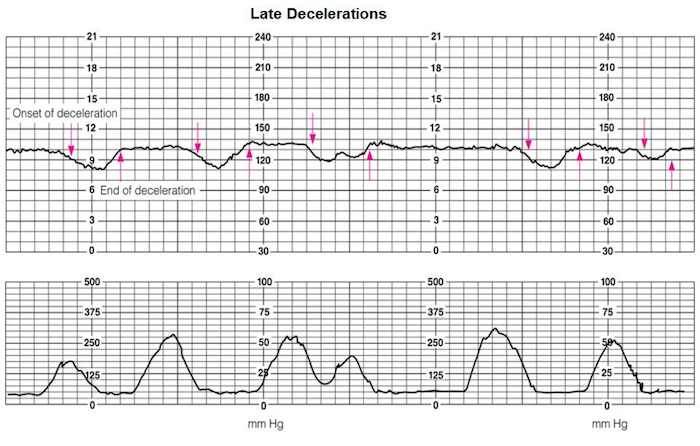 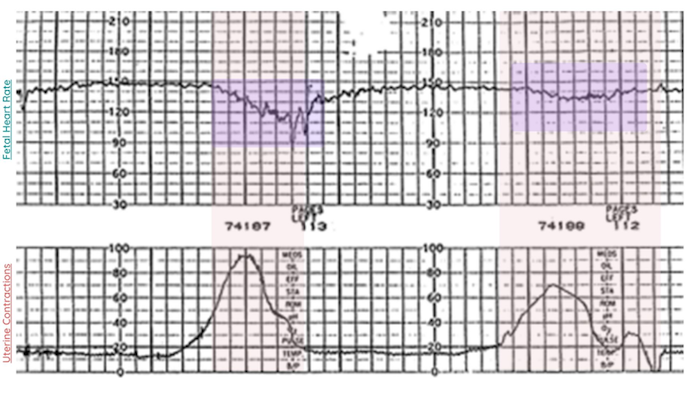 Even if the late decelerations have different depths, they must be considered dangerous. If they are reoccurring, even with moderate variability in between, it is incumbent upon the nurses and physicians to assess the fetus’s condition.

Can Recurrent Late Decelerations Be Corrected?

Sometimes, but it depends. Recurrent late decelerations with moderate variability in between may be caused by excessive uterine contractions or low blood pressure. Sometimes, these conditions can be corrected by reducing the contraction or increasing the blood pressure. This can be done by reducing the Pitocin, providing intravenous fluids, or changing maternal position.

That said, there are some medical conditions, such as diabetes, high blood pressure, and intrauterine growth restriction, where measures to improve the blood flow and oxygen may not be successful. If the lack of oxygen continues, the fetus may develop acidosis and suffer injury.

If the fetus is deprived of enough oxygen, the child might go from having late decelerations to no decelerations or bradycardia (low heart rate below 60 beats per minute). Doctors should not wait until this kind of emergency occurs.

Ultimately, it is the nurses and physicians' responsibility to read and interpret fetal heart tracings, not only by interpreting the tracing but by considering it in the context of the patient’s condition.

Most of the time, these fetal heart strips do not miraculously improve. For this reason, it is also important for a physician to consider the mother’s condition. Category 3 fetal heart tracings often occur with diabetic mothers, high-risk pregnancies, twin pregnancies, growth restriction, or hypertension.

If a patient has one of these conditions, it must be assumed it is the cause of the problem. A patient developing such a pattern in this context may need to be considered for delivery before the tracing becomes any worse. There simply is nothing to be gained by waiting for something bad to happen.

Getting Help from a Birth Injury Lawyer

If you have a birth injury claim and you are not sure if you have a case, or if you are a lawyer looking for help handling your client's birth injury, call us today. You can reach our birth injury lawyers at 800-553-8082 or you can get a free consultation online.