Advanced Radiology is the biggest medical imaging provider in Maryland. It provides x-rays, MRI, MRA, digital mammography, ultrasound, bone density tests, PET, CT/CTA, PET/CT, and nuclear medicine tests. At last count, Advanced Radiology has 32 independent locations, with six of their locations located within a hospital. They have the cache of providing radiological services for the Baltimore Ravens. Advanced Radiology was born small. In 1995, radiology providers merged and, later, two smaller shops joined Advanced to make the mega-radiology provider there is today.

Because we are talking about medical malpractice claims against Advanced Radiology, you are probably expecting a diatribe about how they are a poor health care provider who frequently commits malpractice. However, that is not our contention. We think Advanced Radiology generally does a competent job of treating its patients, taking the images patients need and properly interpreting them. Advanced Radiology is also pretty reasonable, with giving victims a chance to wait for their personal injury settlements, before advancing collection efforts. But like any large-scale health care provider, Advanced Radiology makes mistakes, gets sued, and pays out settlements and jury verdicts to malpractice victims. Radiologists can make errors of perception, knowledge, and judgment and any one of these mistakes can be medical malpractice. 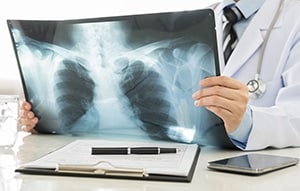 Below are recently filed lawsuits against Advanced Radiology and, where available, the nature of the claims against it.

Below are recent verdicts and publicly reported settlements from medical malpractice cases in which Advanced Radiology was a defendant:

Do You Have a Case?

Diagnostic radiology malpractice claims typically revolve around the patient's medical records and films generated for the patient. If a review of these records leads to the suspicion that a medical mistake has been made, the next step is to find an expert to testify for you that the radiologist deviated from the applicable standard of care required of a prudent radiologist and that the deviation is a cause of harm that was done.

Getting Help from a Lawyer

If you believe you may have a claim against a radiologist for medical malpractice, call us at 800-553-8082 for a free case strategy session or get a free online case review.