There is a concern is the medical community that Viagra may cause melanoma. It may well be that Viagra may have this potentially fatal side effect because of the way the drugs work. Melanoma annually is diagnosed in about 69,000 Americans and causes about 8,650 fatalities.

Lawsuits against Pfizer will argue that the company knew or should have known that these drugs could cause melanoma and should have warned doctors and patients.  So the claim is that Pfizer knew of the significant risks of developing melanoma caused by ingesting Viagra, but Defendant did not adequately and sufficiently warn consumers or the medical community or such risks.  Is this true?  Honestly, we are not sure.

The Association Between Melanoma and Viagra

Viagra is... well you know what Viagra is. It is one of the most well-known and prescribed drugs in human history. A stunning 27 million men have used Viagra, mostly for penile erectile dysfunction ("ED"). It has, of course, made countless billions for Pfizer.

Melanoma is an awful cancer tht is becoming an even bigger public health problem. Over 70,000 invasive cases of melanoma were diagnosed a year with approximately 9000 deaths.  It has nothing to do with the issue of Viagra and melanoma but this point should be repeated as often as possible: early detection is key to beating melanoma.  It is highly curable by surgery if you catch it early. But the good prognosis turns poor if this aggressive cancer is not detected.

There is a real fear now that these blue pills may cause melanoma, an often deadly cancer. A study published in 2011 suggested the possibility that that treatment with Viagra might promote melanoma cell invasion.  Specifically, by inhibiting phosphodiesterase type 5 inhibitor.  It was suggested that Viagra mimics an effect of gene activation which might trigger the development of melanoma cells.

A new study that appears in JAMA Internal Medicine titled "Sildenafil Use and Increased Risk of Incident Melanoma in US Men, A Prospective Cohort Study" reports that the use of Viagra may increase the risk of melanoma or skin cancer by as much as 84%.

This medical study published in the June 2014 volume of the Journal of the American Medical Association (“JAMA study”) found that sildenafil, or Viagra, increases the invasiveness of melanoma cells and raises the risk of melanoma in men who take Viagra. The study examined over 25,000 men between 2000 and 2010 and found that men who took Viagra were twice as likely to develop melanoma as those who did not take Viagra.

This was not some small study. The data that researchers used was of 26,000 men who were tracked since 2000 regarding their sexual health and how often they used Viagra. They also looked at something else: genetic skin cancer and sun exposure. Why is this important? Because it might be that men who take Viagra also happen to be the same sort of men that spend a lot of time in the sun. Alternatively, you also want to make sure there is not a link between erectile dysfunction and melanoma. The key is determining whether this connection between Viagra and melanoma is an association or whether there is direct causation, i.e. Viagra causes melanoma.

Does It Make Sense That Viagra Could Cause Melanoma?

It is easy to see from a scientific perspective how Viagra could cause melanoma. While admittedly the science of melanoma is complex and not fully understood by doctors much less plaintiffs' attorneys. But hyperactivation of a pathway called ERK is found in most patients with melanoma. This pathway is often regulated through a protein called BRAF which inhibits the same protein-coding enzyme as Viagra inhibits.

So the unproven theory is that when Viagra inhibits this enzyme, it could cause melanoma. On some level, it makes sense that the cellular activity providing the mechanism of action for Viagra could also cause the development or exacerbation of melanoma.  But being able to concoct a theory does not mean there is actual causation.

What Are the Take Home Messages from This Study

There are a number of things this study tells us: 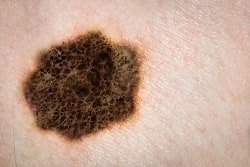 Getting a Lawyer for Your Viagra Melanoma Case
Is our law firm taking Viagra melanoma cases?  We are not.  Why?  There could be a connection.  But there is also evidence to suggest there is no connection.  We just do not know.  But there are lawyers out there who are taking Viagra melanoma claims.
Practice Areas
Client Reviews
★★★★★
They quite literally worked as hard as if not harder than the doctors to save our lives. Terry Waldron
★★★★★
Ron helped me find a clear path that ended with my foot healing and a settlement that was much more than I hope for. Aaron Johnson
★★★★★
Hopefully I won't need it again but if I do, I have definitely found my lawyer for life and I would definitely recommend this office to anyone! Bridget Stevens
★★★★★
The last case I referred to them settled for $1.2 million. John Selinger
★★★★★
I am so grateful that I was lucky to pick Miller & Zois. Maggie Lauer
★★★★★
The entire team from the intake Samantha to the lawyer himself (Ron Miller) has been really approachable. Suzette Allen
★★★★★
The case settled and I got a lot more money than I expected. Ron even fought to reduce how much I owed in medical bills so I could get an even larger settlement. Nchedo Idahosa
View More
Submit a Law Firm Client Review