This page is about Zantac stomach cancer lawsuits. Our lawyers believe in these claims and believe the settlement amounts plaintiff will receive will be high. We believe the stomach cancer Zantac claims are second only to bladder cancer in terms of the strength of the connection between the NDMA and Zantac and the patient developing cancer. If you have a potential Zantac lawsuit, the statute of limitations imposes deadlines to sue. Call us today at 800-553-8082.

January 2023 Update: This page was written before December 2022, when the MDL judge dismissed all the Zantac lawsuits filed or registered in federal court.  So this post will be updated.

Thousands of Zantac cancer lawsuits have been filed around the country since 2018 when quality testing revealed that the popular antacid drug Zantac (ranitidine) contained extremely high levels of NDMA, a chemical known to cause cancer. The Zantac lawsuits have been consolidated into an MDL in Miami and the first round of bellwether test trials are set for January 2023.

The discovery of NDMA in Zantac has prompted the scientific community to conduct extensive research to evaluate any connections between Zantac usage and specific types of cancer. This research has concluded that long-term users of Zantac were at higher risk of developing 5 specific types of cancer involving the gastrointestinal system: (1) bladder cancer, (2) stomach cancer, (3) pancreatic cancer, (4) liver cancer, and (5) esophageal cancer. On this page, we will take a closer look at Zantac lawsuits alleging stomach cancer.

Zantac was first developed by GlaxoSmithKline and brought onto the U.S. market as a prescription drug in the early 1980s. Zantac eventually became available in generic form (ranitidine) and shortly thereafter it was approved as an over-the-counter drug for the treatment of heartburn and similar conditions. By 2017, Zantac and its generic equivalents were generating billions in revenue and used on a daily by 15 million Americans.

After 4 decades on the market, Zantac was believed to be entirely safe. In 2018, however, quality testing by an independent laboratory Valisure found that all ranitidine products contained alarmingly high levels of a chemical called NDMA (N-Nitrosodimethylamine). This chemical has some uses, like making rocket fuel, but it is pure poison for humans. And NDMA is known to cause cancer.

The levels of NDMA found in Zantac were 500 times above the safe daily limit set by the FDA. This was enough to prompt the often slow-moving FDA to get involved. Zantac was promptly pulled off retail shelves across the country. 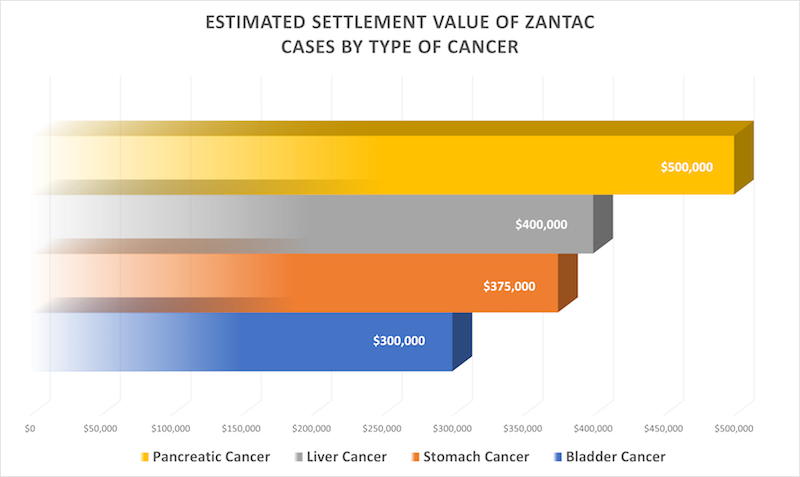 When the Zantac cancer lawsuits first started getting filed, there was no concrete evidence as to what specific cancer types could be scientifically linked to the ingestion of NDMA by Zantac users. There was no meaningful scientific debate that chronic exposure to NDMA could cause cancer. The causal link between NDMA and cancer has been known since the late 1970s and demonstrated in animal testing. The new research and work by experts prompted by the Zantac recall have further advanced our knowledge of the connection between Zantac and specific cancer types.

The current research has identified five specific types of cancer (all related to the gastrointestinal system) that can be reliably linked to NDMA in Zantac. Stomach cancer is one of this group of 5 “Zantac cancers.” The causation evidence supporting a link between Zantac and stomach cancer appears to be very solid. This evidence will show that long-term ranitidine users displayed higher rates of stomach cancer compared to a control group of individuals using other antacid drugs.

Of the 5 “Zantac cancers” described above, stomach cancer (also called “gastric cancer”) seems to have one of the strongest causal links to Zantac use. The most significant outside study linking stomach cancer to Zantac use was published by Gerald McGwin in the journal Cancers in December 2020 and titled: The Association Between Ranitidine Use and Gastrointestinal Cancers (the “McGwin Study”).

The McGwin Study looked at a group of individuals who regularly used Zantac or generic ranitidine for 1 year or longer and compared their cancer rates to a control group of individuals who used other types of antacid drugs. Based on this analysis, the McGwin study found that the rate of stomach cancer was 150% higher among Zantac users compared to the control group. If 150% is not proof, what is?

There are hundreds of Zantac lawsuits currently pending in which the plaintiff is alleging stomach cancer as a result of NDMA exposure from Zantac. One of the bellwether test trials in January 2023 will be a Zantac stomach cancer case.

How Much Will Zantac Stomach Cancer Lawsuits Be Worth?

We have not had any verdicts or settlements in the Zantac cancer litigation, so we don’t know how much Zantac liver cases will be worth. We can still estimate the possible value of Zantac stomach cancer cases by doing a comparative analysis of compensation awards in other tort cases involving cancer. (Is this speculative? Of course it is.)

Using the overall 5-year survival rates as a rough measure, we can say that stomach cancer is about 50% worse than bladder cancer. Based on this comparison, we estimate that Zantac stomach cancer claims will have a settlement value of around $300,000.

This is prediction is an individual settlement amount in a global settlement. A jury award payout would average in the millions for a Zantac stomach cancer lawsuit.

Does Zantac Cause Stomach Cancer?

New research has identified 5 types of cancer that appear to be linked to ingestion of NDMA in Zantac (or generic ranitidine). Stomach cancer is one of these 5 cancer types linked to Zantac. Stomach cancer rates in individuals taking Zantac were 150% higher compared to a control group.

How Much Will Zantac Stomach Cancer Cases Be Worth?

Getting a Lawyer for Your Zantac Stomach Cancer Lawsuit

Our attorneys are reviewing new Zantac stomach cancer lawsuits. If you used Zantac and were diagnosed with cancer and need someone to fight for you, we can give you private and free legal advice and explain your options for seeking compensation for you. Contact our Zantac MDL class action attorneys at 800-553-8082 for a free case review. You may also reach out to us online for a free case evaluation.