This page looks at pancreatic cancer lawsuits that alleged the patient’s cancer was caused by Zantac.  This page has been updated in 2023 to talk about this litigation after just Judge Rosenberg dismissed all claims filed in federal court in December 2022.

Back in 2018, random product quality testing revealed that the widely popular antacid drug Zantac (ranitidine) was actually contaminated with dangerously high levels of a known cancer-causing chemical called NDMA. This surprising discovery was followed by an emergency recall of Zantac and thousands of Zantac cancer lawsuits.

As the medical evidence on the issue of causation has developed in the Zantac litigation, a small group of 5 specific cancer types has been linked to regular Zantac use over a prolonged time period. The cancers that have been linked to Zantac use include (1) bladder cancer, (2) stomach cancer, (3) pancreatic cancer, (4) liver cancer, and (5) esophageal cancer. On this page, we will take a closer look at Zantac lawsuits alleging pancreatic cancer.

Certainly, in 2023, this litigation entered a new phase after the MDL judge rejected and dismissed all plaintiffs who brought a claim.  But there are still viable options outside the MDL Zantac class action for many victims.

About the Zantac Product Liability Lawsuits

Zantac was first developed by GlaxoSmithKline and released on the U.S. market back in the 1980s as a prescription drug for heartburn. By 2017, Zantac was available in various generic forms as both a prescription and over-the-counter drug. An estimated 15 million people in the U.S. used Zantac or generic ranitidine on a regular basis for the treatment of heartburn and related conditions.

After nearly 4 decades on the market and widespread use, Zantac was presumed to be completely safe. In 2018, however, the independent testing laboratory Valisure performed random laboratory quality testing on various antacid drugs which discovered that Zantac contained extremely high levels of a chemical called NDMA (N-Nitrosodimethylamine).

NDMA is a known human carcinogen and the levels of NDMA found in Zantac were 500 times the maximum safe daily limit set by the FDA. The FDA conducted its own testing of Zantac which confirmed the presence of NDMA. This immediately prompted a public safety announcement followed by sweeping recalls. Almost overnight Zantac and generic ranitidine products disappeared from shelves. 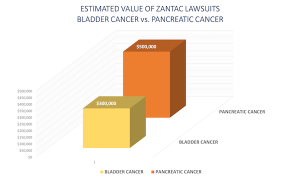 The Zantac recall quickly prompted a wave of product liability lawsuits by individuals who took Zantac on a regular basis and were diagnosed with cancer. Over 70,000 Zantac lawsuits have been filed and consolidated into a Zantac MDL in the Southern District of Florida.

At the start of the Zantac litigation, it was not entirely clear what types of cancer might be caused by prolonged ingestion of NDMA in Zantac. It was very well established, however, that chronic exposure to NDMA caused cancer. The Zantac recall and subsequent litigation prompted further research and studies by experts on the connection between Zantac and specific cancer types.

The research prompted by the Zantac recall has identified 5 different types of cancer that can be linked to NDMA in Zantac with solid evidence. Pancreatic cancer is one of this group of 5 cancers. Based on expert witness reports and studies there appears to be very strong evidence of causation between extended Zantac use and pancreatic cancer. This evidence will show that individuals who used Zantac or generic ranitidine on a regular basis for a prolonged period of time (at least 1 year) displayed higher rates of bladder cancer compared to the general population.

Thousands of Zantac cancer lawsuits have been filed since the 2018 recall. The Zantac lawsuits have alleged a variety of different cancer types. The 4 types of cancer most often seen in Zantac product liability lawsuits have been: (1) prostate cancer, (2) breast cancer, (3) colon cancer, and (4) bladder cancer. As causation evidence from expert reports in the Zantac litigation continued to advance, however, it became clear that certain cancers did not appear to have a strong link to NDMA in Zantac.

In recognition of this lack of causation evidence on certain cancer types, the plaintiffs’ steering committee in the Zantac MDL advised that they did not intend to litigate Zantac cases involving prostate, breast, colon, kidney, and lung cancer. The Zantac litigation will now focus on cases involving bladder cancer, stomach cancer, pancreatic cancer, esophageal cancer, and liver cancer.

How Much Will Zantac Pancreatic Cancer Lawsuits Be Worth?

[Update: This settlement payout information was written before the MDL judge dismissed all of the claims in the Zantac class action pending in federal court in Florida.  So these estimates are really contingent on the appellate court overturning that ruling.  That said, for new claims that were not in the MDL that are filed in state court, those pancreatic cancer claims still may have real value.  But, realistically, there is a chilling effect… so these numbers are no longer accurate even for the Zantac claims that survive in state court.]

None of the Zantac cancer lawsuits have been settled or gone to trial yet so we don’t know for certain exactly how much Zantac pancreatic cases might be worth. We can make a reasonable valuation estimate, however, based on comparative analysis of compensation awards in other tort cases involving cancer.

Finding prior comparable cases for pancreatic cancer is somewhat difficult simply because you don’t see pancreatic cancer involved in many medical malpractice cases. The reason for this is that most cancer malpractice cases are based on a delay in diagnosis resulting in less favorable treatment options and outcomes. For example, a 1 or 2-year delay in diagnosis of breast cancer may reduce life expectancy by 40% and require much more invasive treatment.

With pancreatic cancer, however, delay in diagnosis may not have the same results because the survival rates are very low to begin with. As a result, there are very few misdiagnosis malpractice verdicts or settlements involving pancreatic cancer cases. The best we can do is come up with an estimated valuation based on average settlements and verdicts for other types of cancer.

Does Zantac Cause Pancreatic Cancer?

Studies have identified 5 types of cancer that appear to be linked to ingestion of NDMA in Zantac (or generic ranitidine). Pancreatic cancer is one of these 5 cancer types linked to Zantac. Individuals taking Zantac were 2.6 times more likely to develop pancreatic cancer compared to a control group.

How Much Will Zantac Pancreatic Cancer Cases Be Worth?

We estimate that the potential settlement value of Zantac lawsuits involving pancreatic cancer will be around $500,000.

Contact Our Law Firm with Your Zantac Pancreatic Cancer Lawsuit

Our law firm regularly evaluating new Zantac pancreatic cancer lawsuits. Let our lawyers explain to you all your potential options for compensation. Contact our Zantac class action lawsuit attorneys at 800-553-8082 or get a free online for a free case review.