This page is about Zantac liver cancer lawsuits. Liver cancer is one of just five types of cancer to survive in the Zantac MDL class action lawsuit. lawsuits. Our lawyers’ take on the Zantac lawsuit is that proving the defendants were negligent will be the easiest part of a trial. The harder part is marshaling the scientific evidence to convince the judge your case has the merit to get to a jury.

If you have a potential Zantac lawsuit, there are deadlines to sue imposed by the statute of limitations. Call us today at 800-553-8082 for a free case evaluation.

[Note: A lot has happened since this page was originally written.  In December 2022, the MDL class action judge dismissed every Zantac lawsuit in federal court.  It does not mean these cases are over.  But, now, much of this page is outdated.]

In 2018, product quality testing revealed that the popular antacid drug Zantac (ranitidine) contained extremely high levels of a chemical called NDMA, a known human carcinogen. This alarming discovery provoked a nationwide recall of Zantac followed by a wave of Zantac cancer lawsuits. The Zantac lawsuits have been combined into an MDL and the opening round of bellwether trials are set for January 2023.

Since the discovery of NDMA in Zantac and subsequent recall, the scientific community has done extensive research on the causal link between Zantac usage and specific types of cancer. These efforts have developed solid evidence to show that long-term use of Zantac can be linked to a small handful of cancer types, all of which involve the gastrointestinal system: (1) bladder cancer, (2) stomach cancer, (3) pancreatic cancer, (4) liver cancer, and (5) esophageal cancer. On this page, we will take a closer look at Zantac lawsuits alleging liver cancer.

About the Zantac Recall and Lawsuits

Zantac was developed by GlaxoSmithKline and originally released on the U.S. market as a prescription drug in the 1980s. Over the years, Zantac became available in generic form (ranitidine), and eventually, it was approved as an over-the-counter drug for the treatment of heartburn.

Around 15 million people in the U.S. were believed to be using Zantac or a generic equivalent daily in 2017. At that point, Zantac had been around for decades and was assumed to be completely safe. This changed drastically in 2018, however, when an independent consumer laboratory performed quality testing on Zantac and found that it contained very high levels of a chemical called NDMA (N-Nitrosodimethylamine).

NDMA is a toxic chemical that is known to cause cancer. The levels of NDMA found in Zantac were 500 times more than the maximum safe limit for daily exposure set by the FDA. This was enough to prompt the FDA to get involved and Zantac was promptly pulled off retail shelves across the country. The Zantac recall sparked an onslaught of Zantac product liability lawsuits by individuals alleging that their regular use of Zantac caused them to develop cancer. There are currently over 80,000 Zantac lawsuits and/or registered claims pending in the Zantac MDL. 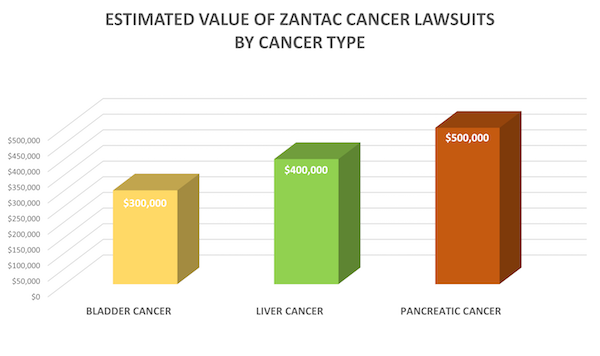 When the Zantac litigation first started, there was no definitive evidence on what specific types of cancer might be caused by prolonged ingestion of NDMA in Zantac. It was widely recognized, however, that chronic exposure to NDMA could cause cancer. The Zantac recall and subsequent litigation led to new research and studies by experts on the connection between Zantac and specific cancer types.

The research motivated by the Zantac recall has pinpointed 5 specific types of cancer (all related to the gastrointestinal system) that can be linked to NDMA in Zantac with reliable evidence. Liver cancer is one of this group of 5 “Zantac cancers.” Based on expert witness opinions and clinical studies, there seems to be very strong causation evidence supporting a link between Zantac and liver cancer. This evidence will show that individuals who used ranitidine regularly for an extended period (at least 1 year) displayed higher rates of liver cancer compared to a control group of individuals using other antacid drugs.

Of the 5 “Zantac cancers” listed above, liver cancer seems to have the most equivocal evidence of causation appears to be the strongest for liver cancer. The primary evidence for linking liver cancer to Zantac use comes from the December 2020 study by Gerald McGwin published in the journal Cancers and titled: The Association Between Ranitidine Use and Gastrointestinal Cancers (the “McGwin Study”).

The McGwin study found that individuals who used Zantac regularly displayed a higher rate of liver cancer compared to those using other antacid drugs. The McGwin study noted that the link between liver cancer and Zantac was “not surprising” because “the liver plays a prominent role in the metabolism of [NDMA]” and animal testing has linked liver cancer to NDMA. However, the McGwin study also pointed out that “with one exception, prior studies have failed to document a significant association between NDMA exposure or ranitidine use and liver cancer.”

There are hundreds of Zantac lawsuits currently pending in which the plaintiff is alleging liver cancer as a result of NDMA exposure from Zantac. At least one of the opening round bellwether trials will feature a liver cancer claimant.

How Much Will Zantac Liver Cancer Lawsuits Be Worth?

There have not been any verdicts or settlements in the Zantac cancer litigation, so we cannot say for certain exactly how much Zantac liver cases might be worth. However, a comparative analysis of compensation awards in other tort cases involving cancer can give us a reasonable valuation estimate.

Our estimated value for Zantac bladder cancer lawsuits is around $300,000. This is a fairly reliable estimate because it is based on a prior mass tort product liability settlement involving a prescription drug that allegedly caused bladder cancer. Our value estimate for Zantac cases involving pancreatic cancer is $500,000, which is based on a comparison of the survival rates between pancreatic and bladder cancer. Hopefully, this underscores the rough and speculative nature of these predictions.

Applying the same comparative analysis here, our lawyers predict Zantac liver cancer cases will have a possible settlement value of around $300,000. The overall 5-year survival rate for liver cancer is only 20%, which makes it much “worse” than bladder cancer but not quite as bad as pancreatic cancer. For this reason, liver cancer Zantac cases should have a settlement value somewhere in between.

Keeping in mind we are talking settlement amounts in the context of a global settlement. The average jury compensation award payout for a lawsuit that connected a victim’s liver cancer and NDMA would likely be in the millions.

Does Zantac Cause Liver Cancer?

We have identified five types of cancer we believe have scientific evidence that strongly links ingestion of NDMA in Zantac (or generic ranitidine). Liver cancer is one of these five cancer types linked to Zantac. Of the five, our lawyers would probably rank liver cancer in the middle in terms of the strength of the case. Individuals taking Zantac almost three times more likely to develop liver cancer compared to a control group. That is extremely strong evidence and it should be enough to get liver cancer patients to get by Daubert and get to a jury.

How Much Are Projected Zantac Liver Cancer Settlements?

Our lawyers estimate that the average individual settlement amounts of Zantac lawsuits involving liver cancer will be between $250,000-$350,000, which is based on a comparison to settlements in similar mass torts involving other cancer types. Again, this assumes these cases make it to the jury on scientific weight. You also have to keep in mind how soft and fluid settlement payout projections are.

Hiring a Lawyer for Your Zantac Liver Cancer Lawsuit

Our lawyers are evaluating potential Zantac stomach cancer lawsuits every day. If you used Zantac and were diagnosed with cancer and need someone in your corner, our law firm will give you private and free legal advice and explore with you options for seeking compensation payout for the harm that was done to you. Contact our Zantac MDL class action attorneys at 800-553-8082 for a free case review. You may also reach out to us online for a free case evaluation.