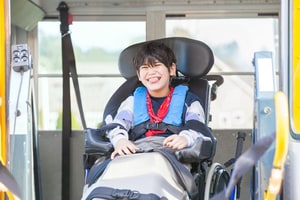 Hemiplegic cerebral palsy is a subtype of spastic cerebral palsy. Cerebral Palsy is a general term that refers to the abnormalities of motor control or movement of the body caused by an injury to a child's brain.

More generally, there are 3 primary types of cerebral palsy: spastic, dyskinetic, and ataxic. Spastic CP is the predominant type accounting for 75% of all cerebral palsy cases. Spastic CP tends to affect specific areas or zones of the child's body (upper, lower, left/right) so cases of spastic CP are usually further categorized into subtypes based on what zone is impacted. Again, hemiplegic cerebral palsy is specific subtype of spastic CP in which one particular side of the body (left or right) is affected.

What Are the Causes of Hemiplegic Cerebral Palsy?

Like all cerebral palsy, hemiplegic cerebral palsy is caused by brain damage gestation, childbirth or early neonatal care. The damage to the brain is usually the result of oxygen deprivation which causes cells in the brain to decay and die. As a result the brain's ability to control and coordinate the movement of certain muscles in the body is permanent impaired.

The specific mechanism of the oxygen deprivation varies from case to case but common causes can include maternal or placental infection, asphyxia during birth, premature birth congenital heart disease, infant stroke, and/or mother and infant blood incompatibility.

The damage that causes hemiplegic cerebral palsy is often periventricular white matter damage that is predominant on one side.

What Are the Symptoms of Hemiplegic Cerebral Palsy?

Note that symptoms appear and vary differently depending on the child. The one common hallmark of all hemiplegic CP symptoms is that they occur on one particular side of the child's body. Some common symptoms of hemiplegic CP include:

What Are the Risk and Complications of Hemiplegic Cerebral Palsy?

How Does Hemiplegic Cerebral Palsy Develop?

Hemiplegic cerebral palsy is not a progressive condition. The initial injury will not get worse with age. As a child ages and experiences growth spurts, they may be more exposed to the effects of muscle spasticity. However, this does not indicate that the condition has gotten worse.

Furthermore, children will present some atrophy of the hand, arm, shoulder, leg, and foot. As the child gets older this may appear more noticeable. The child's arms or legs on the affected side often appear shorter than the other side. This difference could be due to increased muscle tone pulling the limb upward or a true difference in the length of the bone. In such cases, weight bearing and strengthening exercise and therapy can help prevent atrophy.

Most children with hemiplegic cerebral palsy do quite well. Most walk independently.

What Is the Treatment for Hemiplegic Cerebral Palsy?

There is no "cure" for hemiplegic cerebral palsy. However, therapies and medication can help alleviate some of the symptoms. For example, a physician may prescribe different medications to prevent or symptoms. Additionally, orthotics, splints, and braces may help with spasticity and walking. 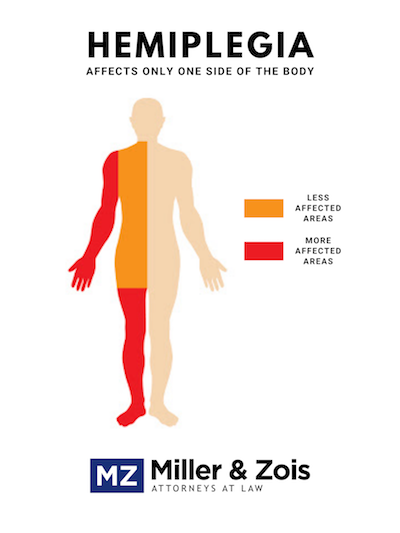 Hemiplegic cerebral palsy (and all types of CP) is frequently the result of medical malpractice or negligent care during pregnancy or childbirth. Health care providers may fail to recognize and treat pregnancy complications, which can cause birth injuries such as hemiplegic cerebral palsy. They can also perform procedures that may put the baby at risk such as using forceps and vacuum extractors. The most common type of medical error linked to cerebral palsy is failure to timely respond to signs of fetal distress during labor and delivery.

If you have a child diagnosed with hemiplegic cerebral palsy there is a strong likelihood that it might be the result of medical negligence. The birth injury lawyers at Miller & Zois can help investigate your case and determine whether you have a claim for malprac