One of the most common misperceptions about cerebral palsy is that CP is one single, uniform disability with the same basic symptoms and characteristics in all cases (like autism or down syndrome). This is actually not the case at all. Cerebral palsy is actually a medical umbrella term used to identify several distinct but related neurologic muscle movement disorders. The cluster of movement disorders that are classified as cerebral palsy really only have one thing in common. They are all the result of cellular damage to the brain while it is still in its earliest developmental phase prior to birth. The neurologic damage typically results from oxygen deprivation during childbirth but it can also occur earlier in gestation. The injury leaves key parts of the brain permanently impaired and not able to exercise normal control over certain muscles in the body.

The several different systems for classifying the different types of cerebral palsy, but the most authoritative and widely accepted system is the so-called European Classification system. Under the European system there are 4 recognized subtypes of cerebral palsy: (1) spastic; (2) dyskinetic; (3) ataxic; and (4) mixed. An individual CP case is classified into one of these 4 subtypes based on the primary type and location of the individual's movement impairment. Below is a brief overview of each cerebral palsy subtype. 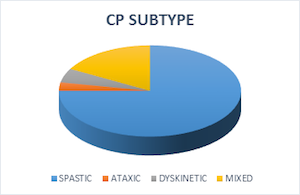 The main feature of spastic cerebral palsy is disabling stiffness and rigidity in the muscles of the affected part of the body. Movements of the body are accomplished by engaging certain muscles while simultaneously relaxing opposing muscles. Individuals with spastic cerebral palsy are unable to relax certain muscles in their body because of scrambled signals from the brain. As a result the muscles freeze up when movements are attempted and muscle tone remain tense and rigid when not moving. Another unique aspect of spastic CP is that it tends to affect specific areas of the body. This has led to the development of further classification of spastic CP cases based on the area of the body that is affected by spasticity:

Dyskinetic cerebral palsy accounts for between 5-10% of all CP cases worldwide which ranks it as the second most common CP subtype behind spastic CP. Dyskinetic cerebral palsy causes highly variable involuntary muscle movements which become particularly acute when the person attempts to move. The dyskinetic subtype of CP has been specifically linked to damage to the basal ganglia area of the brain which acts like the control panel for coordination of body movements. The involuntary movements that afflict people with dyskinetic CP comes in 3 distinct forms:

The involuntary movements of dyskinetic CP affect variable parts of the body and sometimes may jump from one muscle group to another (particularly with chorea). The symptoms of dyskinetic CP are often further complicated by muscle spasticity similar to that experienced by individuals with spastic CP.

The rarest cerebral palsy subtype is ataxic CP. According to most estimates, fewer than 5% of cerebral palsy cases are ultimately classified as ataxic CP. Ataxic CP is caused by the inability of the brain to control functions such as depth perception, balance and fine motor coordination. Individuals with cerebral palsy subtype appear wobbly, shaky, unbalanced and severely uncoordinated. Executing fine motor task such as writing or buttoning a shirt may be impossible with ataxic CP because the individual's brain is simple not able to direct these sort of functions. The symptoms of ataxia can afflict any area of the body including the face which can lead to difficulties with speech and eating. Ataxic CP is the least treatable type of cerebral palsy.

Mixed CP is a subtype for cerebral palsy cases that exhibit features of more than one of the 3 primary subtypes (spastic, dyskinetic, ataxic). Most cerebral palsy cases classified as mixed are a combination of 2 primary subtypes with spastic and dyskinetic CP being the most common pairing. Other mixed combinations are possible but not commonly seen.

Getting a Cerebral Palsy Lawyer for your Child

One of the things that makes cerebral palsy a unique disorder is that it is strongly linked with medical negligence during childbirth. A high percentage of cerebral palsy cases are the result of temporary oxygen deprivation during childbirth which is frequently attributable to poor judgement and negligent medical care in the labor and delivery room. If your child has cerebral palsy you may be able to get financial assistance for their care by bringing a medical malpractice claim. The birth injury attorneys at Miller & Zois can help you investigate your case and figure out whether your child's cerebral palsy was the result of medical error. You can call Miller & Zois at 800-553-8082. Free claim evaluations are also available online to answer any questions you may have.