The Atrium C-Qur hernia mesh lawsuits involve allegations that the surgical mesh implant has caused pain and even death in patients. Our lawyers believe the C-Qur lawsuits may be getting ripe for a global settlement.

Frustrated hernia mesh victims have been understandably frustrated at the false starts toward settlement in recent years. But this upcoming trial could be the catalyst for a class action settlement for most victims who have brought Atrium C-Qur hernia mesh lawsuits. 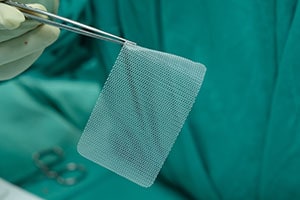 After COVID and other delays, District Judge Landya B. McCafferty of the U.S. District Court for New Hampshire has scheduled the first bellwether trial in the MDL involving Atrium’s C-Qur hernia mesh product.

Judge McCafferty set the first trial to begin on July, 7, 2021. But Atrium and Maquet Cardiovascular thought better of taking a verdict and agreed on a settlement compensation payout.

Why didn’t the case go to trial? Our hernia mesh lawyers can only speculate that the defendants wanted to avoid a verdict. This is not uncommon. Our attorneys think settlement is growing closer and a big verdict might upset the apple cart and lead to higher expectations from mesh victims.

The next case, Luna, does not yet have a trial date. Again, these cases could settle soon. If you have a claim, call us, call another lawyer. But do it quickly. The statute of limitations can be a thorny issue in hernia mesh lawsuits.

On October 19, 2021, after a six-day trial, a federal court jury in Illinois issued a defense verdict in an Atrium hernia mesh lawsuit. The jury found that Atrium was not liable for the plaintiff’s infection following hernia surgery.

This case was not part of the Atrium MDL because it involved Atrium’s ProLite mesh product. The claims in the Atrium Hernia Mesh MDL involve its C-Qur mesh products which utilize a problematic fish oil coating. So, sure, Atrium gets a win but it is not relevant to future settlement amounts in the Atrium C-Qur lawsuits.

The first lawsuits against Atrium were filed in August 2016. Hundreds more soon followed and the C-Qur cases in Federal Court were soon consolidated into an MDL in the U.S. District Court for New Hampshire around December of that year. Judge McCafferty was assigned to oversee the C-Qur MDL.

Surgical mesh devices must be harmless to living tissue and benign inside the body to prevent the body’s immune system from rejecting it. Mesh devices are divided into absorbable and permanent mesh devices.

Absorbable devices are made of animal tissue and absorb into the body once implanted. They are not meant to be permanent and become less sturdy long-term. Absorbable devices only provide temporary reinforcement.

Atrium’s C-Qur is a non-absorbable hernia mesh made out of polypropylene. It is coated with a layer of Omega-3 fatty acid, which is made of fish oil. The coating is meant to prevent tissue from attaching to the mesh. Doctors can also trim the C-Qur mesh before implanting it to customize it to a particular patient.

The C-Qur mesh utilizes a blend of Omega 3 Fatty Acid Fish Oil (“O3FA”) to form a barrier coating on the product. As the name would suggest, this compound comes from fish. Fish derivatives are known to often be allergenic and immunogenic.

The extraction process is critical. If fish remnants are left in the O3FA coating, that can cause a significant immune response. Plaintiffs’ lawsuits have alleged that the complications can include severe pain, organ damage, graft rejection, graft migration, fistula, complex seroma, sinus tract formation, delayed wound closure, infection, sepsis, and death

The C-Qur Hernia mesh was cleared by the FDA around March 2016. Atrium utilized the FDA’s 510(k) clearance program, which allows companies to bypass normal research and study requirements on the product if it is similar to existing ones already on the market.

C-Qur qualified for this fast-track approval proves because it was comparable to similar hernia mesh products that were approved in the 1990s.

However, the Omega-3 fatty acid coating made the C-Qur mesh distinct from all other hernia mesh products. This coating ended up being a disaster. It was cytotoxic, immunogenic, and not biocompatible. The result? This coating caused or contributed to serious complications, including infection, delayed wound healing, inflammation, foreign body rejection, infection, and other complications that caused a lot of people to suffer.

Despite the FDA’s clearance of the C-Qur mesh, the product has resulted in numerous health complications in certain patients who had the mesh surgically implanted in their bodies.

What happened? The device makers sold the material in the C-Qur as inert. Now, there is a substantial body of scientific evidence support suggesting that this mesh material is biologically incompatible as used does not work as it should.

This material seems to promote an immune response in a large subset of the patients using C-Cur. This immune response further promotes the degradation of the polypropylene mesh and the patient’s surrounding tissue. The result can be severe adverse reactions to the mesh.

Plaintiffs’ attorneys claim in numerous C-Qur hernia mesh lawsuits that the result is severe inflammation, gastric ulcers, and organ perforation. The C-Qur mesh product also became stuck to the bowel and other organs in some patients requiring extensive surgical repair. The source of these problems with C-Qur was the unique omega-3 coating around the plastic mesh.

Unfortunately, the omega-3 fatty acid coating was defective and demonstrated a tendency to degrade very quickly and separate from the plastic mesh once implanted. Without the coating, the plastic mesh became non-compatible inside the body. This caused the host of health complications described above. In certain patients degradation of the coating triggered severe allergic reactions that were sometimes life-threatening.

Atrium’s Issues With the FDA

The FDA started taking action about the problems with the C-Qur hernia mesh several years ago. In October 2012, an initial warning letter was issued by the FDA to Atrium.

The FDA noted that Atrium did not properly sterilize C-Qur products, which could result in infections in those who have the implant.

The FDA warning also noted that human hair had been found in the mesh coating in several instances. The FDA suggested that the problems with the C-Qur coating may be related to temperature change during the manufacturing process causing deterioration of the coating on the plastic mesh.

In the summer of 2013, the FDA issued a Class II recall on thousands of Atrium’s C-Qur mesh devices that were defectively manufactured causing the coating to stick to the packaging when exposed to high humidity for a lengthy period. Atrium responded to the recall by warning providers of the risks of storing the hernia mesh in high-humidity areas.

Finally in February 2015, the U.S. Department of Justice, on behalf of the FDA, filed a lawsuit against Atrium in the District Court of New Hampshire. The suit alleged that Atrium knowingly introduced an inferior medical device into the market.

Days later, a permanent injunction was issued by the FDA, which temporarily stopped the distribution and manufacture of the C-Qur hernia mesh at the Atrium facility in Hudson, New Hampshire.

Importantly, plaintiffs’ lawsuits alleged that when concern was raised about problems with C-Cur, not only did the device maker keep this from the FDA but it also misled doctors about the fact that O3FA might cause allergic reactions in patients who receive the C-Qur Mesh. This is a serious claim and pre-trial discovery in these C-Qur lawsuits will flush out this issue.

Atrium Sale Should Push These Lawsuits Towards Settlement

Atrium sold its bio-surgical business to Hong Kong’s HJ Capital 1 a few years ago. But, as a condition of the sale, Atrium kept the liability C-Qur lawsuits.

Why does this matter? Companies often offer more reasonable settlement amounts when they are no longer emotionally invested in the product and the employees who made the key decisions. If Atrium is close to offering reasonable settlement compensation payouts, as our lawyers suspect, this may be one fact that greases the wheels of a successful resolution of these lawsuits.

Following the FDA recall and injunction hundreds of C-Qur mesh lawsuits starting getting filed against Atrim across the country. The C-Qur lawsuits pending in federal courts were soon consolidated into a multidistrict litigation (MDL) in New Hampshire in December 2016.

The hernia mesh lawsuits allege that the C-Qur products were unsafe and were introduced to market without proper testing. The suits bring several types of product liability claims against Atrium including failure to warn, defective design, and defective manufacture. The first bellwether trial in the C-Qur MDL was set to begin in July 2021. But that case reached a settlement.

The next trial, Luna, does not have a trial date. The last MDL status conference was cancelled. The presumption is an Atrium C-Qur mesh lawsuit settlement is on deck. We will wait to see if the lawsuits settle.

Have You Been Injured by the C-Qur Hernia Mesh?

If you have a C-Qur surgical mesh implant and you have been experiencing health complications you can start by reporting your case to the FDA. Reporting them may increase the chances that the courts might hold Atrium liable for complications resulting from these C-Qur implants.

You should also contact your physician or other medical provider. They will give you advice on how to proceed forward in dealing with complications you may have from C-Qur mesh implants.

It is not too late to file your own suit against Atrium for injuries caused by the C-Qur surgical mesh implant. Our law firm is accepting new C-Qur cases. If you have a C-Qur mesh injury please call us at 800-553-8082 or get a free consultation online.