Exactech is a major joint replacement implant company that manufacturers an extensive line of artificial hip implant systems including the Novation Crown Cup. In 2021, Exactech issued a significant recall of the Connexion GXL plastic liner used in many of the company’s Novation Crown Cup hip replacement implant systems. This recall has prompted a number of product liability lawsuits against Exactech for premature failure of its hip implants. The Novation Crown Cup has a spherical cup shaped piece which is designed to function like the hip joint socket. The Connexion GXL liner is Exactech’s specially designed insert made from polyethylene plastic that fits inside the cup sockets to absorb friction from the moving joint.  After the Connexion GXL liners and Novation were released in 2007, Exactech began receiving reports of the Connexion liners wearing out very rapidly leading to high early failure rates for the Novation hip implants. Several prominent medical journals eventually published case studies highlighting the high rate of premature failures with the Connexion liners.

In June 2021, Exactech launched a Class II recall for the Connexion polyethylene liner components. After the recall, an internal investigation by Exactech determined that the cause of the problem with the hip implants was a defect in the vacuum seal packaging that the Connexion GXL liners are shipped in. This defect in packaging was causing the plastic liners to degrade before being implanted, eventually causing the premature failures.  Individuals who had an Exactech hip replacement implant with a Connexion GXL liner surgically implanted may be able to bring a product liability lawsuit against Exactech if the hip replacement fails prematurely.

A recent report from the National Joint Registry in Great Britain found that nearly 14% of patients who received a metal-on-metal replacement required revision (removal or replacement of joint) within 7 years. This is compared to only a 3% revision in patients who received a joint made of plastic during the same follow-up time. The Registry includes approximately 1 million people who had replacements of the hip, knee or ankle. This registry is the world's largest joint database. The FDA has stated that some of the devices on the market in the UK are not available in the US, thus the data presented by the National Joint Registry may not be directly applicable to the U.S. But you get the idea. 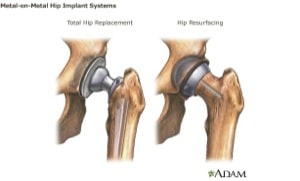 DePuy, a division of Johnson & Johnson, voluntarily recalled a specific type of metal hip replacement, the ASR™ XL Acetabular System. The recall was prompted by a report from the National Joint Registry of England and Wales which found that 13% of patients receiving this specific device required revision within 5 years.

The emerging concerns with metal-on-metal replacement include release of metal debris locally and into the blood and urine, wear-related complications including allergic and inflammatory reactions, pain, formation of pseudotumors, metalosis (build up of metal debris in soft tissue), bone loss and soft tissue necrosis. Soft tissue necrosis can be debilitating and cause loss of mobility due to muscular tissue death.

Studies have demonstrated that the rate of failure has a correlation to weight with a higher number of patients being overweight or obese needing replacements. Another factor in rate failures appears to be gender. In a single-site study, 1212 subjects were followed over 24 to 178 months. Average time to failure was approximately 4 years and was due to loosening or metal complications. In this study, researchers found that there was a higher rate of failure in women compared to men. It is also noteworthy that literature has shown women tend to have a higher incidence of adverse effects related to soft tissue reactions than men. Other risk factors for failure include patients with bilateral implants, increased activity levels and patients with small femoral heads.

As the U.S. does not have a national joint replacement registry, 145 orders were issued to 21 manufacturers for post-market surveillance studies on May 6, 2011. The orders required the manufacturers to submit a research protocol to address safety issues of the devices. The FDA has issued a statement that they are currently reviewing metal-on-metal hip systems with respect to risk-benefit profiles, patient selection criteria, pre-operative patient counseling, surgical technique, follow-up and revision rates. The FDA has indicated that they will post any findings as they become available.

What to Do If You Have a Defective Hip Replacement

Further information on metal-on-metal hip replacement devices can be found on the FDA website. If you are considering a claim and want more information about whether you qualify, call our attorneys at 800-553-8082.