Our lawyers are handling Exactech recall lawsuits in all 50 states.  Exactech has recalled thousands of knee, hip, and ankle implants.  Most patients calling our Exactech lawyers have received a letter from their docgtor about the recall and want to bring a claim because they have gotten or will soon need revision surgery.
Medical device company Exactech recently announced a major recall of all its knee (and ankle and hip) replacement implant systems made after 2004 after discovering that defective packing was causing a polyethylene insert component to degrade. This packaging defect caused many Exactech knee implants to prematurely fail, forcing many patients to undergo unnecessary corrective surgery.
Knee surgery patients who had an Exactech knee implant that failed and need revision surgery may be entitled to bring a lawsuit and seek financial compensation for their pain and medical expenses. Because the pain and suffering and other harms victims will endure were the cause of an unnecessarily defective product.
Our law firm is currently accepting Exactech knee and ankle implant failure cases from victims who had a recalled Exactech implant system (knee or ankle) that subsequently failed resulted in, or will lead to, revision surgery.  Do not sleep on your rights. Call our lawyers at 800-553-8082. You pay no fee or cost unless you get financial compensation for the harm done to you. 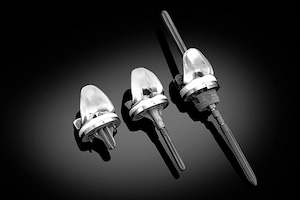 Exactech is a global medical device company headquartered in Gainsville, Florida. Since it was founded in 1985, Exactech has specialized in surgical implant systems for use in joint replacement surgeries.

These are the recalled Exactech products:

What Should Patients with Recalled Exactech Implants Do?

Exactech has sent out a letter to all patients and doctors regarding the recall. The letter instructs surgeons to immediately stop using Exactech implants in all knee and ankle replacement surgeries. Doctors and hospitals are also instructed to return their existing inventory of recalled devices for replacement.

As for surgery patients who already have an Exactech knee replacement system implanted, the recall letter instructs them to consult with their doctors. Doctors are advised to maintain an index of all patients with Exactech implants and closely monitor them for signs of potential insert failure.

Exactech also provided doctors with a draft letter to send to their patients - you may have received that exact letter -  explaining the recall.

If you have an Exactech knee or ankle replacement implant system, signs that the implant may have failed due to the defective insert include pain and swelling, inability to bear weight on the joint, grinding in the joint, or instability in the knee or ankle. Surgeons are instructed to take X-rays when a failed implant is suspected to evaluate the status of the Exactech implant.

Medical device manufacturers like Exactech have a legal obligation to ensure that their products are safe when used for their intended purpose and free of any harmful flaws or defects. The Exactech recall notice effective admits that the Exactech knee and ankle replacement implants were defective and, therefore, Exactech can be held liable for injuries and damages resulting from that product defect.

Anyone who had an Exactech knee replacement implanted after 2004 may be able to bring a product liability lawsuit if that implant subsequently failed and they had to undergo revision surgery. Plaintiffs who bring a successful Exactech knee recall lawsuit would be entitled to damages for (a) pain and suffering; (b) medical expenses incurred in treatment and corrective revision surgery; (c) and any lost income or wages incurred as a result of the knee implant failure.

Reports on Exactech implants in the FDA’s Manufacturer and User Facility Device Experience (MAUDE) indicated the devices were failing at an abnormally high rate compared to other implants. These early onset failure MAUDE reports are representative of the increased rate of incidents of which Exactech had become internally aware several years ago. There are currently so many complaints about Exactech implant devices in MAUDE that a search maxes out (at 500). So it cannot show all the Exactech complaints.

These failures prompted product liability lawsuits in 2016-2017 against Exactech by users who experienced premature implant failures. Our lawyers have gone back and read those lawsuits. The attorneys who filed those lawsuits did not understand why Exactech knees were failing. They were hovering around the problem. But these attorney did not - because they could not - fully understand why Exactech knees were failing.

These early Exactech implant lawsuits did understand that the high failure rate of these component parts was related to the “finned” design feature that is unique to the Exactech implants. These lawsuits accused Exactech of failing to warn consumers about this risk and instead pursued a “silent” recall in which they slowly replaced the finned design without recalling them. But the Exactech recall shed light on the specific oxygenation problem that caused these component parts to wear down.

Exactech’s phasing out of the finned design failed to reduce the abnormally high failure rate on their implant systems. This eventually led them to investigate other possible flaws which led to the discovery of the defective vacuum-seal packaging that prompted the recall notice.

Let's start with the more conservative settlement estimate. The average compensation payout in knee injury tort cases is roughly $110,000.  But the settlement amounts in the Exactech recall lawsuits will likely be higher.  You have a medical device company that a jury will see far less favorably than the average knee injury personal injury defendant. Punitive damages will be on the table. So at a minimum, you double the expected settlement amounts in these recall cases.  So let's estimate the Exactech settlement payouts at $220,000 using this method.

The liability of Exactech is pretty clear. The company practically indicts itself in its Dear Doctor letter. So liability is strong and the strong liability knee replacement lawsuits were many years ago.  So inflation has to be considered in the calculation.  In 2022, maybe the best estimate using this as a settlement amount marker is $300,000 for Exactech recall cases.

One of the first post-recall Exactech knee replacement lawsuits was filed in federal court in New York. The case, Burke v. Exactech Inc., 1:22-cv-020806 (S.D. NY), was filed on March 14, 2022. The plaintiff, James C. Burke, had the Exactech Optetrak Logic implanted in his left knee in 2013 and another one implanted in his right knee two years later. Burke’s Optetrak Logic implant only lasted a short time and the complaint claims that he suffered pain, instability, and bone loss in the years following the surgery. Eventually, Burke underwent extensive revision surgery in 2019. Her hired a personal injury lawyer to bring an Exactech recall lawsuit.

The product liability claims in Burke’s Exactech lawsuit rely heavily on Exactech’s February 2022 recall announcement of all Exactech knee and ankle replacement implant systems. The Burke complaint cites the recall based on the defective packaging and premature wear of the plastic liner inserts as evidence that the Optetrak implant was defective. He claims Exactech knew about these defective inserts and negligently failed to warn doctors and patients. Burke's Exactech recall lawsuit asserts that the premature failure of his Exactech knee implants after just six years was a direct and proximate result of “accelerated polyethylene wear” in the Optetrak inserts.

The Burke complaint asserts ten separate counts. But the primary theory of tort liability in the complaint is strict liability based on a manufacturing defect. Burke is seeking compensatory damages for his medical expenses and pain, as well as punitive damages.

If your Exactech knee replacement implant failed and you had to undergo corrective surgery, contact our legal team today at 800-553-8082 to see if you have a case. You can also get a free case evaluation online.