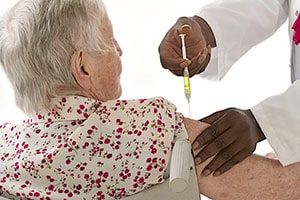 Zostavax was the first vaccine for the prevention of the herpes zoster virus which is commonly known as "shingles." Singles is caused by the same virus responsible for chickenpox which occurs during childhood. Shingles is basically the adult version of chickenpox and it most often affects people over the age of 50.

After an outbreak of chickenpox during childhood, the virus lies dormant inside nerve cells for years. In most people the virus never reappears, but in certain individuals the long dormant virus suddenly comes back to life as shingles later in their adulthood. Shingles is a very painful condition and causes a rash with significant blisters to appear on the skin.

Not long after the Zostavax was first released it became apparent that there was a problem with the popular shingles vaccine. For most people Zostavax worked exactly as intended without any side effects. However, in a certain percentage of people the Zostavax vaccine not only failed to protect them from shingles but actually caused them to develop a variant strain of the shingles virus that was more painful and difficult to treat.

All vaccines work on the same principal. They expose the body to a small, reduced strength sample of the virus which the body's immune system can easily block and destroy. Afterwards the person develops immunity to that virus. Developing a safe viral vaccine requires a delicate balancing act. The sample of the virus in the vaccine has to be diluted enough to prevent it from causing infection; but if the virus is too diluted the vaccine will actually make people more susceptible.

The more powerful strain of the shingles virus caused by Zostavax allegedly led to more serious physical injuries including: cardiovascular damage, chronic joint and muscle pain, and in some cases even death. The estimated value of a Zostavax case will vary depending on the level of injury involved. For our purposes we will break the potential cases down into 3 categories of injury.

Our first category will include Zostavax cases where injury is limited to development of the more potent strain of the shingles virus. There are no prior reported settlements or verdicts from other cases in which the injury involved development of the singles virus. We can, however, make comparisons to similar types of diseases or conditions for purposes of valuation. The basic symptoms of the shingles virus are somewhat comparable to bed sores (pressure sores or decubitus ulcers) which also cause skin rashes and underlying joint and muscle pain. Bed sores are frequently litigated in nursing home negligence cases so we have plenty of comparative settlements and verdicts. The average value range for a bed sore case is $100,000 to $600,000. Below are a few recent examples of nursing home settlements and verdicts involving bed sores:

This second group of Zostavax lawsuits covers cases in which the plaintiffs got the stronger version of the shingles virus and it caused more serious conditions or injuries such as cardiovascular conditions, vision or hearing loss, lymph node disease, etc. To estimate the potential value of Zostavax cases in this category we can look at other mass tort cases involving drugs which caused similar internal damage such as Pradaxa; Xarelto; and other dangerous drugs. Based on this comparison it is reasonable to estimate that Zostavax cases in this category will have a settlement value range of $1,000,000 to $3,000,000.

Our final category is for Zostavax wrongful death cases. In a small handful of cases the more potent form of shingles caused by the Zostavax vaccine led to major internal damages which eventually caused death. We can estimate the potential value of these cases by looking at other wrongful death settlements. The value of wrongful death claims often depend on the age and status of the person that died. The average value of a wrongful death for an adult is about $4 million for all types of cases. The average for the death of a minor is slightly higher at $4.5. A wrongful death claim for someone over the age of 65 is significantly less at $1.6 million.

You really need to keep in mind that this is just wild speculation. Absolutely no one knows what the settlement value will be for the Zostavax lawsuits. We are throwing a few darts on the board to try to guess about the possible range of settlement values in the Zostavax litigation because people want to hear theories and speculation on the monetary value of their potential claims. Remember, civil lawsuits are about money and there is nothing wrong with curiosity as to how much money you might get for your claim.