Tepezza® is a drug used to treat the symptoms of thyroid eye disease (TED). Soon after Tepezza was released on the market it was discovered that Tepezza can cause permanent hearing damage and/or tinnitus (ringing in the ears) in some patients. Patients who received Tepezza and suffered hearing damage are now filing Tepezza lawsuits.

If you received Tepezza infusions and subsequently suffered loss of hearing or other hearing issues, you may be able to file a product liability lawsuit and get financial compensation. Our lawyers are currently seeking Tepezza hearing damage cases in all 50 states. Contact us today at 800-553-8082 to see if you have a case. 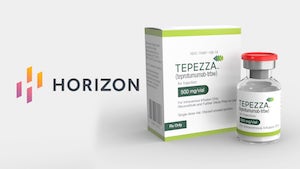 Tepezza (teprotumumab) is a new prescription drug that is used for the treatment of thyroid eye disease (TED) and a condition known as Graves’ eye disease. TED is a condition in which the eye muscles, eyelids, tear glands and fatty tissue behind the eyes become inflamed. The inflammation is triggered by an abnormal autoimmune response and it can cause the eyes to swell and obstruct vision.

Tepezza was developed by Horizon Therapeutics and it is still under its original patent protection. Tepezza was formally approved by the Food and Drug Administration (FDA) in January 2020. It was the first medication approved for the treatment of thyroid eye disease. Tepezza blocks a specific protein that is believed to be responsible for the development of TED. Tepezza is administered by injection about every 3 weeks for around 5 months.

Horizon obtained FDA approval for Tepezza based on very limited testing and without determining the exact mechanism of action of the drug. The clinical trial which Horizon used for the FDA approval of Tepezza included less than 100 patients.

During the FDA review and approval process for Tepezza, Horizon acknowledged that the drug presented some risk of hearing damage as a potential side-effect. However, Horizon represented to the FDA that the hearing loss was “temporary and generally of limited duration,” and claimed that this side effect occurred in less than 10% of patients.

Soon after Tepezza was released on the U.S. market, reports of serious hearing damage from patients and doctors began coming in. In early 2021, the results of new research studies on Tepezza showed that not only did Horizon grossly understated the risk of hearing damage associated with Tepezza, it also undersold how serious that hearing damage could be.

In March 2021 the results of a major study were published in the Endocrine Society journal which found that 65% of patients who received Tepezza reported some level of hearing damage or ringing in the ears. This is over 6 times higher than the estimated risk of hearing loss disclosed by Horizon during the FDA approval process. Additional case reports about the risk of hearing loss associated with Tepezza followed.

Horizon’s Failure to Warn About Tepezza and Hearing Loss

Horizon acknowledged to a limited extent in its warnings that hearing damage was a potential side effect of Tepezza infusions. However, the warning was grossly inadequate because it understated the level of risk and did not advise doctors (or patients) about the risk of permanent hearing damage or the need for monitoring. Horizon knew or should have reasonably known about this potential risk associated with Tepezza warned doctors and patients accordingly.

In the Summer of 2022, patients who received Tepezza and subsequently suffered hearing damage or tinnitus began filing product liability lawsuits against Horizon. The Tepezza lawsuits allege that Horizon negligently failed to properly warn doctors and patients about the true level of hearing loss risk presented by Tepezza.

At least 2 Tepezza hearing damage lawsuits have been filed against Horizon in federal court so far. The cases were filed in August and September in the Northern District of Illinois which is where Horizon has its corporate headquarters.

The plaintiffs in these Tepezza lawsuits claim that suffered hearing damage as a result of receiving Tepezza infusions for treatment of their TED. The lawsuits claim that the lack of an adequate warning about the risk of hearing damage from Tepezza left the plaintiffs and their doctors unaware of the potential harm that could be caused by the drug. The lawsuits bring claims based on negligent failure to warn and defective design.

Many more Tepezza hearing loss lawsuits are expected to be filed as more Tepezza patients suffer damage to their hearing. At this point, the Tepezza lawsuits have not been consolidated into a class action MDL, but if many more of these cases get filed that could happen in the future.

There is no way of knowing for certain how much Tepezza hearing damage lawsuits could potentially be worth in settlement or at trial. The first Tepezza cases have only recently been filed and there are too many variables at this stage to know for certain whether these cases will actually be viable or not. The best we can do is provide a reasonable estimate of what a successful Tepezza hearing loss lawsuit could be worth in a settlement.

Our attorneys predict that Tepezza hearing loss cases with favorable facts may have a payout value at settlement of $140,000 to $250,000. The precise value of a specific case will depend on various factors, including the age of the plaintiff and whether they had any preexisting hearing issues. Cases involving major, permanent hearing loss in plaintiff who are relatively young could be worth much more.

Our firm is currently seeking Tepezza hearing damage lawsuits across the country. If you took Tepezza for treatment of TED and you subsequently suffered hearing damage, hearing loss, or permanent ringing in the ears (tinnitus) contact our office today for a free consultation.