The purpose of this page is to explain the Medtronic Bone Infuse, how it works, and why suits are being filed around the country for injuries from this product.

The Medtronic InFuse Bone Graft is a product that helps patients to create bone in a number of difference situations. The way it works is complicated—it contains recombinant human bone morphogenetic protein (rhBMP-2), and provides a type of “scaffolding” to allow new bone to grow. It is approved for fractures of the tibia, degenerative disc disease, and two types of dental bone grafting procedures. Before this product came along, most patients would have bone harvested from the hip. Three years ago, Medtronic made over $900 million selling this product. In 2013, those sales are falling as the world gets wise to flaws of this products.

What injuries can the Medtronic Infuse cause? 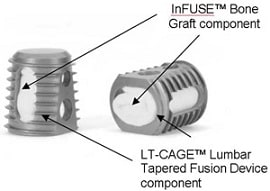 What did Medtronic do wrong?

Doctors are continuing to discover the problems with Medtronic’s Infuse. The 2011 issue of The Spine Journal was devoted to the Infuse and its high rate of medical complications. Through that report and other patient experiences, we learn that Medtronic rushed this product to the market, and fudged on their data to get it there:

The evidence indicates that Medtronic was probably illegally encouraging doctors to use the Infuse off-label—meaning, for a purpose other than that approved by the FDA. The FDA issue a warning to doctors and to Medtronic in 2008, telling them that off-label use in cervical spine (neck) procedures was a really bad idea.

Medtronic hired Yale to do a study figuring no one could attack Yale, right? Yale released its study in 2013. The results were not good and just confirmed why these suits are being filed in the first place. The Yale study also confirmed what we all knew: Medtronic-sponsored publications analyzed or reported their study results in biased ways to indicate that it was more effective than it really was. So, basically, Medtronic paid Yale $2.5 million to confirm their worst fears. Medtronic's reaction? They continue to defend their product.

This whole thing is such a mess and it is now coming to light. Now, there is a new class action lawsuit that has been filed by Medtronic shareholders coming from this whole mess. That's right. This scandal is so big that stockholders have filed suit alleging they bought Medtronic stock at inflated prices premised on lies about Infuse. Get this: The West Virginia Pipe Trades Health & Welfare Fund is the one that brought this legal action on behalf of all Medtronic stockholders. What does this tell us? The whole system was royally screwed up here. The burden of these mistakes were borne by the group that is often the pawns in these cases: the patients. It is just plain outrageous.

Meanwhile, this company can't get it through its thick head that something very wrong has happened here. In a June 17, 2013 press release, Medtronic said that a recent study shows that Infuse is "a safe and effective treatment option for patients in approved indications for use." This is the same study that found that it is difficult to find "clear indications" for the use of Infuse. The study also said we don't know yet whether it causes cancer and that there is no evidence that Infuse is more effective than natural bone graft in and that there is "some evidence of an association with important harms."

Oh, by the way, this is a Medtronic commissioned study we are talking about. Apparently, when you are not virtually bribing doctors to write good studies, even your own studies do not come out very well.

If you have used Medtronic Infuse for bone growth and have had any injuries, including additional surgeries, sterility, cancer or swelling, contact our team at 1.800.553.8082, or online. We are investigating Medtronic Infuse lawsuits nationwide.

For more information
Practice Areas
Client Reviews
★★★★★
They quite literally worked as hard as if not harder than the doctors to save our lives. Terry Waldron
★★★★★
Ron helped me find a clear path that ended with my foot healing and a settlement that was much more than I hope for. Aaron Johnson
★★★★★
Hopefully I won't need it again but if I do, I have definitely found my lawyer for life and I would definitely recommend this office to anyone! Bridget Stevens
★★★★★
The last case I referred to them settled for $1.2 million. John Selinger
★★★★★
I am so grateful that I was lucky to pick Miller & Zois. Maggie Lauer
★★★★★
The entire team from the intake Samantha to the lawyer himself (Ron Miller) has been really approachable. Suzette Allen
★★★★★
The case settled and I got a lot more money than I expected. Ron even fought to reduce how much I owed in medical bills so I could get an even larger settlement. Nchedo Idahosa
View More
Submit a Law Firm Client Review