Our team is charging a lower contingency fee for Parkinson's disease claims than many other Camp Lejeune lawyers.  Call us today at 800-553-8082 for a free consultation or reach out to us online.

Located in southeastern North Carolina, the U.S. Marine Corps base Camp Lejeune encompasses 156,000 acres. It has been a major base of operations for the USMC since 1941. Throughout its history, Camp Lejeune has provided residential accommodations for a base population of around 54,000.

Between 1953 and 1987, the groundwater at Camp Lejeune was contaminated with industrial chemicals, primarily the chlorinated solvents perchloroethylene (PCE) and trichloroethylene (TCE). The levels of these chemicals in the Camp Lejeune water supply were several thousand times higher than the current maximum safe levels set by health agencies. During the 34 years of water contamination, it has been estimated that anywhere between 700,000 and 1 million people lived or worked at Camp Lejeune.

So for three decades spanning the 1950s to the 1980s the water supplied to the Marine Corps Base at Camp Lejeune in North Carolina was dangerously contaminated with harmful chemicals. In response to concerns about the impact of this contamination, the federal government launched numerous public health investigations and studies to assess the health effects the contaminated water had on Lejeune residents. 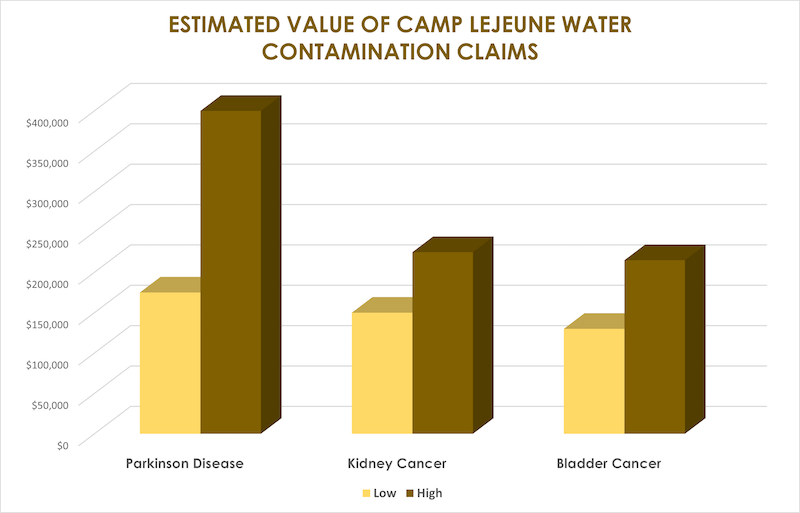 In response to concerns about the potential adverse health effects of the water contamination at Camp Lejeune, the federal government has funded several major public health studies. The purpose of these studies has been to assess and evaluate what disease and adverse health conditions may have been caused by exposure to the chemicals in the Lejeune water.

From 1991 to 1997, the Agency for Toxic Substances and Disease Registry (ATSDR), which is a branch of the Centers for Disease Control, conducted a public health assessment of Camp Lejeune. This included a detailed reconstruction of the estimated contamination levels in the drinking water systems.

The exposure information compiled by the ATSDR has been used in numerous epidemiologic studies of health effects on Camp Lejeune residents. These studies examined several different health outcome “endpoints,” including birth defects, adverse birth outcomes, cancer, and mortality rates. The findings of these studies were published in 2014 (2014 ATSDR Study).

In 2009, the National Research Council (NRC) released a report entitled Contaminated Water Supplies at Camp Lejeune: Assessing Potential Health Effects (2009 NRC Report) This report was requested by Congress as a means to independently assess the potential health outcomes that may have been caused by the Lejeune water supply. The primary finding of the 2009 NRC Report was that there was a clear link between the Camp Lejeune water and higher rates of kidney and bladder cancer. The 2009 NRC Report also noted evidence of higher birth defect rates.

The four primary symptoms of Parkinson's are tremor, or trembling in hands, arms, legs, jaw, and face; rigidity, or stiffness of the limbs and trunk. You also see bradykinesia, or slowness of movement; and postural instability, or impaired balance and coordination. As these symptoms become more pronounced, patients may have difficulty walking, talking, or completing other simple tasks.

In some people the disease progresses more quickly than in others. As Parkinson's disease progresses, the shaking, or tremor that you see with most Parkinson's patients - often interferes with daily activities. Other symptoms may include depression and other emotional changes, difficulty in swallowing, chewing, and speaking; urinary problems or constipation, skin problems, and sleep disruptions.

A new law passed in 2012 obligated the Department of Veteran’s Affairs (VA) to begin providing health benefits to veterans with conditions that were deemed to be related to the Camp Lejeune water contamination. To assist the VA in determining what health conditions should be accepted as associated with the Camp Lejeune water, then a special committee of experts was assembled (the “VA Committee”).

One of the most meaningful conclusions made by the VA Committee was that there was convincing evidence to show that Parkinson’s disease was associated with exposure to chemicals in the water at Camp Lejeune. In the Clinical Guidance report, the VA Committee explained that this conclusion was based on evidence from 4 different sources, including the 2014 ATSDR Study:

This study involved  99 pairs of twins World War II veterans. One twin of each pair had been diagnosed with Parkinson's disease. Researchers took complied occupational histories from the veterans. They asked about all jobs and hobbies that might have caused exposure.
An industrial hygienist inferred likely exposures to TCE and five other industrial chemicals. The veterans were considered to have exposure to a chemical if their job exposed them to it a minimum of two percent of work time or one hour per week.
When the solvents were looked at individually,  TCE was associated with over a six-fold increase. This study has been replicated. The evidence is so strong we do not think the governement will argue at trial or at the settlement table that TCE does not cause Parkinson's disease.
Camp Lejeune Parkinson’s Disease Claims Under New Federal Law

Victims of the Lejeune water contamination disaster have been barred from bringing civil claims because of a strict statute of repose law in North Carolina. Congress is very close to enacting a new federal law, however, that permits Camp Lejeune victims the right to bring claims for their injuries.

Victims of the Camp Lejeune disaster will have a window of at least 2-years to file tort claims for injuries related to the water contamination. The law expressly removes the North Carolina statute of repose as a legal barrier.

(2) USE OF STUDIES.—A study conducted on humans or animals, or from an epidemiological study, which ruled out chance and bias with reasonable confidence and which concluded, with sufficient evidence, that exposure to the water described in subsection (a) is one possible cause of the harm, shall be sufficient to satisfy the burden of proof described under paragraph (1).

CLJA (b)(2). This language appears to suggest that CLJA claimants will not need to retain expert witnesses to support their claims as long as they can cite a study showing that their injury is associated with Camp Lejeune.

Either the VA Clinical Guidance and/or the Goldman Study could potentially be enough to establish causation for Parkinson’s disease under the CLJA burden of proof standard. This means that individuals who can prove that they lived or worked at Camp Lejeune between 1953 and 1987 and were subsequently diagnosed with Parkinson’s disease should have a successful claim under the CLJA.

How Much Are Camp Lejeune Parkinson’s Disease Cases Worth?

It is way too early to know exactly how much Camp Lejeune Parkinson’s disease cases under the CLJA could be worth. Many variables could significantly impact the potential value of these claims on a case-by-case basis.

Contact Us About a Camp Lejeune Parkinson’s Disease Lawsuit

If you lived or worked at Camp Lejeune between 1953 and 1987 and were subsequently diagnosed with Parkinson’s disease, contact our office today to see if you may be eligible to file a claim. Call 800-553-8082 or get a free online consultation.