Whenever someone is considering whether or not to pursue a personal injury lawsuit one of the most important factors for consideration is how much the claim will likely be worth. Another key thing prospective plaintiffs often consider is what their chances of winning or losing the case will be.

Unfortunately there is really no way to scientifically estimate how much a particular personal injury case in West Virginia (or anywhere else) might be worth. There are simply too many variables that can affect the ultimate value of case. However, we can get some idea of average value ranges by analyzing all the publicly reported settlements and jury verdicts in West Virginia personal injury cases.

There are a number of legal information services that track and report verdicts and settlements for legal research companies like Westlaw and Lexis. This means that the results and case details of every jury verdict in West Virginia civil injury cases going back at least 20 years is searchable. This includes jury verdicts in favor of the defendant(s). In addition to jury verdicts, these databases also include out-of-court settlements that are publicly reported. Most settlements are private, so the data on settlements only includes a fraction of all cases.

On Westlaw, jury verdict and reported settlement data for West Virginia dates back to about the mid-1990s with anything before 2000 being limited to jury verdicts only. A search of this data for West Virginia shows a total of 1,074 verdicts and reported settlements in civil tort cases involving personal injuries. This includes everything from simple auto accidents to major medical malpractice and pharmaceutical liability cases. Public reporting of settlements in West Virginia appears to be somewhat less common compared to other locations so the majority of the cases in this database are jury verdicts. 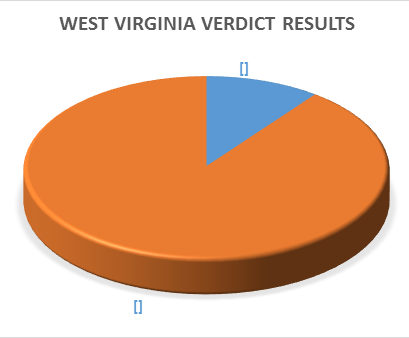 One of the first things that jumps out from an analysis of the personal injury verdicts and settlements in West Virginia is that there are surprisingly few defense verdicts. Out of the 1,074 total cases only 111 were verdicts in favor of the defendants (i.e., the plaintiff lost and got nothing). This indicates that personal injury plaintiffs are winning 90% of the jury trials in West Virginia.

Even though this is somewhat skewed by the inclusion of reported settlements which only get counted as Plaintiff Wins, this is still a very high ratio of plaintiff success compared to other jurisdictions. When you do the same search of verdicts and settlements in most other states defense verdicts usually account for half of the total results or more.

If we take out the 111 defense verdicts we are left with a total of 963 personal injury verdicts and settlements in which West Virginia plaintiffs got financial compensation. An analysis of the total amounts awarded shows that the vast majority of these cases were valued at $100,000 or less. Just over 83% of the verdicts or settlements were under $100,000 with the majority being in the $20,000-$50,000 range. This is fairly typical for most jurisdictions because the majority of tort cases involve auto accidents. Damages in auto accident cases are generally lower compared to other types of personal injury cases. 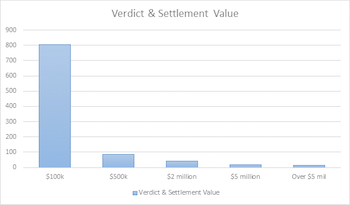 Below are sample summaries of some of the West Virginia verdicts and reported settlements in personal injury cases.

Do you have a possible personal injury case in West Virginia? The injury lawyers at Miller & Zois can help you evaluate the potential value of your claims and bring a lawsuit. Call us at 800-553-8082 or get an online consultation.