Truvada® is one of a group of five HIV drugs developed by Gilead Sciences in the last two decades which use tenofovir disoproxil fumarate (TDF). Truvada was one of Gilead's very first TDF drugs and it was used by countless patients for the treatment and prevention of HIV and AIDS.

Patients who used Truvada (or other TDF drugs) for treatment of HIV are now filing product liability lawsuits against Gilead. If you or a family member took Truvada (or another Gilead HIV drug) and suffered kidney damage or bone problems, you may be entitled to financial compensation. Call a Truvada lawyer at 800-553-8082 or get a free online consultation.

A new Truvada product liability lawsuit against Gilead Sciences was recently filed by a large group of over 25 individual plaintiffs. All of the plaintiffs are Florida residents, so the case was originally filed in the Middle District of Florida. However, Gilead promptly filed a change of venue motion and the plaintiffs agreed to have the case transferred to the Northern District of California (Harlan, et al. v. Gilead Sciences, Inc., 4:22-cv-03156-JST).

The Complaint in the Harlan case is 171 pages long and contains very detailed factual allegations regarding Gilead and its development of Truvada and other HIV drugs with TDF as the active compound. The Complaint asserts that before Truvada was released, Gilead was already aware that TDF was harmful to kidneys and bones and that long term use of the drug could result in serious damage. The Complaint also accuses Gilead of developing a safer alternative drug (TAF) and then deliberately withholding it for 10 years in order to “extend the longevity of its HIV drug franchise and make billions two times over."

In addition to wrongfully withholding the safer alternative drug, the Harlan Complaint accuses Gilead of failing to provide adequate about Truvada to doctors and patients thereby obscuring the true risk of the drug. Specifically, the Harlan plaintiffs allege that limited warnings provided with Truvada were not strong enough and prevented doctors from taking appropriate steps to monitor patients for signs of bone and kidney damage.

The Harlan plaintiffs each assert tort claims against Gilead for strict liability, negligence, and fraudulent concealment. The Complaint also sets forth the specific physical injuries each plaintiff allegedly suffered as a result of taking Truvada or other Gilead HIV drugs. The kidney injuries alleged by the plaintiffs included chronic kidney disease and total kidney failure. Bone injuries alleged by the plaintiffs included bone demineralization, osteoporosis, and bone fractures.

After being moved to the Northern District of California, the Harlan case was consolidated for pretrial discovery with a growing number of other product liability cases against Gilead involving Truvada and other HIV drugs. 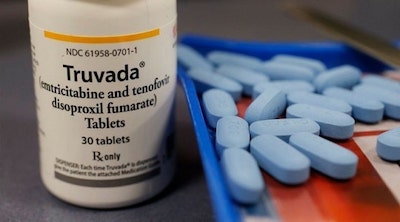 Truvada was one of the first brand name HIV drugs developed by Gilead sciences using TDF (tenofovir disoproxil fumarate). TDF was a new and unique type of antiviral drug developed by Gilead in the early 2000s. The introduction of Truvada was truly a blessing. It proved to be highly effective at containing HIV.

Human Immunodeficiency Virus (HIV) is a "retrovirus" that uses a specific enzyme inside the body called the RT enzyme to fuel cell growth. TDF blocks the RT enzyme which deprives HIV cells of the fuel they need to grow and duplicate.

The FDA first approved TDF for use back in 2001 and Truvada was the second brand name drug released by Gilead using TDF. Truvada and the other TDF drugs were considered groundbreaking medical advancements as it was the first treatment that was effective at halting HIV. TDF drugs like Truvada and later Viread significantly changed the outlook for people living with HIV and millions started using them on the daily basis.

The downside of Truvada was that the amazing benefits of TDF for treating HIV took a very heavy toll on the body. TDF must be taken at high doses to be effective. From the beginning, Truvada came with an extensive list of significant side effects. Gilead identified loss of bone density and kidney problems as potential side effects.

The lawsuits against Gilead are not simply based on the fact that Truvada caused kidney failure and bone damage. Truvada was saving the lives of people with HIV, so bone and kidney damage were considered acceptable risks in the absence of a safer alternative drug. The problem is that there was a safer alternative drug available and Gilead sat on it until the patent on TDF was about to expire.

Even before the release of its first TDF drugs, Viread (2001), Gilead was well aware that TDF posed a safety risk to patients' kidneys and bones. These problems were obvious in the preclinical data for TDF. By the time Truvada was released in 2004, Gilead's knowledge of the toxic effects of TDF had only grown based on adverse event reporting from patients using Viread.

Before Truvada was even approved by the FDA, the research division at Gilead had already developed a new alternative to TDF that was just as effective but much safer. Gilead's new drug was called tenofovir alafenamide fumarate (TAF) and it was essentially a new and improved version of TDF. Not only was TAF more effective at slowing the growth of the HIV virus, but it also was not toxic to the bones and kidneys which made it much safer than TDF.

The development of TAF as a better, safer alternative to TDF presented Gilead with a major business dilemma. Gilead could have patented TAF as early as 2002, but at that point, the company was already making billions on Viread and was on the verge of releasing Truvada which would increase revenues even more. Viread and Truvada were under patent protection for the next decade. Gilead realized that if it launched the new, safer, TAF drug it would immediately kill the market for the Viread and Truvada causing Gilead to lose 10 years of patent-protected revenues.

Rather than end the guaranteed revenues from Truvada and TDF early, Gilead made the very deliberate decision to slow-walk the release and approval for its new TAF drugs until the Viread and Truvada patents were almost expired. Gilead could have released the safer, more effective TAF drugs 8 years earlier but chose instead to prioritize profits over patient safety.

Over the last 5 years, product liability lawsuits have been filed against Gilead on behalf of thousands of Truvada and Viread patients that have suffered kidney failure or serious bone fractures.

Plaintiffs in these lawsuits allege that Gilead intentionally designed its TDF Drugs to be unreasonably and unnecessarily toxic to patients' kidneys and bones, while it purposefully withheld a safer design of the drugs for more than a decade to increase profits. The lawsuits further allege that Gilead gave inadequate warnings about the risks and safe use of the TDF Drugs. The tort claims asserted against Gilead include (1) Strict Liability (Design Defect & Failure to Warn), (2) Negligence and Gross Negligence, (3) Fraud by Omission, and (4) violations of various state consumer protection laws.

The TDF lawsuits against Gilead have never been formally consolidated into a new mass-tort MDL. Gilead filed a motion with the JMPL seeking MDL consolidation in 2019. But that request was subsequently withdrawn. However, an "unofficial MDL" for the TDF lawsuits has emerged in the Northern District of California (N.D. Cal.).

The net result has been the formation of an "organic" MDL. This unofficial MDL currently has around 40 TDF product liability cases against Gilead involving just over 2,200 individual plaintiffs. Additional TDF lawsuits are pending in federal courts across the country that have not been transferred to the Northern District of California. There are also a large number of Viread and Truvada lawsuits pending in California state courts, where the California version of a mass-tort MDL has been established for consolidated proceedings.

The first jury trial in the TDF lawsuits against Gilead is set to begin in the summer of 2022. This first trial will serve the same role as a bellwether trial in an MDL.

When Will the Truvada Lawsuit Settle?

The expectation is that the Truvada lawsuits will not settle until, at the earliest, after the bellwether trial this summer.

Getting a Truvada Lawyer for Your Lawsuit

If you or a loved one has suffered a kidney or bone injury from Truvada, call our Truvada lawyers now at 800-553-8082 or get a free online consultation. There is no fee or cost unless you get financial compensation for your claim.