On this page, we will look at the Risperdal lawsuit alleging that the mental health drug Risperdal (risperidone) caused permanent health conditions including abnormal breast growth in males. 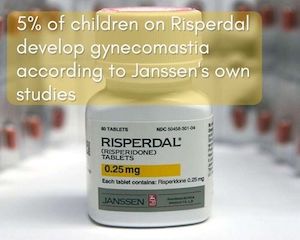 Risperdal is the popular brand name for Risperidone, which is a unique type of antipsychotic drug that has been in use since the early 1990s. Risperdal is most commonly used for the treatment of bipolar disorder, autism, schizophrenia, and other mental health conditions. Risperdal is a very common drug with over 4 million prescribed users in the U.S. Risperdal was developed and manufactured by Janssen Pharmaceuticals, a subsidiary of pharmaceutical giant Johnson & Johnson, but various generic versions are now available from other companies.

When Risperdal was originally released back in 1993, it only had FDA use approval for the treatment of schizophrenia in adult patients. Despite this use limitation, Janssen actively promoted the use of Risperdal to treat autism and bipolar conditions in children. This “off-label” use of Risperdal on children became very common.

Risperdal Linked to Dangerous Side Effects 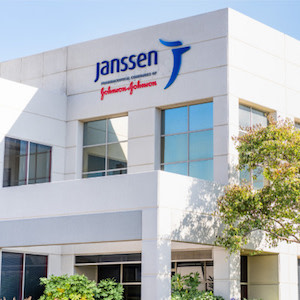 Studies have linked Risperdal use to several very serious and permanent side effects which have prompted a “black box” warning label on the drug. The FDA found that Risperdal increases a user’s risk of death from heart disease and pneumonia by 580%. Risperdal has also been conclusively linked with an increased risk of developing a rare, life-threatening disease called neuroleptic malignant syndrome.

In addition to these potentially fatal side effects and risks, long-term use of Risperdal has also been shown to cause several non-fatal, but debilitating health conditions. Numerous studies have established that Risperdal usage significantly increases an individual’s risk of developing chronic Tardive Dyskinesia. Tardive Dyskinesia is a neuromuscular condition that causes loss of muscle control and involuntary movements in the face and mouth. Tardive Dyskinesia has also been linked to other mental health drugs including Reglan (more info about Reglan lawsuits).

The most common and problematic permanent health complication caused by Risperdal is gynecomastia. Gynecomastia is the medical term for the growth of female-like breasts in males. While not life-threatening or dangerous, gynecomastia can cause serious emotional damage in male patients.

The link between Risperdal and gynecomastia was first announced in 2015 when the results of a long-term study were published in the Journal of Child and Adolescent Psychopharmacology. That study concluded that when Risperdal is used for extended periods by adolescent males it can cause them to develop breasts (gynecomastia). Specifically, the study found that Risperdal users under the age of 18 were 5 times more likely to develop gynecomastia than non-users in the same group. Although this might not sound like much, in the scientific study world this is a conclusive cause and effect link.

The reason why Risperdal causes male breast growth is related to a hormone called prolactin. Prolactin is a female associated hormone that stimulates breast growth in adolescent girls and facilitates lactation in pregnant women. For reasons that are not fully understood, Risperdal caused young males to overproduce this hormone, leading to breast growth.

The link between Risperdal and male breast growth was a hidden, undisclosed side effect of the drug. Thousands of individuals who developed gynecomastia from taking Risperdal have filed lawsuits against Janssen and other manufacturers. Still more individuals have filed Risperdal lawsuits after developing other serious, undisclosed health conditions including Tardive Dyskinesia, stroke, heart conditions, and diabetes.

The Risperdal lawsuits pending in federal courts across have been consolidated into a class-action MDL in the U.S. District Court in Philadelphia. There are currently around 7,000 individual cases in the Risperdal MDL.

Do You Qualify for a Risperdal Lawsuit?

How Much are Risperdal Lawsuits Worth?

Many Risperdal lawsuits have already gone to trial and resulted in verdicts. The lowest amount awarded to a plaintiff in these trials has been $500,000. Below is a summary of the Risperdal trials and reported settlements.

Risperdal Lawsuit Is Over?
Most of these Risperdal lawsuits settled in 2021.  Our law firm is no longer reviewing new potential Risperdal lawsuits.
Practice Areas
Client Reviews
★★★★★
They quite literally worked as hard as if not harder than the doctors to save our lives. Terry Waldron
★★★★★
Ron helped me find a clear path that ended with my foot healing and a settlement that was much more than I hope for. Aaron Johnson
★★★★★
Hopefully I won't need it again but if I do, I have definitely found my lawyer for life and I would definitely recommend this office to anyone! Bridget Stevens
★★★★★
The last case I referred to them settled for $1.2 million. John Selinger
★★★★★
I am so grateful that I was lucky to pick Miller & Zois. Maggie Lauer
★★★★★
The entire team from the intake Samantha to the lawyer himself (Ron Miller) has been really approachable. Suzette Allen
★★★★★
The case settled and I got a lot more money than I expected. Ron even fought to reduce how much I owed in medical bills so I could get an even larger settlement. Nchedo Idahosa
View More
Submit a Law Firm Client Review