The purpose of this page is to explain and update you on the Paraquat class action lawsuits and discuss possible settlement amounts in this litigation.  Our attorneys update this page regularly some come back to get the latest information on these lawsuits.

[September 13, 2021 Update:  There are now 181 lawsuits pending in the Paraquat MDL and the volume of new filings is expected to increase significantly.  The MDL class action judge recently issued an order requiring all incoming Paraquat plaintiffs to complete a Plaintiff's Assessment Questionnaire (PAQ). The PAQ is like a preliminary discovery request that requires each plaintiff to provide certain documents and answer a series of questions regarding their work and medical history and detailing their alleged exposure to Paraquat.]

[August 19, 2021 Update: Last month, Judge Nancy Rosenstengel held an initial conference with the plaintiff and defense counsels. She announced that she would set a schedule that will timely ensure that these Paraquat cases go to trial. The court anticipates that the first bellwether jury trial on Paraquat will begin on November 15, 2022. It also scheduled the final pretrial conference for October 27, 2022.

This may not feel like soon to victims who are eager for a settlement. But for plaintiffs' Paraquat lawyers, it is good news to get a trial date because it is the first big step towards getting victims the settlement compensation amount they deserve.]

Paraquat (paraquat dichloride) is an extremely toxic chemical that is used to kill weeds, grass, and other unwanted vegetation. Despite being banned in many countries, Paraquat is one of the most widely used industrial herbicides in the world.

Paraquat is legal in the U.S., but the Environmental Protection Agency (EPA), classifies it as a “restricted use” chemical. This means that Paraquat can only be bought and used by commercially licensed users (mostly commercial farmers).

The Paraquat herbicide has been around since the early 1960s. The use of Paraquat has rapidly increased over the last 20 years because weeds have become resistant to other products. According to the EPA, Paraquat is currently the most commonly used type of restricted use herbicide in the U.S. Paraquat comes in liquid form and is sprayed onto crops in a variety of ways. Paraquat has a bright blue color and a distinctive odor.

The Paraquat lawsuit is reminiscent of the Roundup cancer lawsuit, a very successful litigation for victims. They are both used as a non-selective herbicide. With Roundup, the injury is not Parkinson's disease but cancer. 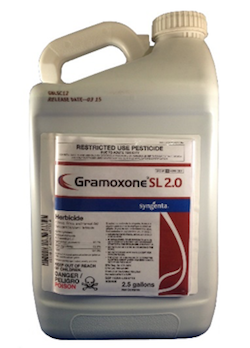 Paraquat is an extremely toxic chemical that is highly poisonous if ingested. There have been hundreds of reported cases of farmers committing suicide by drinking Paraquat. The health risks associated with Paraquat have led 32 countries to ban the chemical completely.

How toxic is Paraquat? In 2021, we told just about everything is toxic. So let's put Paraquat's toxicity in context. If you take one sip of Paraquat, it will kill you 70% of the time. So that tells you a lot.

So what other harm can this toxic chemical cause? Over the last 12 years, a growing body of scientific research has established that normal occupational exposure to Paraquat can cause Parkinson’s Disease.

Parkinson’s Disease is a neurologic disorder in which deterioration of certain cells in the brain gradually impairs the brain's ability to control motor functions in the body. Symptoms of Parkinson’s include impaired movement, tremors, lack of balance, and muscle stiffness.

One of the first studies showing a link between Paraquat and Parkinson’s Disease was published in the American Journal of Epidemiology in 2009. The study found that individuals who lived within 1600 feet of areas where Paraquat was regularly sprayed had a heightened risk of Parkinson’s Disease. The results of a more comprehensive study were published in 2011. This study concluded that there was a “strong association” between Paraquat and Parkinson’s.

These first 2 studies faced sharp criticism over study techniques and reliability because they were not “controlled” studies. In 2014, however, these doubts were put to rest when the results of 5 separate case-controlled studies were published in the Annual Review of Pharmacology and Toxicology.

These studies confirmed that exposure to Paraquat resulted in a greater risk of Parkinson’s Disease. This eventually prompted the EPA to announce in 2016 that it was conducting its own safety review of Paraquat.

On March 24, 2021, Greenpeace published “The Paraquat Papers.” This piece details the history of attempts by Syngenta and its predecessor, Imperial Chemical Industries (ICI), to conceal Gramoxone’s risks from the public. Allegedly, ICI claimed to have added the emetic PP796 in Paraquat products to prevent fatal poisoning.

Despite this claim, internal company documents revealed that it failed to do this. It also revealed that the company knew of this problem. ICI continued to publicly assert the emetic’s effectiveness. Additional documents suggest that it mischaracterized the addition of PP796 to keep Gramoxone on the market.

Jon Heylings, a former Syngenta toxicologist, also reported on the low PP796 levels in Gramoxone. He warned that the emetic levels were not enough to induce vomiting in individuals that swallowed the “minimal lethal dose.”

Heylings claimed that a former toxicologist for Imperial Chemical Industries (ICI), Syngenta’s predecessors, manipulated data to incorrectly suggest that humans were ten times as sensitive to PP796 than the other three animals that researchers used in tests.

He reported these issues to his superiors in several memos. Heylings argued that the former toxicologist’s data “misled” the business. He advised that higher PP796 doses would reduce the paraquat poisoning fatality rate.

A watershed moment in the Paraquat litigation may be when Heylings gives his deposition in the soon-to-be MDL class action lawsuit.

The link between Paraquat and Parkinson’s Disease may have been known to manufacturers for years, but it was never publicly disclosed. This means that companies who manufactured and sold Paraquat can be held liable for selling a dangerous product without proper warnings.

Individuals who used or were exposed to Paraquat and subsequently diagnosed with Parkinson’s may be entitled to significant financial compensation.

The first Paraquat Parkinson's disease Paraquat lawsuit was filed in Missouri in 2017 against Syngenta, the Swiss-headquartered, Chinese-owned agrochemical company that now makes the drug, and Growmark (another company that makes Paraquat products).

The plaintiffs in the lawsuit included farm owners and agricultural laborers who either applied Paraquat or worked on farms where Paraquat was used and later developed Parkinson’s Disease. Several other similar Paraquat weed killer lawsuits have been filed in other states since then.

There is now a Paraquat class action MDL. This means all Paraquat lawsuits in federal court will be consolidated under one judge in what is called an MDL.

As our Paraquat lawyers talk about in the update above, there will be a trial in November 2022. Right now attorneys on both sides are in the discovery phase of the Paraquat litigation. The judge in a July 14th Case Management Order that Randi S. Ellis will be the special master for this MDL. Ms. Ellis will work with both plaintiffs’ lead attorneys and defense lawyers to set a schedule for motions and discovery. She will also work on establishing discovery protocols, a plaintiffs’ database, and a procedure for selecting plaintiffs’ claims for trial.

If a class action MDL is created for the Paraquat Parkinson's lawsuits, it will probably lead to some type of global settlement in which all plaintiffs receive an agreed-upon settlement payout.

The product liability attorneys at Miller & Zois are currently seeking new Paraquat cases. If you used  or were exposed to Paraquat and you have been formally diagnosed with Parkinson’s Disease, you may have a valid Paraquat lawsuit.

Contact a Paraquat lawyer today to see if you qualify for a Paraquat lawsuit. You can reach us at 800-53-8082. You can also contact us online or text us with your questions at 410-431-1484. We monitor text messages nearly 24 hours a day.