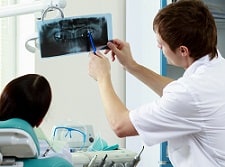 This pediatric dental malpractice lawsuit was filed by a minor boy's parents in Frederick County after defendants perform multiple procedures but fail to prescribe antibiotics, despite an infection. It was filed in Health Claims Arbitration on March 3, 2017, and is the 107th medical malpractice case filed in Maryland this year.

The next day the boy has several procedures done at defendant's office. These include removing decay, pulpotomy (removing diseased tissue within the crown part of the tooth), crown preparation, and root tip extraction. Despite multiple infections, no antibiotics are prescribed or given to the boy.

Eight days later, the boy returns to have an extraction of one of his abscessed teeth done. Once again, no antibiotic is given despite clear abscesses/infections in the tooth. Within twenty-four hours, the boy develops swelling in his face and mouth, fever, and pain in his head and mouth. His parents take him to the ER at Chambersburg Hospital in Pennsylvania where he is immediately given antibiotics.

An exam of the boy reveals significant right cheek and facial swelling, contusions, and bruising from an infection that has been left untreated. Studies reveal an abscess formation and a highly elevated white blood cell count. He stays at the hospital for five days due to the health threatening infection.

When he is discharged, he is followed by his pediatrician. He develops gastrointestinal problems due to the heavy antibiotic administration that became necessary to treat his infection as it was not treated promptly by the defendants. He develops a dairy allergy as well. Finally, the boy is terrified of receiving any medical or dental treatment due to the care he received from the defendants.

Have you suffered an injury due to the negligence of a dentist? If so, contact Miller & Zois today. Call us at 800-553-8082 or get a free online case review. We have a long history of obtaining large results in medical malpractices cases in Maryland, large verdicts and settlements.