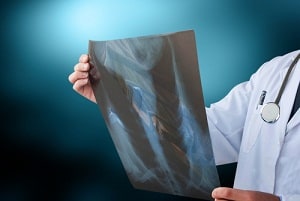 This is a failure to diagnose a hematoma lawsuit filed on behalf of a man in Talbot County, Maryland. It was filed on March 3rd and is the 106th medical malpractice case filed in Maryland in 2017.

An adult male has a T10 vertebral biopsy and a kyphoplasty at University of Maryland Shore Medical Center. Kyphoplasty is a procedure to treat a spinal compression fracture, usually a fracture caused by osteoporosis. The surgery is preferred of decompression surgery when possible because it is minimally invasive. This is an outpatient procedure. The surgeon discharges him home.

A few hours after getting home, the man's pain increases and he goes to the emergency room. He is admitted to the hospital. Within four days, he has paresthesia in his legs. His gait worsens, and an MRI reveals an epidural bulging bone at the T10 level. These results in severe stenosis and deviation of his spinal cord.

A day later, defendant reads the MRI to show no bulge but soft tissue swelling and possible fluid collection. Defendant anticipates this will resolve with time, despite the worsening gait dysfunction. He is transferred to the rehabilitation unit.

Due to his persisting complaints of gait dysfunction, another MRI is done. This time, defendant reports that it reveals an epidural hematoma with significant cord compression. He recommends a decompressive laminectomy and evacuation of the hematoma.

The man has the surgery done. After, he is a paraplegic and is confined to a wheelchair. Less than two years later, he dies as a result of complications of his immobility and medical conditions.

If you have been injured as a result of the negligence of a doctor, nurse or hospital, Miller & Zois can help you. We have a long history of results in medical malpractice cases in Maryland, earning large verdicts and settlements. Call 800-553-8082 today or get a free online case review.