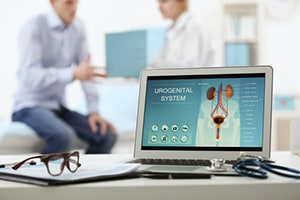 This is an invasive procedure medical malpractice lawsuit filed against Montgomery General Hospital, Chesapeake Urology Associates, and two urologists. This case alleges that one of the defendant doctors caused a mucosal avulsion injury to the patient's ureter during the surgical removal of a ureteral stone. It was filed in Health Claims Arbitration on May 5, 2017, and it is the 212th medical malpractice case filed in Maryland this year.

A man came into the Emergency Department at Montgomery Medical Center with a complaint of severe left flank pain. A CT scan showed a ureteral stone (proximal left ureteral calculus) and associated left hydronephorosis and proximal hydroureter. After an evaluation, the defendant doctor recommended cystoscopy with stent insertion, in preparation for extracorporeal shock wave lithotripsy, even though the Montgomery Medical Center did not have the means to perform the procedure. The defendant, instead, planned to attempt stone removal by other means, and if he was not successful, he would stent the left ureter and schedule a lithotripsy for a later date.

The defendant, after the planned cystoscopy with left retrograde balloon dilation of the left ureter, performed a ureterostomy and used a filiform-tip stone basket to extract the stone from the man's ureter. During the extraction process, the stone came out of the basket several times. When trying to re-grasp the stone, the defendant caused a mucosal avulsion injury to the ureter - there was a visible segment of ureteral mucosa in the stone basket. The procedure was then terminated without stent placement. For the purposes of urine drainage, a percutaneous nephrostomy tube was placed in the man's left kidney the next day, and a three-way catheter was placed for bladder irrigation. Ultimately, at a later date, the man would have to undergo surgical repair of the ureteral mucosal avulsion injury caused by the defendant doctor.

During a second cystoscopy, the second defendant doctor noticed that the left ureter was inflamed, and despite multiple attempts, it was not possible to pass a catheter and guidewire. The second defendant doctor also attempted to repair the man's ureteral mucosal avulsion injury with a ureteral implant, but he encountered a great amount of edema, a necrotic left ureter, and an edematous gonadal vessel. A general surgeon was called, who litigated the vessel, examined the bladder, and determined that they were not in good condition to continue the repair. Once again, the procedure was terminated.

The man remained at Montgomery Medical Center until he could recover from the multiple failed procedures well enough to seek treatment at another facility. Once stable enough for discharge, the man went home where he received continuing nursing care and physical therapy. A urologic surgeon at Johns Hopkins Hospital recommended reconstructive surgery, among other things.

While the man was recovering at home, he began developing left flank pain and a fever, and two days later he went to the Emergency Department at Hopkins. He underwent tube nephrostogram and nephrostomy tube replacement to treat his sepsis and pyelonephritis (kidney infection). He was discharged home the next day. One month later, the man was admitted to Hopkins for his ileal ureter construction. He later returned for post-operative outpatient care, including stent removal and nephrostomy tube removal. Although the reconstruction was a success, the man continued to suffer persistent left flank pain, hydronephrosis, and urinary incontinence as a consequence of his ureteral mucosal avulsion injury.

Specific Counts Pled Getting a Lawyer for Your Malpractice Claim