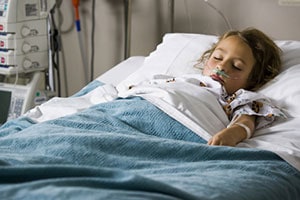 A girl is a patient at University of Maryland Medical Center. A PICC line (used for long term IV blood draws or medications) is placed in her left arm. A nurse intends to place a PIV saline lock line into a vein in the girls left arm for blood transfusions. She places the line and it remains there or five days during which time the girl receives several blood transfusions.

After five days, the girl has duskiness in her fingers which progresses to part of her forearm. A duplex vascular scan is done, which shows hemodynamically significant stenosis. It progresses to necrosis, causing all five of the fingers in her left arm to be amputated.

The girl's parents file this claim for her, alleging that the staff failed to properly place the PIV/Saline line in her vein but instead placed it into an artery, and then failed to monitor her change of status in failing to recognize the signs of vascular insufficiency.

Have you or someone you known suffered an injury due to the negligence of a hospital? Miller & Zois can help you get the compensation you deserve for the harm you have suffered. Call us today at 800-553-8082 or get an online case review.