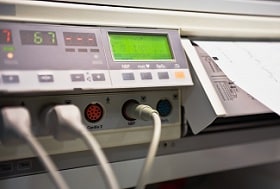 This birth injury claim was filed in Baltimore City after a delayed C-section caused a baby to suffer permanent injuries including cerebral palsy and periventricular leukomalacia. It was filed in Health Claims Arbitration on January 30, 2018, and it is the 57th medical malpractice case filed in Maryland this year.

A woman was transported from Civista Hospital to the University of Maryland Medical Center with a preterm premature rupture of membranes at 33 weeks pregnant. This was her third pregnancy and she had a history of pre-gestational and gestational diabetes, shoulder dystocia, and polycystic ovary syndrome.

When she arrived at the hospital she was experiencing contractions every four minutes. She was given Magnesium Sulfate to stop the contractions, Betamethasone to promote fetal lung maturity, and Ampicillin to prevent infection. An ultrasound showed an active fetus with healthy behavior appropriate for her gestational age of 33 weeks. The woman remained in the hospital for the next five days. During that time there was no continuous fetal monitoring and she continued to leak amniotic fluid each day.

On the fifth day after her admission to the hospital, the woman complained of painful contractions. The fetal monitor was put into place and showed that the baby was tachycardic, experiencing variable decelerations, minimal variability, and remained in the breech position. Essentially, the baby was in distress. Due to the breech presentation and non-reassuring fetal heart rate, the baby was delivered by C-section.

The baby was resuscitated and taken to the neonatal intensive care unit after birth, where she remained for 57 days. A head ultrasound showed ischemic changes, meaning that she suffered insufficient blood flow to the brain. She has since been diagnosed with cerebral palsy, periventricular leukomalacia, cortical visual impairment, seizures, and spastic quadriparesis.