Road rage accidents can be extremely scary experiences. It is always unsettling to anger a stranger and be totally at the mercy of his temper. And, as we all know, there are plenty of us walking around (and driving around!) with bad tempers just waiting to be set off. When that happens, our roadways in Maryland become treacherous places.

This article on the handling of temper induced car crashes addresses: 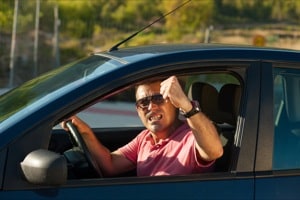 Road rage accidents are as scary as they are typical these days. Consider the following statistics: Half of all drivers who have been on the receiving end of an obscene gesture, been cut off, or been tailgated admit to responding by honking their horns, lofting their own obscene gestures, and tailgating or cutting off the other driver.

Some people, about 27 percent of those polled, admitted to screaming back at the other driver even though they knew they could not be heard. And the most frightening statistic to emerge is that 2 percent of drivers admitted to trying to run the aggressor off the road! Given the amount of admittedly hot-tempered drivers out there, it is easy to see how road rage accidents have become so common.

Unique Aspect of Maryland Law on Punitive Damages in These Cases

Under Maryland law and the language of the auto insurance policies written here, car insurance will not pay for punitive damages for intentionally caused harm. So if someone tries to crash into you in anger in a road rage type scenario, the insurer is not going to pay any punitive damages award (or any other damages for that matter).

But Maryland law seemingly allows punitive damages in uninsured and uninsured motorist cases. So if someone who has either no or limited insurance intentionally causes a collision, you can sue that driver for all damages, including punitive damages, and your own insurer is obligated to pay those damages. This surprises people and sounds illogical at first glance. But the law sometimes makes sense, not by looking at a piece of the puzzle, but by seeing the entire puzzle.

Example Case that Illustrates the Issues in Lost Temper Crashes 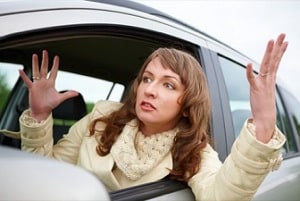 Nate is a real hot-headed guy. We all know some version of this guy. In high school, he was expelled from two different schools for fighting and using abusive language to other students and teachers. Even though he was punished for his anger problem, he never thought it necessary to get help. To Nate, a hot temper is the sign of a real man who is willing to defend himself in any confrontation. To say the least, physical confrontation is clearly something Nate does not avoid.

As Nate pulls out of his driveway, he hangs a quick right at the light and proceeds onto Wisconsin Avenue in Bethesda. As he drives along blaring loud, aggressive rap music and hanging his head out of the driver's window as he puffs on a cigarette, he notices that the man in the car in front of him is driving a few miles below the speed limit. That driver, Bob, is simply a careful driver who always abides by the speed limit. But to Nate, Bob’s slow speed is impeding his travel and, he thinks, is a direct act of disrespect aimed his way.

Nate, getting impatient and angry, starts to tailgate very closely behind Bob’s car to give Bob the message that he should get out of the way. But Bob, careful and patient, refuses to be rushed and chooses to ignore Nate. Being ignored, however, makes Nate extremely angry. He pulls into the adjacent lane and gets right up close to Bob’s window, giving him the finger and spewing profanity at him. Bob is startled, as anyone would be, but he continues to proceed carefully and to ignore Nate as best he can. Again, Nate hates being ignored. He decides he should sharply cut in front of Bob as a means of revenge.

As he cuts Bob off, Bob is unable to stop in time to avoid colliding with the rear of Nate’s vehicle. Bob loses control of his car, which flips over and slides off the road. Bob is paralyzed from the waist down and must be airlifted to a hospital where administering emergency aid failed to save the use of his legs. This accident, we would argue, is Nate’s fault and his insurance carrier should be made to compensate Bob for his injuries.

Example Road Rage Verdicts and SettlementsGetting a Lawyer for Your Claim

Road rage accidents are both scary and severe. If you have been the victim of an angry driver who caused an accident that left you injured, you may have a claim. At Miller & Zois, we have a track record of success and can help you evaluate and bring that claim. Please contact us at 800-553-8082 or get a free case evaluation online.

Road Rage Vehicle Accidents
Client Reviews
★★★★★
They quite literally worked as hard as if not harder than the doctors to save our lives. Terry Waldron
★★★★★
Ron helped me find a clear path that ended with my foot healing and a settlement that was much more than I hope for. Aaron Johnson
★★★★★
Hopefully I won't need it again but if I do, I have definitely found my lawyer for life and I would definitely recommend this office to anyone! Bridget Stevens
★★★★★
The last case I referred to them settled for $1.2 million. John Selinger
★★★★★
I am so grateful that I was lucky to pick Miller & Zois. Maggie Lauer
★★★★★
The entire team from the intake Samantha to the lawyer himself (Ron Miller) has been really approachable. Suzette Allen
★★★★★
The case settled and I got a lot more money than I expected. Ron even fought to reduce how much I owed in medical bills so I could get an even larger settlement. Nchedo Idahosa
View More
Submit a Law Firm Client Review
Our Firm ›
Attorneys ›
Medical Malpractice ›
Personal Injury Practice ›
Communities Served ›
Injury Victim Help Center ›
Plaintiff Attorney Center ›
Insurance Company Insight ›