The Commonwealth of Pennsylvania is the 6th most populous state in the U.S. and covers a very large geographical territory stretching westward from the Delaware River all the way to Lake Erie. Pennsylvania's large land area is traversed by more miles of roads and highways than any other state on the East Coast and the 11th most in the country. These roadways and the vehicle traffic on them range from congested urban sprawl around Philadelphia and Pittsburgh to rural farmland in places like Lancaster County.

The roads and highways in Pennsylvania are also somewhat infamous for being poorly maintained. The Keystone State consistently ranks at or near the top of the Wall Street Journal's annual States with the Worst Roads survey. The most recent WSJ report ranks Pennsylvania as 10th worst with almost 30% of its public roadways in "poor condition." These roads accommodate a large volume of vehicles. There are 4.6 million registered vehicles in Pennsylvania, 5th most in the U.S.

With 4 million vehicles and 250,000 lane miles of road crossing through diverse geography, Pennsylvania sees literally hundreds of car accidents every day. Anytime someone is physically injured in a car accident they may be legally entitled to financial compensation from the at-fault driver. This page will review: (1) Pennsylvania auto accident statistics; (2) Pennsylvania law on auto accidents and insurance; and (3) the value of auto tort injury cases in Pennsylvania based on recent settlements and verdicts. 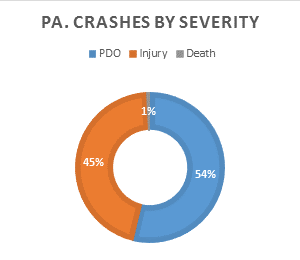 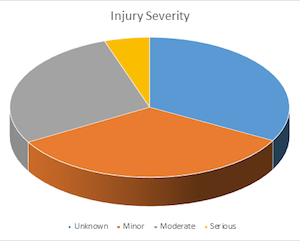 As the chart above clearly illustrates, fatalities are a rare occurrence in a car accident. Only about 1% of Pennsylvania traffic accidents result in death. Almost half of all reported auto accidents in Pennsylvania do involve some type of physical injuries. Most auto accident injuries are classified as minor but a significant percentage of traffic injuries are classified as moderate to serious.

Auto tort cases in Pennsylvania are shaped by 2 separate sections of state law: (1) traffic rules (i.e., stopping, speeding, yielding, and driver's exam stuff); and (2) laws on car insurance and who is financially responsible for an accident. Below is a brief summary of these various laws in Pennsylvania as they apply to auto accident cases.

Pennsylvania is an optional or "choice" no-fault insurance state. When Pa. drivers get car insurance they can choose between no-fault or standard policies. With a no-fault policy, your damages for smaller accidents are directly covered by your own insurance company. This saves time and hassle because there is no investigation into who was at-fault. With standard policies coverage is provided by the at-fault driver's insurer.

The statute of limitations on auto tort lawsuits in Pennsylvania is 2-years from the date of the accident. Pa. Code § 5524. So if you are hurt in a car accident you will need to sue the driver within 2 years or you will lose the right to bring a claim.

There are 2 exceptions to this 2-year limitation that are worth mentioning. First, if a child is injured in a car accident the 2-year limit on their individual claim doesn't start until they turn 18. Second, if the at-fault driver is a government employee you will need to send written notice of your potential claim within 6 months.

In most auto accident cases one driver is clearly and fully at-fault for the accident. For instance, if someone runs a red light and hits you they are 100% at fault. There are some accident situations, however, where both drivers are partly to blame. Pennsylvania applies the rule of modified comparative negligence in these cases.

Under this rule the jury allocates fault between the parties: Driver A = 20% at fault … Driver B = 80% at fault. Then the total amount of monetary damages gets divided based on these fault percentages. So in our example above if the jury awards $100,000 in damages, Driver A would only get $80,000. The damages get reduced by his 20% share of fault.

Pennsylvania law does have any special limitations or restrictions on the type or maximum amount of damages that can be awarded in car accident cases. Auto tort plaintiffs in Pa. are entitled to damages for:

One of the primary things most people take into consideration when deciding whether to pursue a lawsuit or injury claim after a car accident is how much their claim might be worth. The best way to get an idea of the typical value of auto tort cases in Pennsylvania is to look at reported settlements and jury verdicts in other recent car accident lawsuits.

If you need an auto accident lawyer in Pennsylvania, Miller & Zois can help. Call us today at 800-553-8082 or request a consultation online.