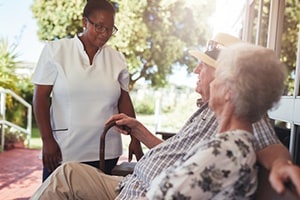 This nursing home lawsuit was filed in Maryland Health Claims Arbitration on February 17, 2017. It is the 85th medical malpractice case filed in 2017 in Maryland.

A man is admitted to FutureCare with cognitive issues. He has a history of wandering. Future Care received permission to place a device on him to prevent this after he wanders out of the parking lot twice. Two and a half years after his admission, he is found in the parking lot after falling out of his wheelchair. He has neck pain and body aches. He is transported to Baltimore Washington Medical Center, where he is diagnosed with a spinal fracture. He dies three days later as a result of these injuries. His children bring a survival action and wrongful death nursing home lawsuit against FutureCare.

Have you or a loved one sustained a serious injury due to the negligence of a doctor or nursing home staff? Miller & Zois can help you. We have a long history of obtaining large verdicts and settlements in nursing home malpractice cases throughout Maryland. Call 800-553-8082 today to speak to an attorney or get a free online case review.