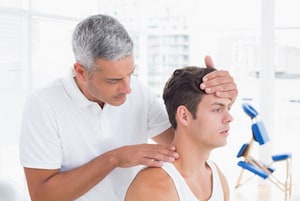 This surgical malpractice claim was filed in Montgomery County when a doctor allegedly improperly placed an implant to correct a woman's orbital floor fracture, causing permanent visual impairment. It was filed in Health Claims Arbitration on January 16, 2018, and it is the 24th medical malpractice case filed in Maryland this year.

A woman fell in her home and injured her right eye, but experienced no vision loss at that time. At Holy Cross Hospital a CT scan identified a right orbital blowout fracture with herniation of the right inferior rectus muscle and the intra-orbital fat through the fracture defect. In other words, the muscle and fat controlling eye movement were pushed through the part of her eye socket that had broken in the fall. Her vision and eye movement were still normal, so she was discharged home with instructions to follow up with a reconstructive otolaryngologist/plastic surgeon.

During the follow-up appointment, the doctor determined that the woman would require surgical correction. The fracture in her orbital floor was so large that it would have to be repaired with an implant. The woman underwent surgery two weeks later at Holy Cross Hospital. The doctor sized and cut the orbital implant to cover the fracture, placed the implant, and affixed it with three screws.

Immediately after surgery, the woman was unable to move her right eye, couldn't keep it open, and complained of double vision (diplopia). The doctor evaluated her one week later and said she was healing normally, even though she was still experiencing pain with eye movements, diplopia, and limited range of motion.

One month after the initial procedure, the woman underwent another surgery to repair her orbital floor fracture and remove the implant. Even though the second procedure was successful, the woman still experiences right nose and upper lip numbness, double vision, and up-gaze restriction. She uses corrective lenses, prisms, and scotch tape occlusion, but the severe double vision still impairs her ability to walk and drive safely.