Our law firm is handling da Vinci robotic surgery lawsuits involving hysterectomies and other surgical procedures. Most are medical device lawsuits, but some are medical and hospital malpractice claims involving these surgeries. While no one can be sure how these cases will unfold, we think the chances of fairly quick settlements for some of these cases - particularly the product liability claims - is relatively high. Do you have a claim or a question? Call 800-553-8082 or get a free on-line consultation.

2014 Update: Another big problem in these cases is that a morcellator was often used. These may cause cancer. Read this to learn more.

2016 Update: The products liability cases have largely resolved. The focus today is on medical negligence in the use of these procedures and the morcellator litigation discussed above. 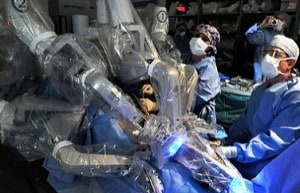 A hysterectomy is the removal of part or all of a woman’s uterus. The fallopian tubes and ovaries may also be removed. There are many different reasons that a hysterectomy may be performed such as for endometriosis, chronic pelvic pain, cancer, or abnormal bleeding. Usually, a hysterectomy for non-cancerous conditions should be considered after all less invasive options are considered.

The most common type of hysterectomy is open abdominal surgery. There are also what are known as minimally invasive procedures (MIP) for hysterectomies. Hysterectomies can also be done through a surgical cut in the vagina, as well as also be done by laparoscope, which is a tube with a lighted camera and surgical tools inserted through several small incisions made in the abdomen. Vaginal hysterectomies may also be laparoscopic-assisted.

There are several less-invasive options for treating painful uterine fibroids that cause bleeding. Uterine artery embolization (UAE) or uterine fibroid embolization (UFE) is where small particles are injected into the uterine arteries feeding the fibroids, cutting off their blood supply. A hysteroscopy is the insertion of a thin, telescope-like instrument through the vagina if the fibroid is primarily within the uterine cavity. Medication for pain such as non-steroidal anti-inflammatory drugs (NSAIDs) or drugs that block the ovaries' production of estrogen and other hormones may also be effective.

The da Vinci surgical system is a less invasive procedure that is used to treat a variety of conditions. The system combines computer and robotic technologies. Da Vinci touts itself as allowing major surgery with only a few tiny incisions and giving surgeons better visualization, precision, dexterity, and control than possible with using traditional surgical approaches.

The da Vinci's manufacturer - and even hospitals- claim that that:

For complex hysterectomies and other gynecologic procedures, robot-assisted surgery with the da Vinci Surgical System may be the most effective, least invasive treatment option. Through tiny, 1-2 cm incisions, surgeons using the da Vinci System can operate with greater precision and control, minimizing the pain and risk associated with large incisions while increasing the likelihood of a fast recovery and excellent clinical outcomes.

There is some truth to this. In the hands of the very best and experienced surgeons, this might well be true. But most surgeons do not have the skill and experience level to use it effectively. Da Vinci's manufacturer knows this full well.

OB/GYNs Are Fighting Back the Da Vinci Surgery Marketing Hype

Maybe you don't want to take a plaintiffs' attorneys' word for it. How about a great doctor? On March 14, 2013, Dr. James Breeden, President of the American Congress of Obstetricians and Gynecologists (ACOG) issued a statement about the use of robotic surgery. Dr. Breeden was worried about the effects of marketing and advertising promoting robotic surgery on women facing hysterectomies. Dr. Breeden said:

Some da Vinci robotic surgery cases may be close to a settlement. There are no guarantees. But they may begin to resolve pretty soon. For more information, call 800-553-8082 or get more information here.

Well said. There is no question that money is a driving force behind all of this. Of course, da Vinci's manufacturer wants to sell as many of these as they can. Hospitals get more patients - which means more money - by touting its latest "state of the art" equipment. Like many of these kinds of cases, the problems begin when companies and hospitals start putting profits ahead of people.

Doctors Using Da Vinci Surgery Do Not Get Enough Training

Dr. Breeden recognized that the outcome of surgery depends on the skill of the surgeon, that surgical skill takes experience and that robotic surgery is relatively new. Dr. Breeden says:

Expertise with robotic hysterectomy is limited and varies widely among both hospitals and surgeons. While there may be some advantages to the use of robotics in complex hysterectomies, especially for cancer operations that require extensive surgery and removal of lymph nodes, studies have shown that adding this expensive technology for routine surgical care does not improve patient outcomes. Consequently, there is no good data proving that robotic hysterectomy is even as good as—let alone better—than existing, and far less costly, minimally invasive alternatives.

Da Vinci robotic surgery is not only dangerous because the doctors who use them are inadequately trained, but they are also defective in the way they are designed and manufactured.

The da Vinci robots were not designed with sufficient insulation to protect against electrical current. This lack of insulation can cause severe surgical burns from too much current during use. In one case, it even led to the death of a 24-year-old woman undergoing a hysterectomy, where electrical current jumped from the da Vinci to the patient, severely burning her intestines and arteries, and causing her death two weeks after surgery.

If there is a better, safer way to manufacture the device, it should be done. I think they are working on it but they have to get this right. Also, the manufacturers of the da Vinci are not giving health care professionals information about these risks. In turn, the doctors and hospitals are then not able to adequately warn their patients about these risks. Some of these required warnings may include the dangers of using the device without adequate training and an idea of what amount and forms of training are adequate.

What to Do If You Have Been Injured

If you or someone you love has been injured by da Vinci robotic surgery, you need a lawyer you can trust to fight for you. Settlement negotiations in da Vinci claim cases may, as we said above, begin soon and hospitals are already reviewing potential settlements of these claims. Accordingly, you want to make your claim sooner rather than later. Call 800-553-8082 or get a free on-line consultation.

For More Information
Practice Areas
Client Reviews
★★★★★
They quite literally worked as hard as if not harder than the doctors to save our lives. Terry Waldron
★★★★★
Ron helped me find a clear path that ended with my foot healing and a settlement that was much more than I hope for. Aaron Johnson
★★★★★
Hopefully I won't need it again but if I do, I have definitely found my lawyer for life and I would definitely recommend this office to anyone! Bridget Stevens
★★★★★
The last case I referred to them settled for $1.2 million. John Selinger
★★★★★
I am so grateful that I was lucky to pick Miller & Zois. Maggie Lauer
★★★★★
The entire team from the intake Samantha to the lawyer himself (Ron Miller) has been really approachable. Suzette Allen
★★★★★
The case settled and I got a lot more money than I expected. Ron even fought to reduce how much I owed in medical bills so I could get an even larger settlement. Nchedo Idahosa
View More
Submit a Law Firm Client Review