It has now been a full year since Philips recalled millions of CPAP and BiPAP machines because they were causing users to inhale harmful and potentially carcinogenic chemical particles in their sleep. Since that time, a growing body of evidence has emerged to suggest that inhalation of these foam particles may be linked to several specific types of cancer.

We are still waiting for clinical research studies to give us a definitive answer about the causative connection between prolonged use of a Philips CPAP device and increased rates of cancer. But hundreds of former CPAP users are already filing CPAP recall lawsuits alleging that they developed different types of cancer as a result of the chemicals they were exposed to.

This post will provide an overview of the various types of cancer alleged by plaintiffs in Philips CPAP recall lawsuits so far. We will also look at some of the current scientific theories and evidence connecting the recalled CPAP machines to cancer.

The link above in the second paragraph takes you to 2022 CPAP updates.  Below are the 2021 updates.

December 15, 2021 Update: There are now 137 CPAP lawsuits in the MDL class action. This number is expected to grow to thousands.

December 13, 2021 Update: It is becoming increasingly clear that the CPAP lawsuits will be all about linking the injuries to Philips' negligence. Because the case against Philips is getting stronger.

FDA inspectors recently concluded their investigation into Philips and the CPAP machine recall that impacted millions of sleep apnea devices earlier this year. The FDA looked at internal emails, product testing, and operations reports at Philips to determine what led to the recall.

The inspection found hard evidence that staff at Philips knew about the problems with the sound abatement foam “but did not immediately act.” Evidence of this knowledge included 2015 emails from a Philips to an employee of the foam supplier and “at least 14 tests or assessments” dating back to 2016.

November 25, 2021 Update: Judge Conti ruled on the destruction of evidence dispute our CPAP lawyers talk about below. Her order permits Philips Respironics to contain to fix the defects on the recalled CPAP machines. But the order requires Philips to preserve evidence that may be important at trial by maintaining the recalled devices in their entirety and preserving and cataloging the foam at issue. This should prevent Philips from destroying the evidence needed to prove individual CPAP lawsuits.

November 17, 2021 Update: Earlier this year, Philips recalled millions of CPAP and BiPAP devices because sound abatement foam (PE-PUR Foam) in the machines was degrading and causing users to inhale toxic particles. In September, Philips announced an official “repair-and-replace” program for people with a recalled device. Part of this program involved replacing the problematic PE-PUR Foam with a new, silicone-based alternative foam.

Philips obtained preliminary FDA approval for this repair program based on testing results showing that the alternative silicone foam would be safe for use in the devices. But Philips can't shoot straight. Last week, the FDA suddenly withdrew its approval of the repair program after uncovering new evidence that the silicone replacement foam may also present health and safety issues. Now the FDA is requiring Philips to halt the repair program and have replacement foam re-tested by an independent laboratory.

The continued investigation into the Philips CPAP recall has also uncovered new internal emails showing that the company was aware of the problem with PE-PUR foam degrading as early as 2015. This means that Philips ignored this potential safety hazard for 6 years before taking any action.

November 16, 2021 Update: Here we go. Philips has already sought emergency relief from the judge's pretrial order governing the preservation of evidence in the CPAP recall. The plaintiffs' CPAP lawyers have already responded, arguing that the court needs more information from Philips before granting the relief sought.

November 12, 2021 Update: On Wednesday, the MDL class action Judge Joy Flowers Conti put out the first order to move the CPAP lawsuit forward. The initial status conference will be held on December 15, 2021, at 1:30 p.m. One big issue will be the selection of the lawyers who will lead the class action discovery for the plaintiffs.

November 1, 2021 Update: Last month, the MDL class action panel agreed with plaintiffs' lawyers that there should be an MDL class action lawsuit and it should be based in Pennsylvania. The Panel transferred the 114 CPAP lawsuits pending in federal court to a single judge in Pennsylvania. So if you file a federal lawsuit in California, Texas, New York, or any other state, it will get transferred to this court.

U.S. District Judge Joy Flowers Conti in Pittsburgh will preside over both CPAP consumer class action lawsuits and personal injury claims. Judge Conti is an experienced jurist who has sat on the federal bench for nearly 20 years.

Our CPAP lawyers expect tens of thousands of CPAP lawsuits will soon flood this court. As of now, 110 CPAP lawsuits around the country will be transferred to the MDL class action.

This latest update also includes the latest word from Philips on the specifics of the recall. Our lawyers update this page regularly. Come back to get the latest CPAP lawsuit updates.

At the start of September, Phillips issued a press release announcing that they now have formal FDA approval to repair recalled DreamStation and other CPAP devices.

Over three million existing sleep apnea devices were subject to the safety recall back in June after it was discovered that sound abatement foam in the devices was degrading causing users to inhale toxic chemicals.

When Phillips first announced the recall, it offered no options for users of machines with the toxic foam to repair or replace their devices. Now Philips claims to have the authorization and “service and rework capacity” to give help users of recalled devices.

In June 2021, the home healthcare product company Philips announced that it was recalling all of its CPAP and BiPAP machines. The recall covered an estimated 4 million devices that were used by millions of people every night for the treatment of sleep apnea and related conditions.

When the recall was announced, Philips admitted that the PE-PUR foam in its CPAP machines tended to rapidly degrade over time. Once the PE-PUR foam began to degrade it began releasing tiny particles into the air pathways of the device. These chemical particles would then be inhaled by the CPAP user all night long as they slept.

The inhalation of particles from the degraded PE-PUR foam presented a major health hazard to users because chemical analysis of the foam particles revealed that they contain several known carcinogens. In the recall announcement, Philips admitted that “lab analysis of the degraded foam reveals the presence of potentially harmful chemicals including Toluene Diamine, Toluene Diisocyanate, and Diethylene glycol. Philips also disclosed that testing showed the presence of Volatile Organic Compounds (VOCs) that could have “short- and long-term adverse health effects[.]”

Soon after Philips initiated the CPAP recall, the Food and Drug Administration (FDA) issued a public safety announcement recommending that individuals stop using recalled CPAP devices unless otherwise advised by their doctor. In the safety announcement, the FDA advised that inhaling the chemical foam particles in the CPAP machines could have “Toxic and Cancer-Causing Effects.”

The FDA included this cautionary statement about the potential cancer-causing risks posed by the recalled CPAP devices based on existing scientific research suggesting that the specific chemicals in the foam particles may be carcinogenic. At least 4 of the chemicals found in the foam particles have been shown to cause cancer in animal testing. This has prompted each of them to be classified as probably human carcinogens.

Based on the initial laboratory analysis results disclosed by Philips as part of the recall announcement, the foam particles in the recalled CPAP devices contained at least potentially 5 carcinogenic chemicals. These chemicals have been shown to induce various types of cancer in animal testing.

Chronic exposure to carcinogenic chemicals is well-recognized as a significant risk factor for the development of cancer. Certain types of chemicals can damage or alter DNA triggering gene mutations at the cellular level which evolve into cancer. Other toxic chemicals can lead to cancer by stimulating abnormal cell division.

One of the current scientific theories is that prolonged inhalation of the toxic gases emitted from chemicals in the foam particles of recalled CPAP machines will be directly linked to lung cancer because of the mode of exposure. Exposure through inhalation can also lead to the development of blood cancer such as leukemia, multiple myeloma, and lymphoma.

Inhaling and ingesting these black foam particles caused users of the recalled CPAP machines to metabolize the harmful chemical components in the particles. Digestion of these chemicals could potentially lead to other types of cancer that would not seem to be directly linked to CPAP treatment (e.g., kidney cancer, liver cancer, thyroid cancer, and breast cancer).

Our firm has been accepting new CPAP recall cases since the recall was first announced last year. Based on the incoming cases we have accepted, the most common types of cancer in Philips CPAP recall lawsuits so far are lung cancer and kidney cancer. These two cancers account for around 45% of all types of cancer being alleged by CPAP recall plaintiffs. 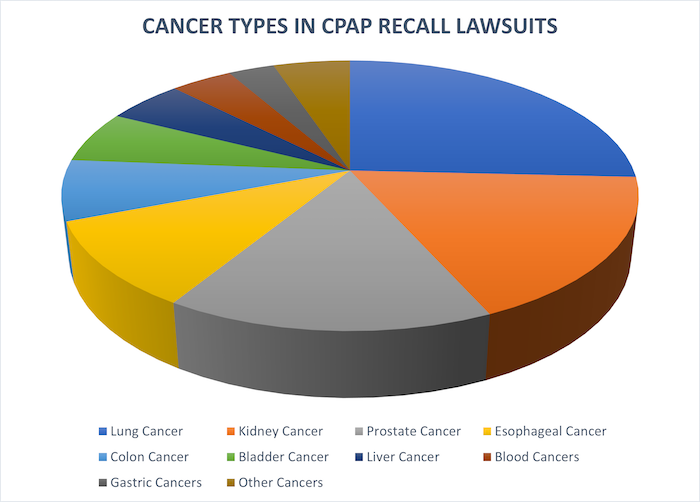 Chronic Inflammation from Recalled CPAP Devices May Cause Cancer

This research suggests that the chronic respiratory inflammation experienced by users of recalled Philips CPAP devices could contribute to higher rates of cancers in the areas of inflammation. This would include lung cancer, throat cancer, and other types of cancer involving the respiratory tract.

CPAP Cancer Victims May Be Entitled to Settlement

As more facts emerge about the Philips CPAP recall, it is becoming increasingly obvious that Philips was well aware of the potential issues with the PE-PUR degrading and being inhaled by users. Not only was Philips aware of the issue, they knew about it for years and chose to simply ignore it.

Philips chose to prioritize profitability over public health and safety. Now Philips is facing a wave of product liability lawsuits by former CPAP users who have been diagnosed with cancer and other health conditions.

If you have been diagnosed with cancer after using a recalled Philips CPAP device, you may be entitled to financial compensation. Contact us at 800-553-8082 for a free consultation.