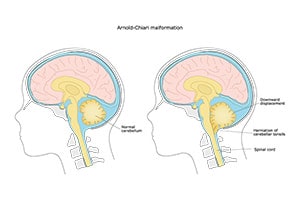 A 37-year-old teacher began experiencing headaches with tingling in her extremities, dizziness, and a feeling of "passing out" throughout the day. Her headaches were occipital, meaning that her pain extended from the back of her head and behind her eyes to her upper neck and back. She also had a medical history of achondroplasia and skeletal dysplasia (dwarfism), congenital pancytopenia (deficiency of the three cellular components in the blood), portal vein thrombosis (narrowing or blockage of the vessel that brings blood from the intestines to the liver), splenic vein embolization, and two spinal fusions.

An MRI showed tonsillar descent below the foramen magnum to the mid C2 level due to Chiari malformation - brain tissue was extending into her spinal canal. A CT scan revealed a loose screw in her C2 spinal fusion, but the fusion otherwise appeared to be in good order with no instability. Still, her consulting physician indicated that the hardware from the spinal fusion was getting in the way of her descended brain tissue and would have to be removed. All of the woman's symptoms were related to her Chiari, not her cervical spine, and yet her physician went ahead with a spinal fusion revision surgery.

The surgery included a spinal fusion from C1-C4, a laminectomy (removal of a part of the vertebral bone) of C1 and C2, removal of instrumentation from the prior spinal fusion, and Chiari decompression with duraplasty (a patch sewn into the brain and spinal cord's outer covering). The doctor's operative note indicates that the surgery was challenging due to the woman's anatomy, large tonsils, and high blood pressure in the brain due to significant cerebral spinal fluid pouring. In reality, it appears as though the doctor cut across the woman's vertebral artery while he was negligently inserting a new screw at her C2 vertebra.

After the procedure, the woman developed cerebral spinal fluid leakage. A CT scan showed a lesion throughout her cerebellum (the part of the brain at the back of her skull), associated with the postoperative accumulation of fluid. Despite the complications, the woman seemed to be recovering well, until she started to show signs of drowsiness, mumbling, left gaze preference, and delayed responses to stimuli several days after the surgery. An emergency head CT revealed new hemorrhages in her right parietal and left frontal lobes. Additional tests confirmed a reoccurring Chiari malformation and raised the possibility of a cortical venous thrombosis.

The woman's health continued to decline as she developed bilateral venous infarcts, and she had spasticity in her right arm and leg. She remained in critical condition for several days before her doctor performed a procedure to revise the previous surgical incision with irrigation, drainage, drain placement, and primary closure. Still, the woman continued to leak cerebral spinal fluid around the drain.

Finally, 44 days after the spinal fusion revision, the doctor performed a shunt placement to stop the leaking. She continued to experience issues including hemorrhages, poor wound healing, infection from the wound site, and deep vein thrombi in her extremities. During the remainder of her 77-day hospital stay, she required a tracheostomy, a gastronomy, a catheter, physical and occupational therapy, six weeks of IV antibiotics, and long-term oral antibiotics.