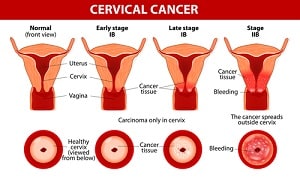 Carcinoma of the cervix is one of the most common malignancies in women, accounting for 15,700 new cases (6 percent of all cancers) and 4,900 deaths in the United States each year. Worldwide, cervical cancer is second only to breast cancer as the most common malignancy in both incidence and mortality. More than 471,000 new cases are diagnosed each year. During the last 50 years in the United States, the utilization of screening programs based on the Papanicolaou (Pap) smear and pelvic examination has led to a steep decline in incidence and deaths from cervical cancer.

Maryland, thankfully, has a comparatively low cervical cancer death rate. But the numbers are still too high and too many Maryland doctors miss cervical cancer at a stage where the patients could still be cured.

If you believe you have a potential malpractice claim call 800-553-8082 or get a free online consultation here.

Why a Missed Cervical Cancer Diagnosis Results in a Lawsuit

There are a lot of medical negligence suits involving cervical cancer for a simple reason: survival rate depends critically on early diagnosis. Women diagnosed early by their doctors generally have good outcomes. Early stage diagnosis has a 5-year survival rate of 80-90%. If cervical cancer is missed – either through malpractice, a defective test, or the symptoms were not noticed or recognized by the patient - survival rates decline. Stage II, III and IV cancer with the latter having only a 15% 5-year survival rate. Stating the obvious that goes with every cancer: an early and accurate detection is key to the best prognosis and mental and emotional well-being of women.

The Papanicolaou test (also known as Pap test or Pap smear) has been accredited to the significant decrease in cervical cancer deaths in the past 40 years. Before Pap tests, cervical cancer was responsible for the highest mortality rate among cancers affecting women. The annual direct costs of cervical cancer in the U.S. was estimated to be $6 billion before the introduction of the HPV vaccine (which has generated a lot of new interest of late in the Republican debates).

Pap tests screen for cell changes on the cervix or pre-cancers, which can give women a huge head start in knowing whether they are at risk. According to The American College of Obstetricians and Gynecologists, women are recommended to be screened every two years from age 21 to 30 and every three years thereafter, provided their last three tests were normal, until the age of 60 or 70 at which time, based on the patient's history, tests may be no longer be necessary. Approximately 55 million Pap tests are performed annually in the US. Approximately 3.5 million tests are abnormal.

Some cases that appear to be cervical cancer misdiagnosis cases are actually due to defective testing. This may be an unpreventable false negative or negligence on the part of the testing facility. Naturally, inaccurate test results – false negatives and false positives - can lead to anxiety and affect the overall health of a patient. But, of the two, false negatives are of greater concern. False positive tests are usually due to the presence of squamous intraepithelial lesions. A false positive test will require the woman to undergo further testing, possible biopsy and can result in undue pain and anxiety for the patient. It is estimated that false negative tests occur 5-50% of the time, 80% of these are true false-negatives, and 20% are due to laboratory error.

The accuracy of Pap tests can be diminished by several factors. They include incorrect timing of the test (should be conducted 10 to 20 days following a woman's last menstrual period to avoid blood in the sample), douching, and vaginal medicines and spermicides, used within 2 days of the test.  The problem is these can wash away or hide abnormal cells.  There are also clinician factors such as the incomplete or inaccurate capture of medical history and risk factors such as HPV, improper storage of slides, incorrect or unlabeled slides, inadequate sampling, performing the test in presence of an infection.  Accuracy can also be compromised by laboratory factors (misinterpretation or failure to identify cell type and poorly controlled technical process). Further lesions can be missed if they are small, invasive, or deep in the cervical canal.

A Lawyer for Your Failure to Diagnose Cervical Cancer Claims

Verdicts and Settlements in Cervical Cancer LawsuitsMore Information on Malpractice Claims in MarylandMore Information on Cervical Cancer
Medical Malpractice
Client Reviews
★★★★★
They quite literally worked as hard as if not harder than the doctors to save our lives. Terry Waldron
★★★★★
Ron helped me find a clear path that ended with my foot healing and a settlement that was much more than I hope for. Aaron Johnson
★★★★★
Hopefully I won't need it again but if I do, I have definitely found my lawyer for life and I would definitely recommend this office to anyone! Bridget Stevens
★★★★★
The last case I referred to them settled for $1.2 million. John Selinger
★★★★★
I am so grateful that I was lucky to pick Miller & Zois. Maggie Lauer
★★★★★
The entire team from the intake Samantha to the lawyer himself (Ron Miller) has been really approachable. Suzette Allen
★★★★★
The case settled and I got a lot more money than I expected. Ron even fought to reduce how much I owed in medical bills so I could get an even larger settlement. Nchedo Idahosa
View More
Submit a Law Firm Client Review