3M earplug hearing loss victims have been searching the Internet looking for what the $7.1 million earplug verdict means to their lawsuit. Our lawyers are reviewing these cases all over the country in every state.

At the end of this post, we will ask you to contact us to get your case started if you have not filed one already. First, let’s talk about this verdict and what it means to you.

The 3M Earplug Verdict on Friday 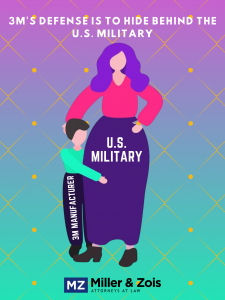 This Defense Failed at Trial

For the last five weeks, victims and lawyers have been eagerly watching on the sidelines and waiting for the results of the very first bellwether trial in the 3M earplugs litigation. With the federal courts still closed to the public, it was hard to get much information on what the jury in Sarasota was hearing. All people really knew was that the jury was hearing the claims of three military veterans with significant hearing loss.

At the start of last week, anyone reading the court’s pleadings got our first sign of how things were going when 3M’s defense team started last-ditch motions that had a strong odor of desperation.

Then, finally, on Friday afternoon, the news broke that the jury in this critically important test case handed the plaintiffs a major victory. Each of the 3 plaintiffs got $2.8 million in damages for a total 3M earplug verdict of $7.1 million.

The bellwether case included three individual plaintiffs who all filed suit against 3M back in 2016: Lewis Keefer, Luke Estes, and Stephen Hacker. All three of these plaintiffs shared very similar backgrounds and alleged injuries.

Lewis Keefer served in the Army from 2007 to 2015. He was stationed at Fort Benning, GA, and was deployed to Iraq in 2009. During his time in the Army Keefer was a medic, but he claimed he was regularly exposed to loud noise from weapons, munitions, and equipment while wearing his standard-issue Combat Arms earplugs. Keefer was diagnosed with bilateral tinnitus.

Luke Estes served in the Army from 2008 to 2017 where he was stationed at Fort Benning. Estes was a tank platoon commander, so he had the most exposure to loud noises and regularly wore 3M’s earplugs. Estes experienced the onset of hearing loss and tinnitus starting in 2014.

The third plaintiff, Stephen Hacker, also served in the Army during the same time frame and was stationed at a base in Kentucky. Hacker had regular exposure to loud equipment and weapons and alleged a similar pattern of hearing loss towards the end of his service.

At the end of the bellwether trial, the jury awarded Keefer, Lewis, and Hacker very similar damages. Each of them got $2.1 million in punitive damages, plus additional compensatory damages ranging from $160,000 to $350,000. 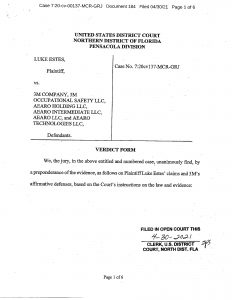 The size of the verdict came as a welcomed surprise to everyone on the plaintiffs’ side. Our lawyers were certainly expecting a win, but the size and breakdown of the verdict were surprising. An award of $2.8 million for each plaintiff is significantly more than most lawyers were anticipating and should be enough to put major financial pressure on 3M to resolve the remaining claims.

A $7 million verdict is drop in the bucket for a massive company like 3M. After all, 3M generates $32 billion in annual revenue and has a market capitalization of $115 billion.

But the 3M earplug litigation is the largest mass tort MDL in history and there are currently over 230,000 individual plaintiffs with active claims. Just start doing a little hypothetical math in your head to figure out how much it would cost 3M to settle 200,000. Even if the price tag per case is only $100,000 (which is literally a small fraction of what the jury just awarded) it would cost $20 billion to settle all the pending claims. That would be more than half of 3M’s entire annual revenue.

The most significant aspect of last week’s verdict was probably the punitive damages that were awarded. By giving each of the three plaintiffs $2.1 million in punitive damages (more than double the amount of compensatory damages) the jury made a VERY clear statement on how it felt about 3M’s conduct in this case.

That this jury in Sarasota decided that 3M deserved to be punished to this extent suggests that 3M’s defense did not play well. It is also a sign that the next bellwether trial in the earplugs MDL (which is set to begin in 2 weeks) will lead to another loss for 3M if they are foolish enough to try it.

Our law firm’s phones have been ringing off the hook since the 3M earplug verdict on Friday.  You would think – our lawyers would think – that every victim has heard about this litigation with so many television commercials and media coverage of the 3M lawsuits.  But so many soldiers who had been sitting on the sidelines have come out after the verdict.  Our lawyers have been getting calls, web inquires, and texts in massive numbers since the verdict was reported.

What Is Next After the 3M MDL Lawsuits Have Finished?

There are two more MDL trials on the schedule.  What happens after that?  Good question someone asked on one of our 3M earplug YouTube videos that I’ll answer here.

The MDL judge can do what she wants. She can order more trials in the MDL or she can send them back. Both parties will want to avoid the remand of this many cases and the MDL judge wants to resolve the lion’s share of these cases in the MDL. So sending back 250,000 cases is probably the least likely outcome.

One thing is for sure — letting this first case go to trial was a mistake. Our law firm is getting so many calls from people who were unaware of the litigation until hearing of the verdict. It is like they are colluding with plaintiffs’ lawyers to get as many cases as possible.
The other big problem 3M faces is that these verdicts have increased expectations, creating an anchor for many victims.  This is will increase the number of opt-outs in a global settlement and increase how long this litigation goes on for 3M.
So will 3M’s lawyers avoid making the same mistake twice and settle these cases before the next trial?  We will know shortly.

Getting a 3M Lawsuit Lawyer

If you are still sitting on the sidelines, you really want to move forward now to protect your rights. If you have concerns about bringing a case, let’s talk about them.
You can call us at 800-553-8082, get information online, or text us with your questions at 410-835-4103.
We are contingency fee lawyers.  There is no cost to bring a claim, and the consultation is free. So reach out to us right now.